Who are the victims! Two teenage girls in a motel were pulled over by a knife 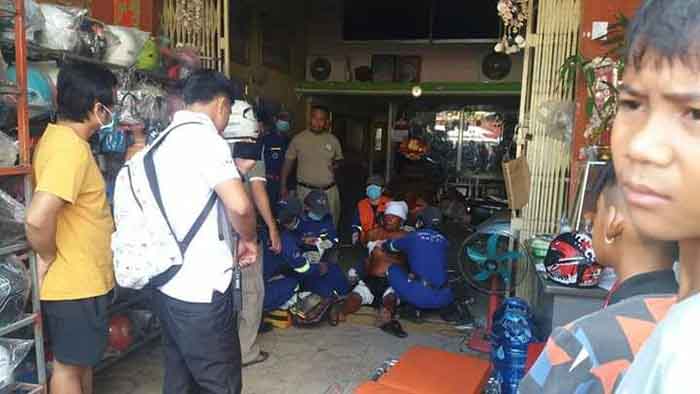 Who are the victims! Two teenage girls in a motel were pulled over by a knife

A 15-year-old girl was allegedly raped by a moto-taxi driver at a motel twice, and a third time, after being attacked by a knife-wielding girl, she was interrogated. . The incident happened at 9:40 am on June 1, 2020 at the "Reaksmey Chomvorn" spot in Prey Pring Village 2, Sangkat Chom Chao 3, Khan Por Sen Chey, Phnom Penh.

Authorities said the girl, 15-year-old Nina, was born in Sangke commune, Oral district, Kampong Speu province. The man, who was arrested and raped by her name, is Ros Sophat, 58, who lives in a Pochentong temple, and is a native of Dak Trang village, Boeng Trang commune, Samrong district, Takeo province.

According to the above girl, because of her poor living conditions, she left the district to Oddar Meanchey province at a friend's house, worked as a laborer, planted a lot of mangoes and harvested mangoes for just one month and found a job. She did not work because she was under age until she was asked to stay in a pagoda. Until the evening of May 31, he met a man named Ros Sophat, who had been trying to seduce her, saying that he had paid $ 20, but she refused. At 12 pm, the same day she was sleeping, the man touched her, causing her to panic. On the morning of June 1, the man told her that he would help her get a job and ride her motorbike to work and ask her to give him a $ 20 massage. She agreed to go with the man, dragged her into the "Reaksmey Choon Von" guesthouse, and then gave her a massage, and then raped her. Moments later caught her raped again, she tried to shout and shout and help but did not hear. Later, she started a third rape, but she pleaded with her to massage him, so he agreed to take the knife from the bag and cut him off, causing serious head injuries to be sent in the ambulance. Unit 711 was taken to the ambulance.

The girl was taken to the Porsenchey District Police Department for further questioning and legal action.