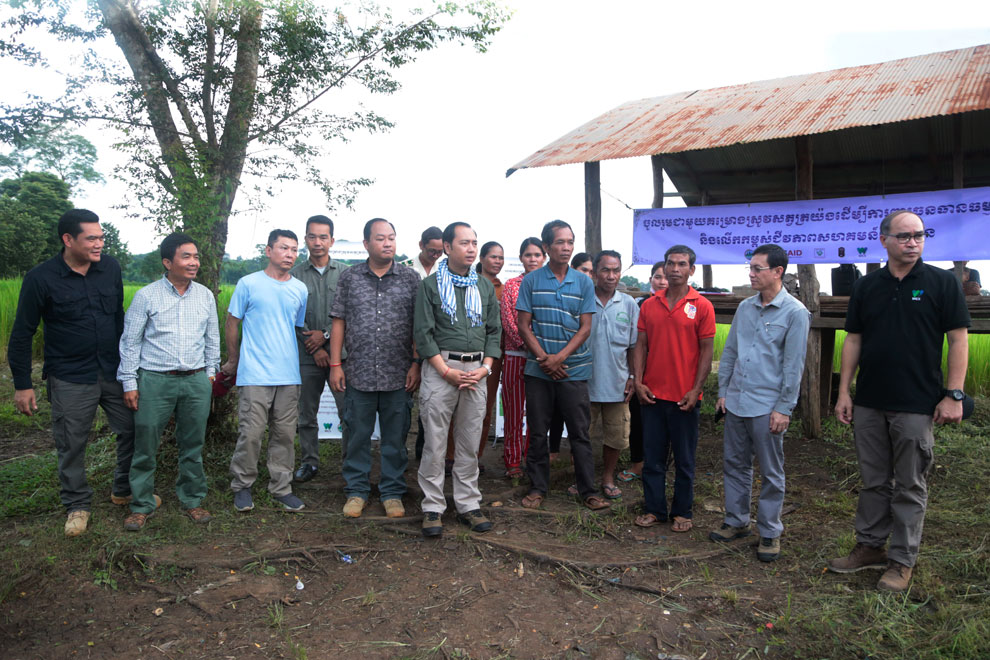 
Mondulkiri: The Wildlife Conservation Society of Cambodia (WCS) project has been expanding its project at the Keo Seima Wildlife Sanctuary in Mondulkiri province. With 78 farmers participating as members after the successful implementation of Preah Vihear province and wildlife sanctuary in Siem Pang district, Stung Treng province.

Ken Serey Ratha, President of WCS, said yesterday that the WCS Wildlife Rice Project has been extended to the Keo Seima Wildlife Sanctuary in Sre Preah Commune. Keo Seima district, Mondulkiri province, during 2019, the year of the pilot project, only 29 families participated. But until 2020, there are 78 farmers from three villages, including Pouchar, Pou Kong and Ochral villages.

According to Mr. Ken Serey Ratha, the implementation of this project in Mondulkiri province after the successful implementation of the Kulen Promtep Wildlife Sanctuary, Preah Vihear Province and the sanctuary Siem Pang wildlife in Siem Pang district, Stung Treng province. Farmers who are members of the project get to buy back rice from them at a higher price than the market between 1,200 and 1,700 riel Riel per kilogram according to each type of rice.

"We require member farmers to follow the key principles associated with respecting the environment and protecting natural resources," said Serey Ratha. In particular, rice should be grown in accordance with organic principles that do not use chemical fertilizers, pesticides and other pesticides on the cultivation of They and we monitor their farming activities regularly.

Secretary of State Neth Pheaktra and spokesman for the Ministry of Environment yesterday could not be reached for comment.

However, he said during a visit to Mondulkiri province on October 7 that on behalf of the Ministry of Environment, he supported Principles and conditions set by the Sroy Trayong rice project for farmers to implement and abide by the principles from the buyer of rice back to farmers Higher than the market.

He said that the factors that motivate farmers to participate in this project because they see the benefits of the rice project. This project makes them sell rice at a high price just by following the principles set by WCS on conservation work. Environment, natural resources and wildlife. In addition, use land that is not from encroachment on forest land.

“Farmers must adhere to the principles of technical cultivation, with training from WCS officials and development partners to Make all the rice grown quality and show compliance with the correct technical standards as well as meet the requirements of the host country Buy this rice.

Mr. Pheaktra asked WCS to expand the rice project to other areas with protected areas that the organization has signed an agreement with the Ministry. Environment to expand organic rice production. In particular, improve the livelihood of local people and protect the environment. These are the policies of the Royal Government of Cambodia to increase the local economy or provide new jobs for the people.

Klot Ke, 51, a resident of Pochar village, Sre Preah commune, said yesterday that his family had joined the Sroy Satrayong project. During 2019, the rice has already been harvested. He observed that there was a big difference before joining the project and during the membership, that is, when joining Get more rice every year and also sell rice at a higher price.

"This project has made my family more profitable from selling rice and selling rice at a higher price," he said. Previously. In addition, I have learned many techniques with WCS to grow rice, and I would like to call for such a project forever and expand. Go to other areas because it makes our lives much easier. ”