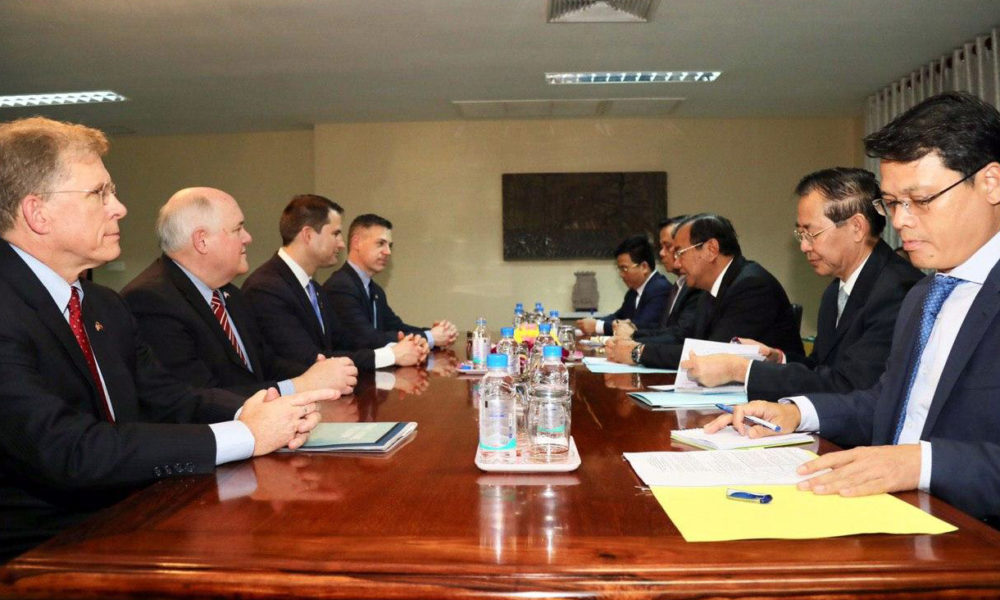 US Congressional Republicans and Democrats have confirmed that they will help improve US-Cambodia relations, especially pledging to respect sovereignty without interfering in Cambodia's internal affairs. According to Koy Kuong, spokesman for the Ministry of Foreign Affairs.

"We have a meeting with Deputy Prime Minister Prak Sokhon on the 22nd of January," he told reporters following a meeting with Cambodian Deputy Prime Minister Prak Sokhon. Particularly debated, especially in relation to matters of concern in the past. For the United States, there are two parties that work well together, and we see the democratic model in America, despite the differences, we always work well together.

"We always work together, even at different parties, but we talk about the interests of the American people. We also talked about American concerns about Cambodian sovereignty, which we recently raised about Cambodian law. ”

"The two sides also discussed how to improve the relations between the two countries, however, in this regard, the United States pledged to respect Cambodia's sovereignty," he said.

Regarding the issue of whether Cambodia is allowed to have foreign military bases on Cambodian territory, the Deputy Prime Minister confirmed to the US side that this was a rumor, and so far, the Prime Minister has made clear that Cambodia does not allow There are no foreign military bases on its territory. At the ASEAN-US Summit in Bangkok, the Cambodian general also made clear that this was just a rumor.

Koy Kuong said the two sides also discussed Mr. Sokha's hearing. The Deputy Prime Minister confirmed that the proceedings against Mr. Kem Sokha were clear and transparent, especially with the attendance of some 58 representatives from the embassy, ​​political parties, NGOs and NGOs.

As for the US-Cambodia relationship, Koy Kuong stressed that Cambodia has a clear strong desire to improve the relations between the two countries. In particular, Samdech Akka Moha Sena Padei Techo Hun Sen was the first leader in ASEAN to respond positively to President Donald Trump inviting all ASEAN leaders to attend the ASEAN-US Special Summit, which will be held on the 14th of November. This coming March.

What is important is that the US side emphasizes that not only Mr. Trump's administration's intentions, even the two congressional parties, want the US-Cambodia relationship to improve, in fact, the three visiting lawmakers, the spokesman said. Meet the Deputy Prime Minister to the Democratic Party and the other two Republicans to the same position, though from different parties The US also wants better relations with the country.