Update: Experts are investigating the identity of a large drone that crashed in Koh Kong province 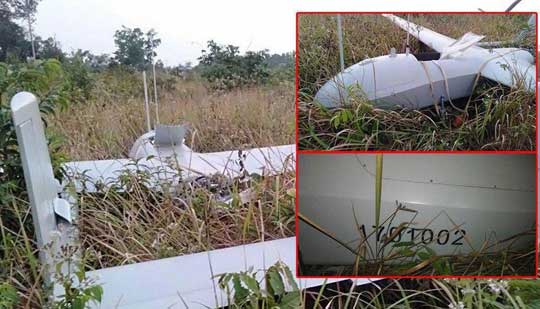 Update: Experts are investigating the identity of a large drone that crashed in Koh Kong province

Phnom Penh: After a large-scale drone crashed in a wooded field near Peam's house in Koh Kong village, Koh Kong commune, Kiri Sakor district, Koh Kong provincial police chief claimed that the task force was still unable to identify it. No, it is continuing to request the principle of the CMAC and the Air Force for technical research Services. According to the BBC broadcast.

As of 5 pm on January 17, 2020, Koh Kong Provincial Police Chief Sam Kit Vien said that due to the fact that the police force from the National Police had visited the scene, the police could not determine. Identify the source of the nearly 10 meter drone.

According to the Koh Kong Provincial Police, following a consultation, the police commissioner requested a CMA unit officer to assist in the search for the explosive charge of the explosives to protect the safety.

When the plane's explosive search was ready, the matter was clear: Provincial authorities and the Ministry of Defense requested more intervention from the Ministry of National Defense for removing the pieces to Phnom Penh. January 18th. Therefore, the cops continued to guard the premises, so no results were obtained.

A resident of Buth Son, a resident of Koh Kong, Koh Sdach commune, Kiri Sakor district, Koh Kong province, spotted a 9.70-meter drone crashed in a grass field near the house around 6 pm on January 16, 2020. Also reported to the authorities for immediate review.

Koh Khin Police Chief Sam Khut Vien also said that there were indeed drones at the base of the people, with large white IDs 170,1002, length 5m and wingspan of 4.85. The total meter is almost 10 meters.

Khim Chandy, Kirir Sakor district governor, said according to reports from the people that the plane crashed or landed, there was no sound of what was heard, and then informed authorities, police, police and commune chiefs. The source checks are beyond the ability of the district administration, so only the skilled forces can do so.