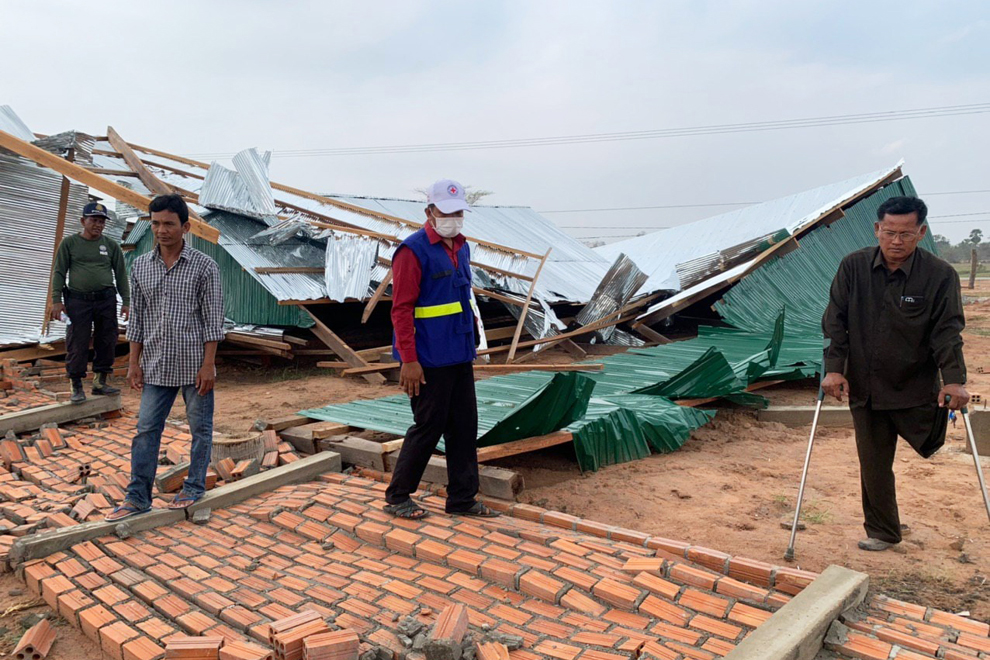 
Phnom Penh: At least seven people were injured as nearly 400 houses, including shops, schools and rice mills were damaged. Damage caused by wind gusts in the first two months of this year. This is according to data from the National Committee for Disaster Management yesterday, but does not include the latest cases.

Seak Vichet, spokesman for the National Committee for Disaster Management, told the Post that in the first two months of this year, there were 11 gusts of wind. Injured 7 people and damaged 388 houses in Battambang, Svay Rieng, Banteay Meanchey, Oddar Meanchey, Preah Vihear, Kandal and Preah Sihanouk provinces, including houses Nine boats were completely damaged and two rice mills, one school and one fishing boat were damaged.

"Typically, strong winds occur from May to the end of November, but this year it has changed abnormally," he said. Has been around since the end of January. The most common province is Battambang.

According to Vichet, climate change is driving this phenomenon abnormally.

Especially now, Cambodia is in the transition period of changing from autumn to dry season, which will cause some areas to receive rain. Light to moderate, with mixed gusts of wind and thunder.

At the same time, he called on people living in areas vulnerable to this phenomenon to increase vigilance for personal and group safety. Families by planting large trees around the house to help keep the wind out and not use electronic devices as a source of electricity when available No thunderstorms.

Poipet Mayor Keat Hul also told the Post that 26 houses were made of corrugated iron in Poipet commune. And Sangkat Phsar Kandal collapsed and the roof was badly damaged after heavy rain and strong winds on the afternoon of March 3, 2021.

"The rain and wind on Wednesday afternoon was really scary, it was raining and it was raining," he said. "Ten houses and 16 houses have their roofs opened."

According to Hul, more than 200 Poipet City Units Commanders have intervened to help rehabilitate poor families affected by the typhoon. Each family distributed 25 kilograms of rice, 6 bottles of fish sauce, 6 bottles of soy sauce and 1 box of noodles.

"As of 3 pm on Thursday [yesterday], our team has helped repair the houses of the villagers," he said. 15 houses have been damaged by the wind. No later than tomorrow morning [Friday], we will continue to help repair them all at once.

Forty houses in three communes in Battambang province's Rukkiri district were also badly damaged by heavy rains. Big, mixed with strong gusts of wind on the afternoon of March 2, 2021. This is according to Mr. Chhe Mab, Rukkiri District Inspector yesterday.

He said that after heavy rain and strong winds on Tuesday afternoon, authorities had compiled statistics on the backs of damaged houses. In Stok Pravek commune, the police found 22 houses with open roofs, while in Prey Tralach commune, 13 houses were found. Open roofs and in Muk Rah commune, 5 houses and 1 rice mill collapsed. But no one was injured or killed in the incident.