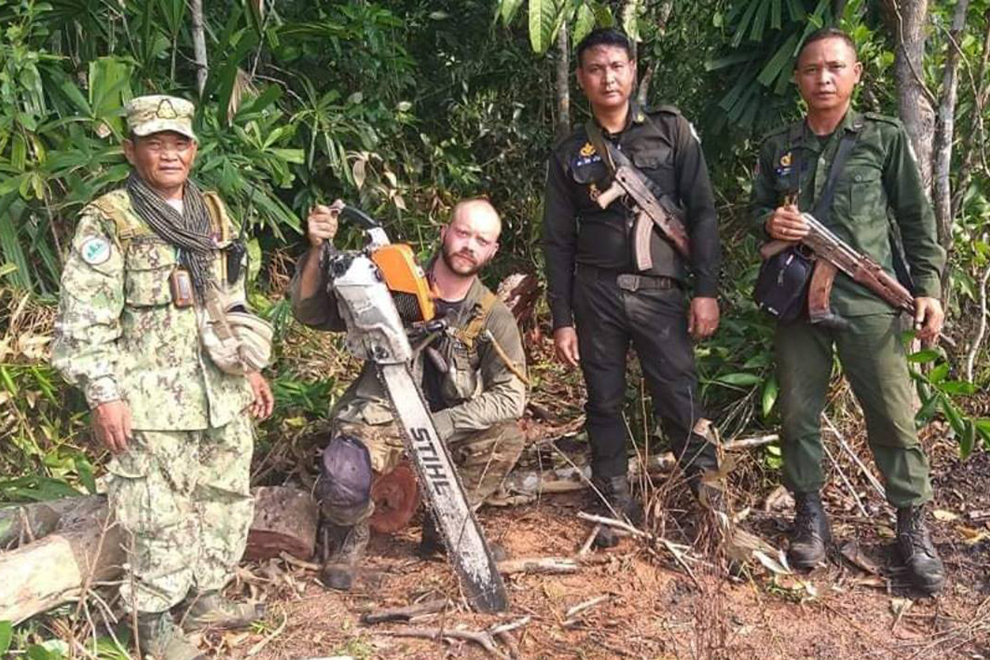 
Pursat: Ministry of Environment officials and Wildlife Alliance detained two men and confiscated 73 cubic meters of illegal timber 8 32 vehicles, 36 birds, and other misconduct equipment during a forest patrol in the Cardamom Mountains South a full week ago.

WildlifeAlliance released a full week of patrol reports on March 24, despite the outbreak. The Corona virus, but Ministry of Environment officials and wildlife allies continue to fight illegal logging and hunting activities. Constantly, to defend The last major rain forest in Southeast Asia.

Reportedly, a week ago, rangers and NGO officials patrolled the southern Cardamom rainforest as a result. Includes: 2 perpetrators, confiscation of 73 cubic meters of illegal timber and 15 pieces of lumber, 8 vehicle confiscation 32 units and lifts.

Chan Sokha, a military police chief in Pursat province's Kravanh district, said yesterday that his authority had been involved in a crackdown on forest crime. Frequently with specialist officials, rangers, the Ministry of Environment and officials of Wildlife Alliance. But in the event of a normal patrol trip where no offense occurred, the group did not ask for his strength.

“If there is a crackdown on a major crime, there is a suspect, or there is a lot of evidence. But we just patrol the jungle, he does not suggest. My strength has been steadily cracking down on crime, despite not being asked by other professional forces, especially following the National Anti-Trafficking Commission regulations Illegal deforestation, arson, cracking down of trucks, cracking down on illegal loggers .

Kuch Veng, a representative of the Pursat Forestry Community, said yesterday that deforestation was still ongoing, with perpetrators stopped. Used trucks to transport wood in the forest, but they came back to the tractor. Logging activities are changing, too, and they return to the night, since officials and community members are down during the day Patrols bother them.

“I am not afraid to patrol the forest anymore because I have had several court cases 3 Complaint.

So I did not dare to patrol the forest or go out to work away from home, even though I said many things I am under surveillance from the court, ”he said.

It should be reminded that the Royal Government of Cambodia has issued a decree on the establishment of the South Cardamom National Park since May 2016, covering an area of ​​41,0392. The hectare is located in the provinces of Koh Kong, Pursat, Kampong Speu and Sihanoukville.

The sub-decree requires the Ministry of Environment to cooperate with relevant partners, including provincial and territorial authorities, to ensure environmental protection, conservation and Biodiversity and sustainable use of natural resources.