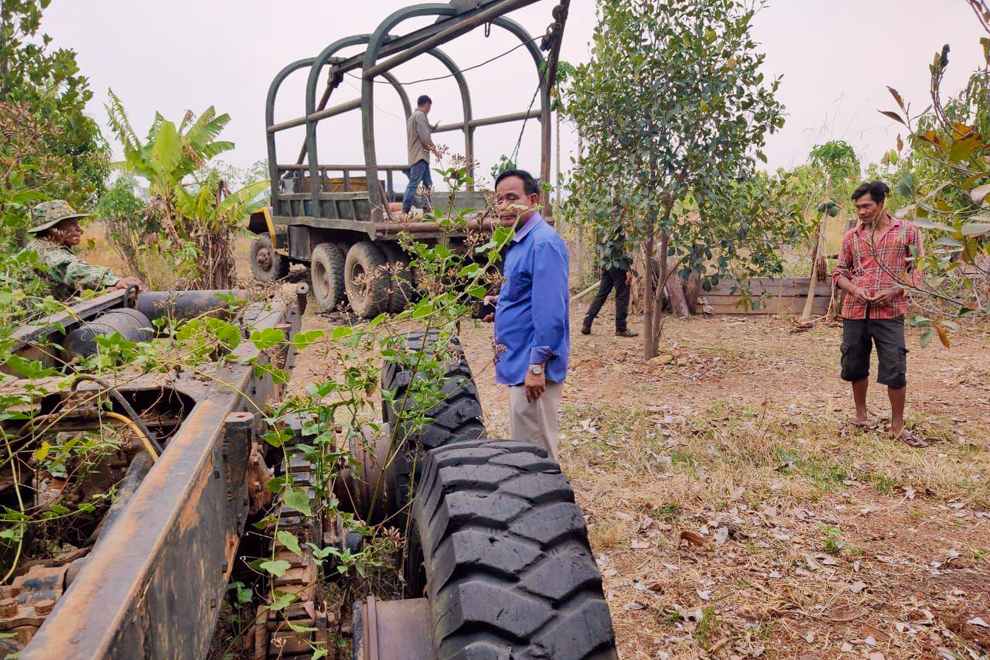 On March 23, a police force in Veal Veng district fired arson vehicles and fired on them. All three are in the Samkosos Wildlife Sanctuary. Prior to the discovery of the three vehicles, Veal Veng district military police led by Menchil, deputy chief of the RCMP on March 21 Cooperate with Wildlife Alliance to crack down on forest crime in Stung Thmey village, Pramom commune, Veal Veng district. He said at the time that three cabs had been found to be illegally transporting wood, the owner had escaped.

“After the competence of the experts, we confiscated the above evidence and handed it to the Phnom Samkou Wildlife Sanctuary for further proceedings,” he said. This 23rd day (yesterday), we cut it into pieces and burned it down. Nearly 20 units.

“The job is to continue working with the Wildlife Alliance to find the perpetrators and exhibits that serve the song. Break the forest, ”he said.

Phan Sopheanin, director of Phnom Samkol Wildlife Sanctuary, Pursat province, said yesterday that in the three months to 2020, the suspects would not be released. More than 10 Phnom Sampok forestry offenses were arrested and sent to Pursat Provincial Court for processing The law.

Currently, forest crime and wildlife shooting have been relatively quiet since it was in collaboration with Wildlife Alliance, the official said. (Wildlife Alliance) supports regular patrolling of the forest. Sometimes there is community involvement in patrolling.

“Our patrol work today has been difficult as we have encountered difficult jungle offenses Remove all exhibits. So we had the option of burning it down in the woods. Each month, we have between seven and nine patrols, as sometimes our strength is not enough. ”

Kuch Veng, a representative of Pursat Provincial Forestry Communities, said that for the last few years, the community has been less likely to patrol the forest than before. Family life became more difficult. And most people do not go to the forest to pick vegetables for sale because they are afraid of contracting the virus.

For forest crime, he said, there were still logging and transport along the river, with occasional patrol officials. When officers patrol the forest for a short time, but when the officer returns, the gang returns to action.

Kuch Veng says: 'We are not involved in forest patrols now because life is struggling and everyone is trying to earn money. To raise a family. Furthermore, as we work harder to protect the forest, some of them also face jail time because of the unhappy traders. Our mind is going to disrupt their logging and bring their accusations to court. So we don't want to go to court anymore. ”

Meanwhile, Anti-Economic Police of Siem Reap Provincial Police on March 22 cracked down on a truck illegally transporting wood At Thmor Andong village, Slor Kram commune, Siem Reap town, Siem Reap province, while transporting for sale in the provincial town. But the truck's owner and his accomplice had run away, leaving the crime car in place.

Meng Samnang, deputy chief of the Anti-Economic Crime Bureau of the Siem Reap Provincial Police, was quoted by the National Police as saying. Directly under the head of the Siem Reap Anti-Corruption Bureau and Mok Theara, Deputy Commissioner in charge of the Anti-Corruption Bureau The economy of the Commissariat Reap province in collaboration with the Forestry Administration of Siem Reap.

The truck was seized by the Siem Reap Provincial Police, waiting for the Forestry Administration to pick it up and save it, he said. Find a legal lumber owner. He stated that the truck was carrying 22 pieces of wood that were 1 x 2 cubic meters. Siem Reap authorities will continue to crack down on the crime in Siem Reap and to comply with the orders of the superiors.