The villagers protested to ask the court to release the accused 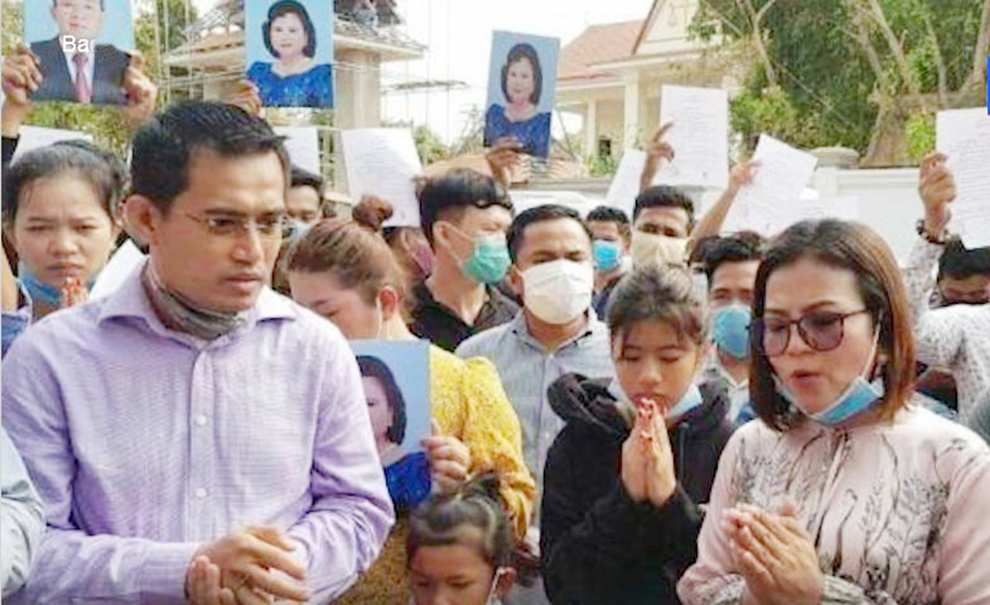 The villagers protested to ask the court to release the accused


Siamese More than 200 representatives of the crowd gathered in front of the Siem Reap Provincial Court last week demanding the release of the suspect. The chairman of an investment firm came out to be responsible for reparations to some 2,000 people who have invested in a company This is but denied by the court.

However, the request for the release came after a letter signed by Dum Suon Nath on March 15, 2020, claiming that he will pay back the full amount of the people's principal. In case he is free and out of custody.

Enarita CEO Dim Suh Nath has been in custody for eight months awaiting trial after authorities arrested him for fraud. And issuance of false checks.

Siem Reap Provincial Court spokesman Yin Sangng told the Post on Sunday that the requests by the people were not valid. The court also did not release Dum Nath on request, as the court is proceeding.

Once the court has completed the investigation, the court will hear the case and ask that all citizens await a settlement from the court while he is It is unclear when the case could be concluded and the decision to be heard.

“The court proceedings are still being heard and investigated because of his many cases and his collection is His rights have nothing to do with court proceedings. Through this protest, the prosecutor has already explained and explained to the protesters that the court procedure is being followed Each. "

Mr. Ngang claimed that the case, apart from being in court action, was also under the Interior Ministry's investigation, which is due to the fact that However, some of the victims have already filed a complaint with the Ministry of Interior, and the court is now investigating the property of Dum Nath. Being realistic first .

“But they have closed the investigation, they will hold a hearing and if this is not done it means that they are closed. Investigation proceedings are still underway. As for the amount and the complaint, I have yet to contend, but this case, the president of the first court and his prosecutor has collected and reported The leadership is gone.

Mr. Dim Suath Nath, 36, of Oknav Klaing Village, Sangkat Phnom Penh Thmey, Khan Sen Sok, is the CEO of Enarita Development Co. Ltd., with seven subsidiaries across the country. The country will invest in a wide range of fields including coffee, land, coffee, water and education. And Siem Reap and along the border The province has a Chief Marketing Officer.

Dum Nath was arrested and charged with two counts of fraud and forgery in July of Siem Reap Provincial Court. 2019 After complaints from several citizens sued the owners of the company for defrauding them of millions of dollars through venture capital Invest.

The Post could not locate the plaintiff who filed the case against the company on Sunday, while the court also refused to grant it. Related Resources

Ung Panha, a representative of about 200 people who were protesting for the release of Dim Suon Nath, told the Post on Sunday. The rally is to seek the intervention of Prime Minister Hun Sen to help thousands of families who have invested with Inari Available Dim Suh Nath is the company's CEO and is currently in detention at the Siem Reap provincial prison for eight months.

“People who have invested with thousands of companies are having a hard time with no bank The money pays private interest, and others are too afraid to go to their hometown for not having to face their creditors. All the people are eagerly awaiting and agreeing to accept the solution from Dum Nath, as promised in the letter. ”

One of the approximately 10 co-lawyers for Mr. Suon Nath, who declined to be named, said his client's continued detention Mr. Long's refusal to close such investigations has undermined the rights of the accused under the provision.

“His detention is very long and that affects my client's rights,” the lawyer said. Such prolonged detention has had a rewarding effect on my client. As a co-defense lawyer, the court is urging the court to speed up the process to make sure the victim is guilty The punishment is the same. ”