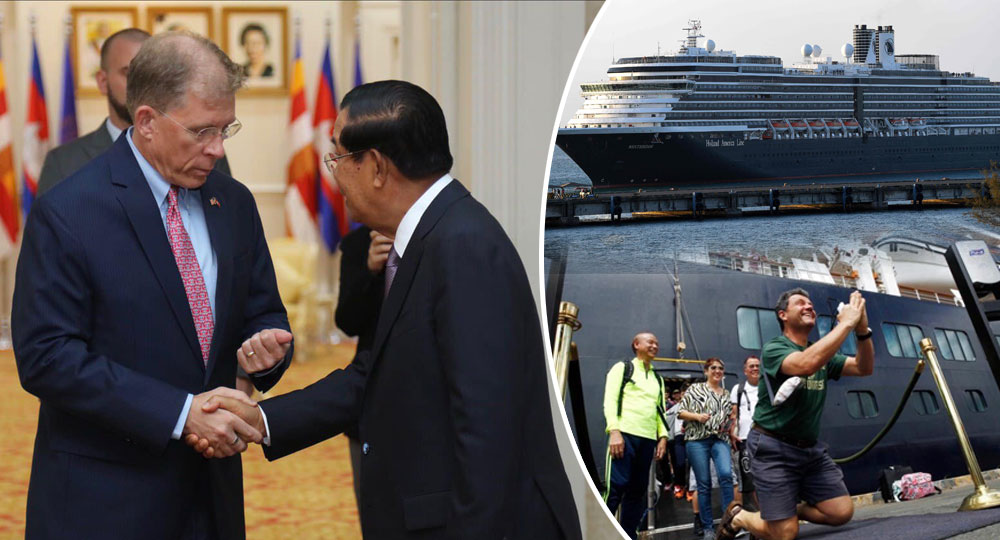 US Ambassador to Cambodia, Patrick Murphy, called the gesture of Samdech Techo Hun Sen, Prime Minister of the Kingdom of Cambodia, a true humanitarian for allowing US vessels to dock, while six countries and six islands are not allowed to dock.

He said the United States would continue to cooperate with Cambodia.

For Samdech Techo Hun Sen, that is what Cambodia does for humanitarian work, more specifically, what it does to avoid the so-called humanitarian crisis because if the Westerda is not allowed to dock At the port of Sihanoukville, it is unknown where the ship was docked.

Also, if something happened on the ship, the passengers would have a problem. Moreover, Samdech Techo Hun Sen also stated that Cambodia's gesture at this time, even though the Westerdam cruise ship was sick, Cambodia would still be docked in Cambodia, and it would be faster to dock. "The rescue of the patients on the cruise ship and the people of the ship are safe from those infected with Covid-19."

"Most of the passengers on the ship have left the country without any disease, except for one passenger who was passing through Malaysia, which the Malaysian government and the Malaysian Health Ministry have confirmed are ill," he said. Whatever the case, Cambodia is asking for a review. Because all travelers in Cambodia have tested positive for the Covid-19 virus, travelers arriving in Thailand, both the Thai government and the Thai Ministry of Health, confirm that the disease is not present.