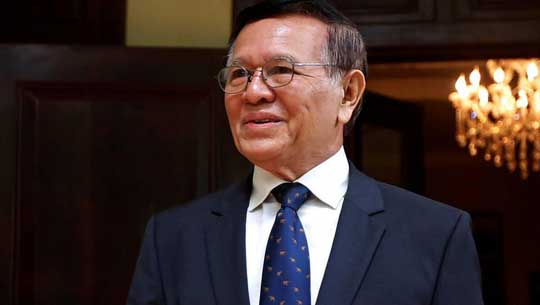 The United Nations human rights experts have voiced concern about the trial of a "treason" trial this week against Kem Sokha, with experts saying the entire process has since been completed. Charged until trial covered by irregularities.

According to a press release issued by the DMSH Media Center on January 17, 2020, UN experts say, "We have strong reasons to believe that the allegations of treason against Mr. Sokha were justified." Politics and allegations are also part of a larger pattern of misuse of law to target political opponents And government critics. ”

Mr. Sokha has been arrested, detained and charged with foreign conspiracy in connection with a speech he delivered in Australia in 2013, which was broadcast by the Cambodian Broadcasting Network (CBN). If convicted, Kem Sokha faces 15 to 30 years in prison.

Mr. Sokha was banned from traveling abroad and was banned from political activities. In an opinion released in 2018, the UN Task Force on Abuse Detention found that Mr. Sokha's pretrial detention was arbitrary.

UN experts have expressed deep concern over public statements by senior officials regarding Sokha's case that could undermine his right to a fair trial and possibly affect To the result of his trial. The lack of public participation in the courtroom, which is specifically allowed only for members of the diplomatic corps, may also raise questions about the merits of his trial.

Experts call on the authorities to ensure justice for Mr. Sokha immediately removes his restricted bail conditions, restores his political rights, and assures his right to recover compensation and other damages. ៕