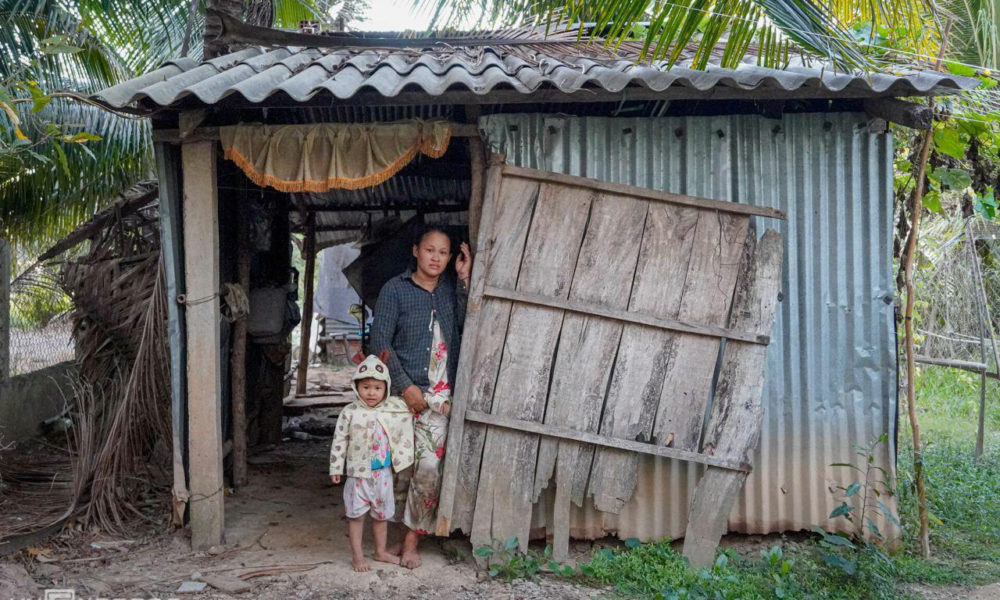 Dang Van Binh wakes up in a small hut near the river bank in An Phu Trong commune. The sky was still dark, only the sound of the frog crying. His two daughters, 12 and two and a half years, are still asleep.

Fearing the children woke up, Binh just stood by the bed, watched them for a moment, then sighed, leaving the hut. Binh's wife, Thach Thi Bo Pha, arranged for her husband to pack three old clothes in a backpack, a few fried fish, a few eggs, rice and 600,000 dong.

That's the bag of a 34-year-old man in real-life, 300km away during the dry season for the early morning hours in February. Binh has three siblings who grew up together, and he just dropped out of sixth grade. The three of them then moved to Ho Chi Minh City to find work. Thirteen years ago, while working as a laborer in Ho Chi Minh City, Binh met Bopha, a Cambodian from Bac Lieu province.

Bopha was three years older than Binh, his parents having died at a young age, living with his grandparents from childhood. At the age of 18, Pa's sister left the country and through an acquaintance came to Thailand to find work to relieve her family's hardships. The two have since lost their relationship. Sadly, he left home and met Binh.

The couple later married the traditional Pi Pea, and then moved to the river bank, borrowing a relative's temporary cottage made of wood and a zinc roof.

Five years ago, young couples were given land to be raised by biological parents. In the first year, the couple's inexperienced rice failed. In the second year (2016), the rice has just arrived and is expected to be in good condition and the West faces a historic drought.

Binh and his wife have no money at all for two years, plus a mortgage for almost 20 million dong. He and his wife had little money, and the factories around the area also had more workers because of poor harvests.

Binh and Pha were later introduced by acquaintances to a cashew nut factory in Thong Nhat commune (Boyd, Binh Phuoc). The couple sent their 8-year-old daughter to her grandparents for a look and then left.

For three months in the West, as they traveled, they avoided steep slopes, with each day trying to cross the water to cashew farms around the area to collect seeds for rent to their owners. With three months of savings, they saved 10 million dong and then returned to their homeland to pay off their debt, waiting for rain to irrigate the rice fields. Bopha told himself that her life was very difficult, so she wanted to stay in a place where she could earn a living and Binh thought that his exile would last.

In subsequent years, due to the salt water fields, the rice crop continued to be poor and low yield. Bin talks with his wife to stop growing rice and go watermelon. The first two crops, due to the soil being too low during the rainy season, were watermelon flooded. They just had a second daughter, which made their family life even harder.

For the past three months, Binh has continued to grow watermelon farms using various methods to prevent flooding. The watermelon field was green and the salt water was invading again, the first fruits were small and damaged. She was distraught over the 7 million dong she had lost, and one day she was gardening, with kidney stones, surgery and treatment costing over 10 million dong.

After four years of being hit by a "drought", Ben and his wife returned to their starting place.

Around the village of An Thon Hundreds of other families have also fallen into poverty, leaving their homeland temporarily in exile to find work to survive across the border.

The afternoon before departure, Binh had borrowed 1.7 million VND from his acquaintances. He gave his wife 700,000 dong. For another million VND, he bought medicine to treat headache and eye ache from a motor vehicle accident several years before receiving the first 400,000 dong.

Binh then accompanied the group of nearly 10 people to the 7-kilometer bus station. In the back of the car, Binh wiped his eyes and tried to look back at his wife and children until the small house was far away.