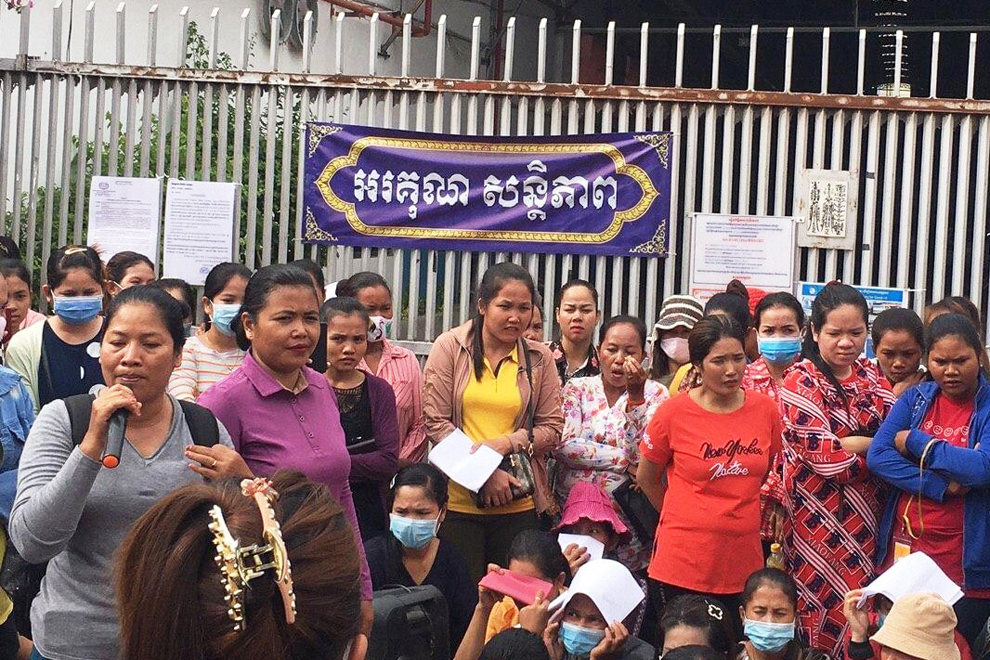 
Photograph: Pha Lina / Phnom Penh Post The Ministry of Labor has issued a letter warning the union to immediately stop the directing of workers at the White Oak Labor factory in Cambodia. Demand for factories that declare bankruptcy, pay wages and seniority, which the ministry calls illegal.

On July 1, hundreds of workers from the White Oak factory protested in front of the factory in Sen Sok district's O'Bekum commune. The way to demand that companies pay them seniority and other benefits as the company goes bankrupt.

A letter of warning sent to Yang Sophorn, president of the Cambodian Confederation of Unions, on July 1 of the Labor Ministry's labor dispute department, said. Based on her actions taken during July 1 at White Oak Met, it was illegal because the conduct was illegal. And those in charge of the union's administrative affairs have also expired.

“The union leader also led and incited the workers to threaten and put pressure on the employer side to gain access to them. "Payroll is contrary to the spirit of the law and regulations related to the labor sector."

Chhon Thearavong, director of the Labor Dispute Department, warned in the letter: “From the date of receiving this warning, please immediately stop the action. Violate the above rules. In the event that there is no modification or amendment to the warning letter, her professional organization may be sued to rescind or take other measures. As required by law, the restrictions.

However, Ms. Sophorn said that what she was seeing with the workers was because the workers suffered injustice. Encouraged or urged the workers to break any laws because what the workers did was only demanding the benefits that the factory had to offer. The workers are only legally allowed. "I still stand by the principle of supporting my members in the demands because the ministry issued me a warning But it hurt their advantage that they became so angry with me that I used a right to help my members They are suffering injustice. ”