The Minister of Public Works told the US Embassy that the situation in Cambodia was good, including the economy and transportation across the border 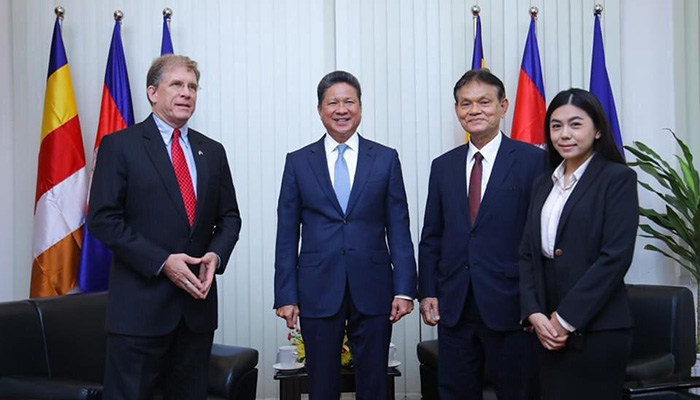 The Minister of Public Works told the US Embassy that the situation in Cambodia was good, including the economy and transportation across the border

In the presence of Patrick Murphy, US Ambassador to Cambodia Sun Chan Thol, Minister of Public Works and Transport, said the situation in Cambodia was good, including the economy, especially the smooth transit of cross-border transport with the country. Neighborhoods, despite the implementation of quarantine measures, are 14 days apart.

During his meeting with the US Ambassador to Cambodia on April 30, 2020 at the Ministry of Public Works, Sun Chanthol said: "The situation in Cambodia is good, including the economic situation, especially the smooth traffic of the country. Cross-border transportation with neighboring countries, even if appropriate measures are implemented In a separate 14-day foreign crew commander, entered the market and for cross-border transport by road with Vietnam to avoid the spread of the disease requires a change of truck drivers in the area.

At the same time, the Secretary of State also requested that the US ambassador in Cambodia consider supporting the Ministry of Transport, Transport and Infrastructure, and Railways, in particular, in building capacity for officials in the construction of roads. Providing training or exchange of study groups between Swap port Yacht, Sihanoukville and Port of Los Angeles.

In response, the US ambassador noted and considered for further cooperation between the two countries in these areas.

In addition, the US Embassy thanked the Royal Government of Cambodia for allowing the Westerdam ship to dock at the port of Sihanoukville and spoke about the general situation in Cambodia in preventing the spread of the Kov-19.

During the meeting, Patrick Murphy highlighted the 70th anniversary of diplomatic relations between Cambodia and the United States, each month of the year focusing on different topics such as April and May, the month for the environment and September will focus on trade and investment topics that will be visited by the ASEAN-US Business Council. Cambodia.

Sun Chan also appreciated the cooperation and bilateral relations between the two countries and expressed their delight and welcomed the cooperation with the United States regarding future projects in the field of public transport and transport.