The government has constructed 2,483 irrigation schemes for irrigating nearly 2 million hectares of land 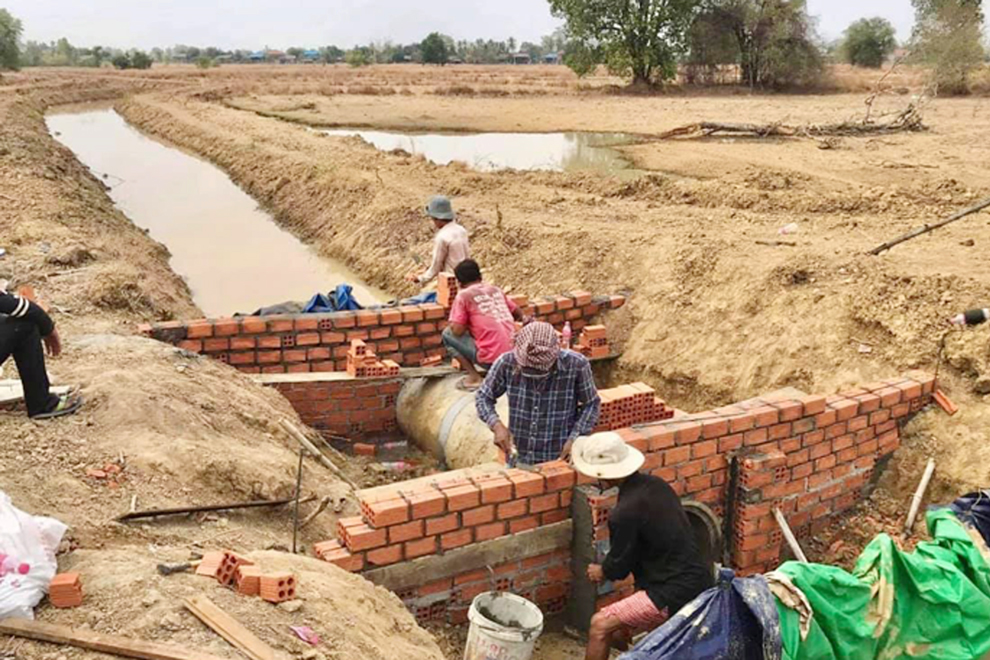 The government has constructed 2,483 irrigation schemes for irrigating nearly 2 million hectares of land


Photograph: Pha Lina / Phnom Penh Post The Ministry of Water Resources and Meteorology said yesterday that the government has constructed 2,483 irrigation infrastructure by the end of 2019 for Irrigated paddy fields on more than 1,835,422 hectares of the total cultivated area, nearly 3 million hectares.

Chan Yutha, spokesman for the Ministry of Water Resources and Meteorology, said at a press conference yesterday at the Council of Ministers. Irrigated water is mostly newly invaded and far from water sources.

According to Chan Yutha, the total irrigation system in the country is about 62% and there is still a lack of 38% this year. There are further measures to build irrigation at the border.

“The remaining 38% of irrigated capacity is not just in any province, but in almost every province because the region In some cases, for example, in Battambang, large amounts of irrigation infrastructure, and others, such as the Sek Souk Dam, the Poeung Poeong Basin, the Welsh Irrigation System, or some other system. But it has not yet responded to the whole of Battambang, as those who are close to the irrigation system can easily get it. But those who are far away from the system still face it. ”

For water supply, water supply from large reservoirs is used in areas where water is scarce, said Chan Yutha. Dealing with water shortages by diverting to areas where the soil condition is unfavorable or unable to divert water from the reservoir Water is the extraction of groundwater.

In addition, for the two unavailable areas, the Ministry of Water Resources and related ministries, he said There is also daily access to water for people to use, but there is no such shortage Country.

While the water shortage challenge for 2020 is predicted to be less severe, Chan Yutha said the ministry Water resources will continue to cooperate with friendly countries as well as development partners to further develop irrigation infrastructure at the border.

“The ministry has been developing irrigation on the border, in which the irrigation system on the eastern border is built. Already a large stretch in Svay Rieng province is also studying to restore and build another 78 Canal, the old canal to Draw water from the Bassac River Suppliers in Kampot province, along with Takeo.

The other part is the water source in Ratanakiri province, with water from the Omega, which has great potential to continue to be distributed in Kratie, he said. And Stung Treng and will continue to link to Svay Rieng and Prey Veng provinces, while on the Thai border, the ministry is continuing cooperation with the Korean side to work. Develop a unique project The drought and flood mitigation project in Banteay Meanchey province. He said the project will reach development soon after graduation.

Pat Sovann, agriculture officer at Gret, said the irrigation plan was a good plan to help the Cambodian people. Many are farmers, while their annual water shortage is a major obstacle for them.

“Having enough water is better for the farmers, especially in the dry season because the problems for the rainy season are not,” he said. It's okay for people to do normal farming. But part of the dry season crop is that we have a shortage of water and the lack of water will make them decide to migrate. ».

Mr. Sovann also said that the people themselves should contribute to the maintenance of the existing irrigation system and the new government-built irrigation system. For the sake of all, some people do not seem to be able to take care of them Destructive.