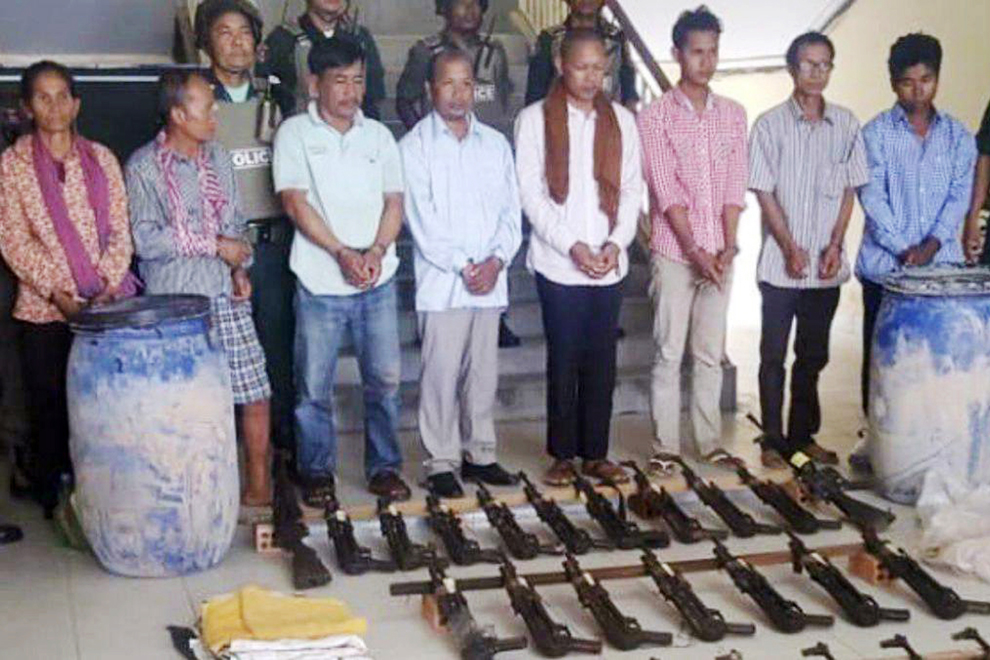 
Photograph: Pha Lina / Phnom Penh Post A group of 12 accused, including a woman, was brought to the Phnom Penh Municipal Court on March 3 for further trial Case Against Attempt to Assemble Armed Forces and Buy Guns to Overthrow the Royal Government of Cambodia in Phnom Penh, Kampot and Pursat 2018

In the courtroom on March 3, the presence of three judges was the presence of Judge Sylinna, the President of the Council. Trial and one prosecutor's representative. The 10 defendants were represented by defense lawyers for the 12 defendants. A March 3 hearing that followed last month, Peng Rara, one of the 12 defendants, told the judge he had the machinery. 1 land for rent or for hire. He lives in Techo elephant village, Techo commune, Chhuk district, Kampot province.

He added that Peng Sokha [another accused] owns two hectares of mangrove land in Chhouk district, which borders With his land, he always used his phone to charge in Peng Sokha's farm. Prior to his arrest, he learned that the cops found a pistol in Peng Sokha's farmland hidden in the farm That.

Judge Srinina asked 45-year-old Pengra if any of the 12 had known Mr. Peng Sokha. ?

Pengra told the judge that after the cops found the gun and arrested a worker named Peng Sokha. Fearing to arrest him, he fled to Kampong Cham and returned to Phnom Penh to stay in Peng Sokha for two days. Authorities arrested on 19 October 2018. He said he knew Peng Sokha because the name was his brother-in-law, but he did not know the other accused.

“But I'm not affiliated with the Cambodian government overthrow and I go to Kampong Cham because I go to Watch a sick mother and bring her baby to Phnom Penh, and I have never been to Thailand. ”

However, a judge told Pengra during the hearing that the court asked him to verify the answer His answer was to the police and to the court, where he was initially arrested. Because of his answers at the police and court, he said that he went to Kampong Cham because he was worried after. Know that the cops arrested Peng Sokha's workers.

"You can answer anything, but the court has the right to believe it or not," the judge said. .

Separately, Seang Van Doeun, another judge, was summoned by Judge Pengra to be involved in the armed group. He said, "I did not.

Due to the large number of defendants who were unable to cross-examine each other, the judge announced that the court would be delayed. Trial the case later.

The 12 were arrested by police of the Ministry of Interior's criminal department during a September 2018 arrest in Phnom Penh, Cambodia. Kampot, Pursat, and Kampong Cham provinces also saw 25 rifles, including some items.

Phnom Penh Municipal Court Judge Charges 12 Charges in Organizing Armed Groups and Unauthorized Arrangement According to articles 485, 486 and 488 of the Penal Code.