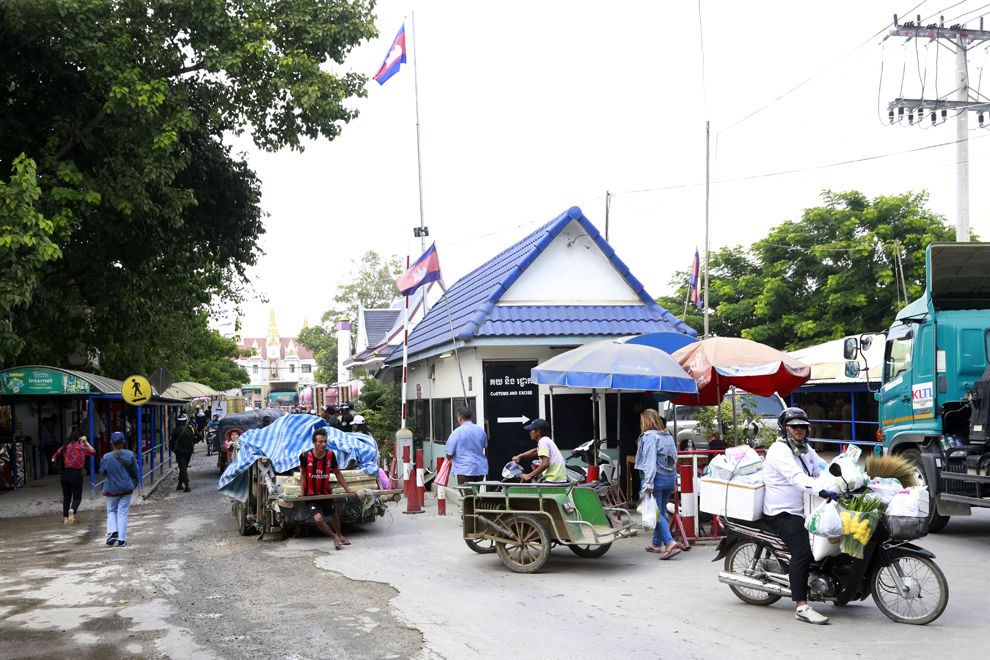 
Banteay Meanchey: Thai authorities have decided to suspend Cambodian traders from selling and transporting goods to and from Rong Klue market on the Cambodian-Thai border from January 10, 2021 Until further notice in order to prevent the spread of 19 Kovid disease outbreaks in This country.

According to a letter from Sa Kaeo provincial authorities sent to the Banteay Meanchey provincial governor on January 5, since the explosion A recurrence of 19 Kovid infections has been detected and has begun to spread widely in several areas. Sa Kaeo Province held a meeting on January 1 to consider implementing a number of measures with the Cambodian side. .

The letter states: "Cancel the measures that allow Cambodians to enter and leave the necessary transport of goods at Rong Klue Market. Aranyaprathet district, Sa Kaeo province, from January 10, 2021 onwards.

According to the announcement, Thailand has a high prevalence of 19 Kovid infections, a new wave in the country and has Many provinces, especially border provinces. The letter states that the Royal Government of Thailand will suspend the permission of Cambodians to transport and inspect goods in Rong Klue Market. Aranyaprathet, Sa Kaeo Province.

The letter continued: "For traders who are staying in the territory of Thailand and in Rong Klue Market, please continue to cooperate and implement the measures of The Royal Government of Thailand to participate in the prevention and control of the spread of Kovid 19 disease.

At the same time, Poipet City Administration decided to suspend the application for traders at Rong Klue Market to enter, transport and inspect Goods from January 8 onwards.

Regarding the announcement of the closure of Rong Klue Market, the Cambodian authorities, Mr. Ly Sary, Deputy Governor of Banteay Meanchey province, told the Post yesterday that the announcement The ban is due to the high prevalence of Kovid 19 in Thailand. Therefore, this ban is aimed at protecting the safety and health of the people of both countries.

"The health and life of the people is more important than the entry and exit of goods in this situation," he said. "The economy is important, but the lives of our people are just as important. If all the people die, the goods will not be able to go in and out."

"In the past, we had this favorable principle because the situation of Kovid 19 was relaxed, but Kovid erupted," he said. "So much so that their country has the right to close it, and their country has informed us correctly."

Mr. Touch Mony continued that the principle of crossing the border at this time is to require all cadets, even if they claim not to go anywhere. When entering the market.

He said that Thailand was suffering from a serious epidemic and that if Cambodia did not take preventive measures, it would suffer from the epidemic. Like them.

"Traders are not as difficult as workers who earn a day for a day, but workers can find a little temporary work," he said. Locally, because of local job opportunities, we still have.

On January 6, the leaders of Oddar Meanchey province also met to discuss the work and strengthen the friendship, solidarity and cooperation with the leaders of Surin province. Thailand at the O'Smach International Border Crossing.

Oddar Meanchey Deputy Governor Di Rado told the Post yesterday that the two sides had met in order to continue cooperating to prevent the spread. Of Kovid 19 cross-border by continuing to cooperate and facilitate the cross-border trade in goods and in accordance with proper technical standards Of the two countries, continue to work together to prevent illegal immigration of people, especially cross-border logging and car smuggling Law and continue to communicate and provide information to each other.

"According to the principles and guidelines of our government, all workers who come into the country must take samples," he said. Therefore, we asked the Thai side to help prevent and strengthen the workers from passing through the corridor, but they should be allowed to cross through the international corridor To check his health.

He added that more than 2,500 workers entered Oddar Meanchey province from December 20, 2020 until January 7 and arrived on time. This is just over 20 workers who have completed the work.