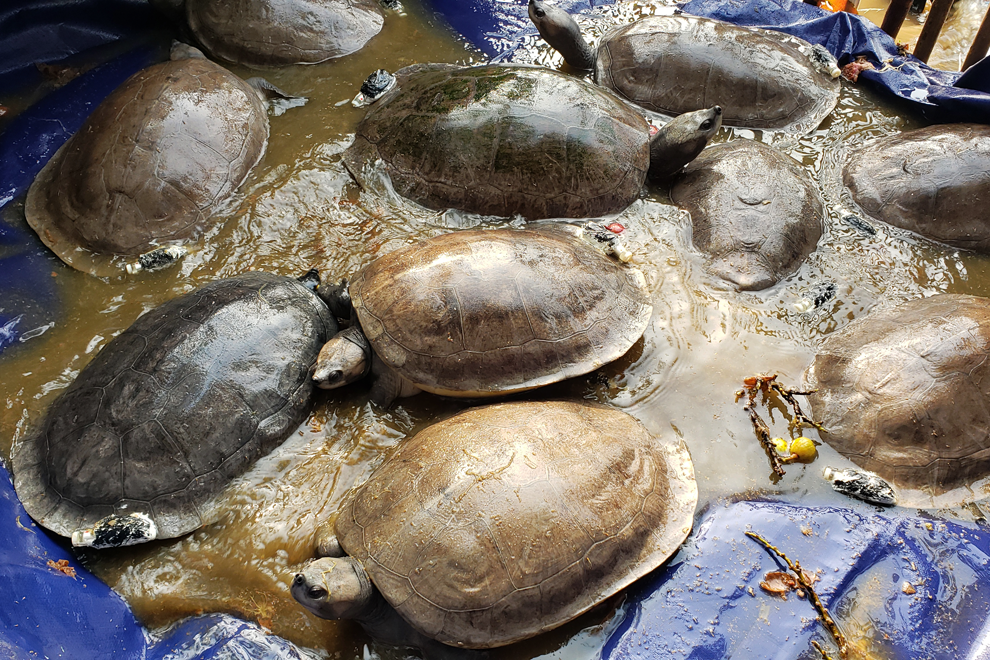 
Sihanoukville: Wildlife Conservation Society of Cambodia (WCS) and officials from the Ministry of Agriculture, Forestry and Fisheries in collaboration with Wildlife Reserves Singapore (WRS) on On January 28, 10 endangered royal turtles were released into Sre Ambel canal in Chamkar Luong commune. Kampong Seila district.

Ouk Vibol, director of the Ministry of Agriculture's Department of Fisheries Conservation, said yesterday that the release of the turtle was the result of nearly two decades of efforts. In protecting turtle nests, taking care of all baby turtles in the Koh Kong Reptile Conservation Center and protecting turtles in the community Dang Prek Sre Ambel, supported by WRS and some partners.

He said it was the fifth release of the royal turtle into the Prek Sre Ambel system after the first release in 2015. Second, 2017, third, 2019, fourth, 2020 and fifth, 2021, a total of 96 units . He urged stakeholders to continue the work of restoring the turtle species and reminded some individuals who continue to trade the species will be Punished before the law.

"I appreciate the involvement of local authorities, local communities, especially WCS, which has been rehabilitating endangered turtle species," he said. This is to be present in the natural waters in this area again.

Som Sitha, director of the WCS Royal Turtle Conservation Project, said the 10 turtles (scientifically known as Southern River Terrapin) had been released. This was collected by conservation groups after it hatched in its nests along the Sre Ambel and Prek Kampong Leu creeks in the province. Koh Kong and Sihanoukville between 2006 and 2015.

They are then sent to the Koh Kong Reptile Conservation Center to be raised and cared for before being released back into the wild.

"It is one of the 25 endangered species of freshwater and terrestrial turtles in the world," he said. Mr. It is listed on the IUCN Red List as the most endangered species and is considered a reptile representing Cambodia. Defined in the 2005 Royal Decree.

According to Mr. Som Sitha, due to illegal fishing, over-exploitation, loss of habitat and sand exploitation in the Prek Sre Ambel system in the province. Koh Kong and Sihanoukville affect the habitat and breeding of this species of turtle, which is found only in In the Prek Sre Ambel system, it is located in Koh Kong and Sihanoukville provinces only.

EU Ambassador to Cambodia Carmen Moreno says the EU has been funding wildlife conservation projects to combat illegal wildlife trafficking and Protect the nests of royal turtles and frog-headed tortoises through WCS as a project implementer in collaboration with the Fisheries Administration and local communities. "We support the Royal Government of Cambodia, local authorities and WCS for their joint efforts to protect and conserve turtles, and it reflects the importance of Protecting Cambodia's rich biodiversity. ”

Sonja Luz, director of Wildlife Reserves Singapore (WRS), said this was the result of a joint effort between the Fisheries Administration and stakeholders. Who worked together in order to save this species of turtle from extinction.

"It is a great encouragement for us to see this project achieve good results from 2015 until now," he said. So far, almost 100 royal turtles have been released back into the wild.