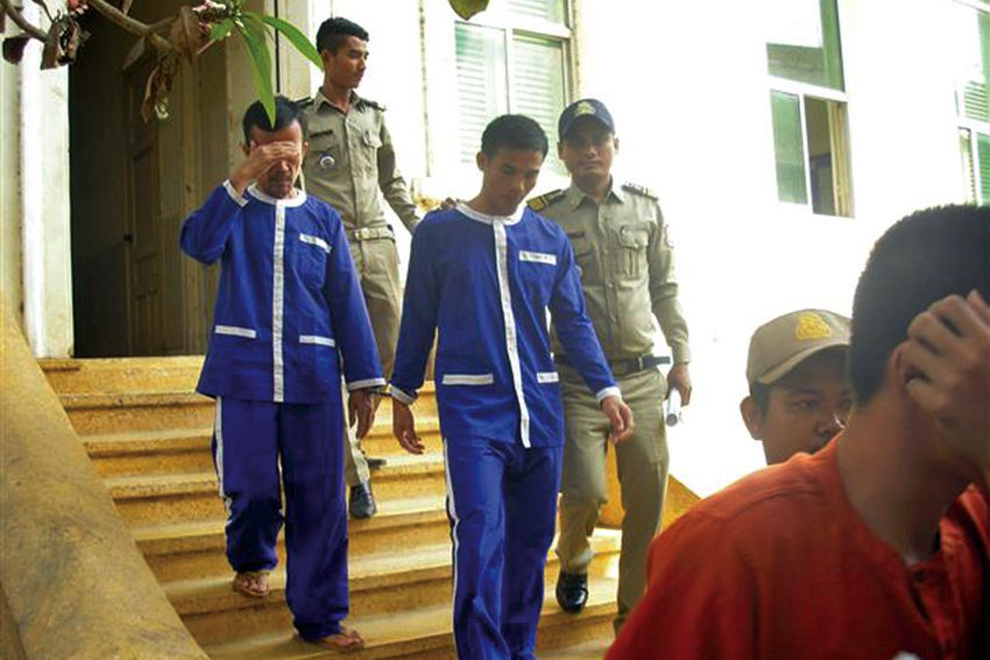 
Phnom Penh: The Supreme Court yesterday tried three armed robbers, one of whom died of 11 robberies. Each was sentenced by a lower court to 30 years in prison in Battambang province in 2011.

At around 10 pm on the same day, while the owner of the dog shop was preparing to close the door, the three men were wearing masks. Armed with an AK rifle and a K54 pistol, they stormed the victim's home. The robbers fired more than 10 shots, hitting Soem Chan, 24, and Koeun Theary, 31. Chhnang, the son of the owner of the house, died on the spot and Soeum Phally was seriously injured. The thieves took nearly 300,000 riel and 3 grams of platinum necklace and escaped.

After the activities of the accused escaped for more than 3 years, only in 2014 did the police arrest Phin Phorn in Battambang province and Nim Chet and her Sinath was arrested by the authorities in Phnom Penh.

After his arrest, Nim Chet confessed to the authorities that he and his accomplices had committed 11 robberies and killed three victims. Nine people were seriously injured in Banteay Meanchey, Pursat and Battambang provinces. The case was heard by the Battambang Provincial Court and the verdict was announced on February 17, 2015, each sentenced to 30 years for murder. Premeditated under Article 200 of the Penal Code, Phin Phorn is charged with conspiracy to commit murder.

In the courtroom yesterday, defendant Nim Chet told the judge that there were only two of them on the night of the incident. No, with another named Phin Phorn holding an AK rifle because he is a former soldier. As for Sinath, she did not participate in the robbery. Sinath, a friend of his who had just returned from working in Thailand, called to visit his rented room and was arrested. Body.

"I confessed from the appeal that I acted only with Phin Phorn, while Sinath did not. Joined. I asked the court to sentence me to 20 years, I also agreed.

As for Sinath, she told the judge that she did not participate in the robbery and killed the victim. She went to work as a worker in Thailand. He came to Phnom Penh and visited Nim Chet and was arrested by the police. "I want the court to release me."

Ouk Kimsith, a representative of the Attorney General, concluded that according to the records of the authorities, the defendants did act in accordance with the allegations of the Court of Appeal. "Therefore, I would like to uphold the judgment of appeal."

Chhe Vibol, a lawyer representing the two defendants, concluded that his client, Nim Chet, had committed the crime. But her client, Sinath, told the court he had not attended.

He said that the court should reduce the sentence of his client and Neang Sinath and ask the court to release him.

Following the trial, Trial Chamber President Khim Ponn said the verdict in the case would be announced on January 18.