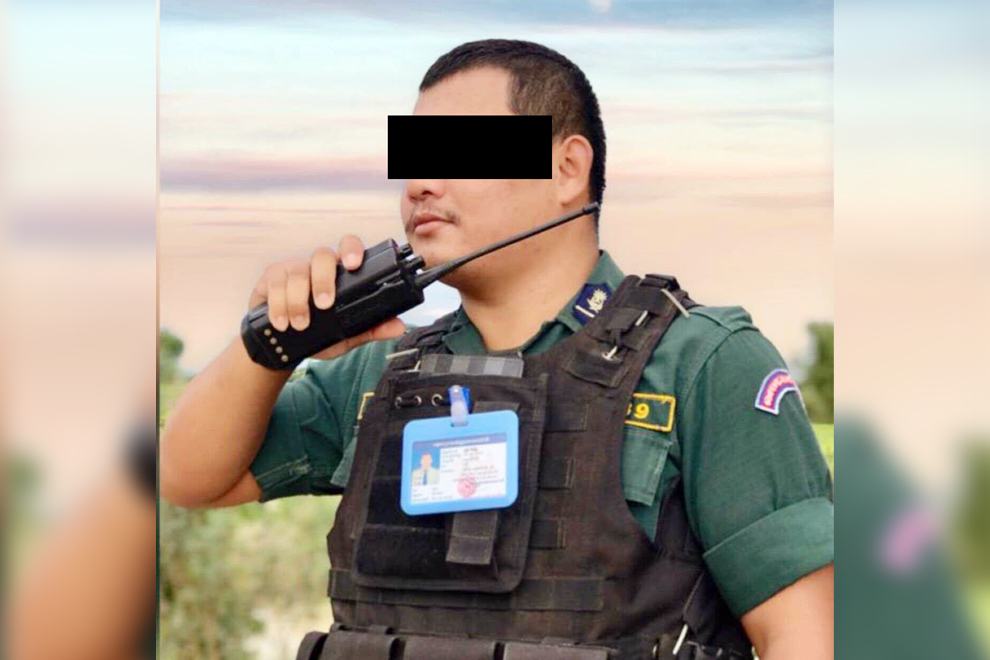 
Banteay Meanchey: The criminal police force of Banteay Meanchey Provincial Police on Monday afternoon sent a Sangkat Nimit police officer to court in connection with the case. A firearm exploded, seriously injuring a citizen on the night of August 28.

He said that in this case, the victim filed a complaint against the suspect, a police officer, for "intentional murder. Claiming that on the night of the incident, while riding a motorcycle back from playing online games on the Internet at a coffee shop in Nimit 3 village At home, the suspect, who was a police officer, shot him in the back with a handgun, injuring him. But the suspect refused.

He added that according to the suspect's answer, the explosion occurred on the night of the incident, which occurred during the operation and Crack down on drug trafficking and use suspects at Nimit 1 Village, Sangkat Nimit, Poipet City. At the same time, the victim's two motorcyclists arrived and called the victim to stop for questioning. Bring. During that time, there was a verbal dispute with the victim until there was a fight, then his gun was fired. The victim.

"However, at this time, the suspect has been sent to court by our specialized police force," he said. "

Around this case, the father of the victim, Mr. Nuon Vally, 49 years old, told the Post that on the night of the incident, his son did not cause hostility. What with the authorities is that his son saw the suspect stop a motorcycle and two people who are in the same village His son asked the suspects what was wrong with them. And the police officer replied that there was nothing wrong.

He said that at that time, his son also asked if they were okay, let them go back. Go home because it is night. Suddenly, Rithy Piseth, the deputy police chief of Sangkat Nimit, shouted, "Heng knows so much!" If Heng is strong, come down from the motorcycle! ”

He claimed that at that time, his son did not respond and rode a motorcycle home. But when the motorcycle was about 2 meters away from that place, Rithy Piseth jumped up and shot his son from behind.

"My son suffered a back injury and sucked on a bullet in his abdomen, but was operated on by a specialist," he said. The bullet is ready. However, the condition of the wound has not improved yet and is still being treated at Banteay Meanchey Provincial Hospital.

"After this case, the relatives of the perpetrator called my family to mediate compensation," he said. Some in return did not file a lawsuit, but my family did not agree.

Sum Chankea, coordinating officer of the human rights group Adhoc, said yesterday that although the two sides had mediated compensation Despite the extra-judicial lawsuit, the case still could not be finalized because it was a criminal offense.

"At the moment, we are monitoring the implementation of the procedures of the competent authorities in this case, because our Adhoc has Receive a complaint seeking legal intervention from the victim's family in filing a complaint against the suspect to court.

Teng Samay, a spokesman for the Banteay Meanchey Provincial Prosecutor's Office, said yesterday that the suspect, a police officer in the case, had been arrested. It has been handed over to the prosecutor's office and is being processed according to the law.