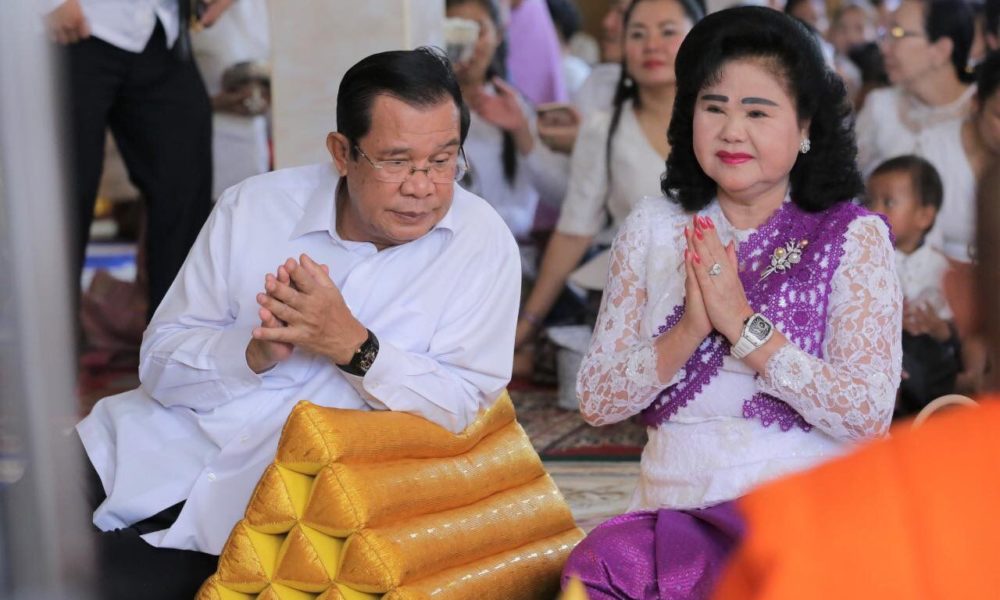 On Facebook on February 23, Samdech Techo wrote that it is worth remembering that after being unable to obtain permission from the brutal commanders to bury her dead and take care of his newborn wife, I was forced to Traveled with the commander to Prasat Khmom district of Tbong Khmum district (when they formed the district of Pung Ching) We rest and work there all night and one morning. In the afternoon we made our way back to the unit, passing through Memot District Hospital where my wife was staying.

On the way, I made every effort to ask the commander again to take care of my wife. But the same request also made me almost relinquish the ability to pull off an ammunition, but patience was necessary to ensure survival for a fight in which it had set up some secret networks. Come on.

At around 4 pm on November 11, 1976, when the motorcycle arrived at the hospital, I stopped the motorcycle without a permit because I was a rider. I walked to the room where my wife was resting to see Rani was swollen. As Rani was a midwife, he told me that there would be a placenta left over.

The two of us had nothing but tears to look at, tears of pity and regret for the dead child who had not cared for a new wife, but Rani seemed to be tougher than me to understand. From work I had to do, though I never told her.

I left in tears and did not even ask where my body was buried. On my return to the unit, I brought the matter to the political head of the organization, which he was a philanthropist. He allowed me to take Rani to a treatment unit located in Koh Thmor village, Tonleung commune, Memot district (when it was established as Trang district). On the morning of November 12, 1976, I tried to get to the hospital from the early hours of the morning to bring Rani to the unit. Fortunately for Rani, I brought her to the midwife to drop off the placenta in time, otherwise it would go on fire and die.

It was difficult then, but I took care of Rani personally. I care for and serve Rani as she cares for her old mother, not only with food, even clothes. I did exactly that as a husband. I became a Khmer medicine practitioner for my wife's health. Everything I had to do was by hand for about half a month. I always cry for a wife who is trying to follow her husband miserably, but I don't want to see Rani's tears so I don't bring him back or remind him of his dead baby or anything unhappy.

Although difficult, this was the first time I had lived with Rany more than a week after my marriage. By January 1977, Rani was pregnant again, which was wrong with my wishes as there should be no children in such circumstances. I was ready to fight the Pol Pot while my wife got pregnant. If the fight happened, what would happen to my wife and children? I want to live with my wife but I do not want to see my wife and children in danger when war breaks out. I asked the head of the unit to send Rani to the army hospital, located in Samrong village, Dar commune, Memot district, more than 30 kilometers from my unit.

Previous splits were split, but this time I was self-organizing to get ready to fight the Pol Pot genocide. I last met Rani on 18 June 1977, just two days before I left to lead a resistance movement against the Pol Pot. I made a clear decision, but I didn't tell Rani. Not to mention does not mean that I do not trust my wife, but the important thing is that I do not want to see my wife shed tears, do not want my wife to be attacked immediately for a thing that is not Has not happened yet.

Before leaving, I did not shed any tears for Rani. June 20, 1977 was the most difficult day for me, and the day I began to capitalize on the lives of the Cambodian people. At about 2 pm, after ordering the army to open a rice barn, I sat down to write a letter to Rani. The beginning of the letter was so difficult to find in words that I finally used the words "Come on, your poor wife, when you read this letter, you are so far away that you don't even know where you are." Anyways). The difficult thing is to tell Rani where I am! There was nothing clear in my life at the time. Write a letter and get shot? Or write a letter and fight? We want to go east but the situation forces us to come west. I wrote and cried and winked until I got a letter that took about two hours.

I would like to commemorate a phenomenon that occurred on the evening of June 20, 1977. It was about 4 pm after handing over some letters and supplies through my post, Noeun (now a Brigadier General of the Praetorian Command) to deliver to my wife. I also took a nap and waited for my other four friends. I woke up at 8 pm and was sitting on the burner burning a kerosene lamp when the lamp suddenly caught the sound of someone shouting from a tree with the crown on it, about 30 meters away from my house.

The old man's voice was loud (suddenly and out loud), several times, and loud, almost to the ear. After the screams of fire, the colorful lights wrapped around me, I shouted to those outside the house to come in. When three fighters came in, I asked them, "Who's shouting?" Did they see a fire in the house? All three of them said they had heard nothing. I nodded and thought to myself that my caretaker had told me to leave.

I have told you that twice, the great cypress that had been on the stump had appeared to me twice: the first time, in late 1975, I had a dream in which an old man brought me a new silk sack. Some people dream of having saris, if they have a wife) Not long ago I married Rani. The second time a fire came out of a grove across my roof, it lit up the house that night when Ronnie Nausea lost her baby in January 1977, the birth of this man.

The battle on June 20, 1977, was a battle with little hope of ever being met: Tens of thousands of tears flowed with unimaginable pain and tears. That helped to sharpen my spirits for the survival of the Cambodian people. (History of National Liberation, there are many documents and there is no need for me. Writing in the article regarding the meeting between me and my wife).

One thing I should remember is that about the middle of February 1979, I had a dream of my wife, Rani, on the other side of the creek with no water to walk to me. Suddenly, the alarm clock went up at 5 pm, waking me up. I woke up, I was crying and could not find the dream explanation that Rani was alive or dead.

The joy for the liberation of the people from the Pol Pot regime did not end in tears. If my wife died, where would she be? Died of disease or death by murder, and did my baby come before my wife died or die pregnant? If my baby is born, is it male or female, are they alive or dead? If my son were alive, where would he be? ”Many questions brought tears to my eyes.

In the evening of February 24, 1979, while I was working at the Ministry of Foreign Affairs on the river, the Minister of Health Nubeng informed me that my wife and children and my sister had come home. I do not believe at all, as this has happened twice. The first time, a woman about the age of my mother came to me and told me she was the wife of the foreign minister. He used me to call his husband to meet him. He was mistaken, for her husband had the same name as me. The second time at the Foreign Ministry, another woman also went to her husband. I met him, he called me nephew and asked to go to the minister. Then I told him I was a minister and he was very angry with me and shouted until I drove out of the ministry not knowing where he was going anymore. Because of the myth of having children and siblings, I didn't believe it. However, it was around 5 pm and I came home.

Excited to get out of the car, I immediately saw my wife, Ryan, and then my sister and a boy. Tears came to me and said, "This is our son. We tried to bless him. But he escaped to hug his mother and cry. My wife and family have been hiding in the rice fields. Honey, because the situation was so confusing that he didn't dare come out yet. My wife was informed that I was alive forever, but for the sake of happiness, she was willing to hide from another misery. The reunion between my wife and me ended in the widows and widows I was in. I am a widower and Rani is a widow.

Manet, my son, called me uncle for two months because he never had a father to call. When Manet agreed to call me a few days later, my wife and I had a repeat of my wife's miscarriage. . It was my fault for not moving the water to the jar. There was no running water in Phnom Penh at that time. We had to find a container to draw water on the Mekong River and store it in a jar below the house and to pick up a jar of corn or a bucket and pour it into a jar in the bathroom. I always do this work, but one day was too busy to get water, filled my wife's jar with water, filled the jar, and nearly two months old. My family's tragedy is just a small part of the people's grief throughout the country, which most families suffer from over and over again.