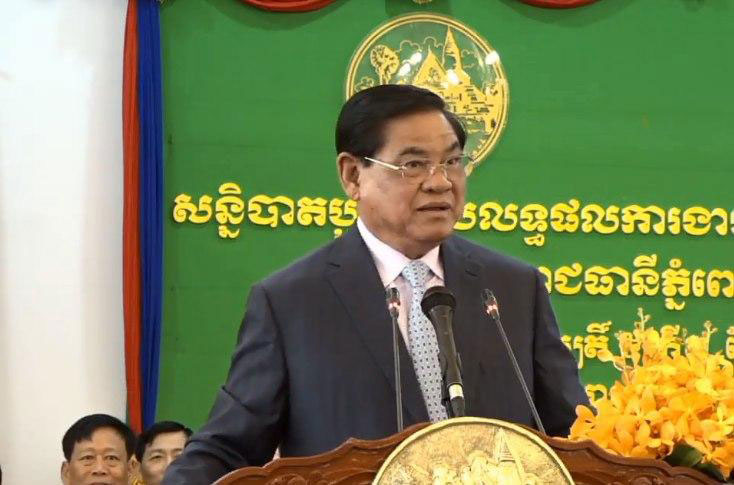 Phnom Penh: Samdech Krasa Kheng, Deputy Prime Minister, Minister of Interior, has ordered the President of the Capital and Provincial Unity Commission to step up local control of the situation and introduce measures to curb social insecurity and unrest. All images, in particular, must unite against absolute hostility The rebels and the revolutionary activities of the opposition.

At the closing ceremony of the Annual Meeting for 2019 and the working direction of the Capital Hall in the afternoon of February 27, 2020, Samdech Kheng said that the color revolution had already passed after the 2013 elections. By being patient and standing for pluralistic democratic democracy through peaceful and principled elections Report Democratic doctrine, legal advantage, as well as government policy preventing destruction of the revolutionary movement at that time, they could not overthrow the legitimate government emerged from the election.

"By 2020, the Capital and Provincial Uniformed Committees shall increase the management of local situations and introduce measures aimed at curbing the spread of social unrest, unrest and social unrest," he said. The rebel movement and the color revolution activities. "

"So, so far, those who are aiming to do this color revolution have not given up. And especially through the 9/11 plan, we know it all. And let's not forget, because this revolutionary activity of color is always exploiting our weaknesses. "

He said, "If they find a weakness, we have no excuse, no excuse, to mobilize the people or the forces involved in this color revolution, in that I suggest that all our administrations take care to solve it." The concerns, the proposals, as well as the conflicts that have arisen from childhood, do not prevent them from becoming a great excuse to make anti-royal moves. Government experience, countries in the region as well as in the universe, through color revolutions have used these issues.

In addition, Samdech Krom also advised officials that immediately resolve small disputes, fair and non-discrimination can be effective in preventing the manipulation of the legitimate government.

Taking the occasion, the Minister of Interior said that stakeholders should continue to mobilize people to participate in the implementation of safe village-commune policies on a regular basis in order to prevent and prevent crime in the area. Its basics such as robbery, robbery, drug offenses, illegal gambling, human trafficking, and so on Gang activity.

He added that efforts to improve the professional capacity of local police forces and improve communication between the police and police forces with the people by enhancing the effectiveness of providing Khmer identity card Family book, resident book and cover letter, as well as visits to help solve problems People are affected by natural disasters or accidents and when people face difficulties in their lives, especially the poor, vulnerable to encourage people to join the Village-Commune Policy movement.