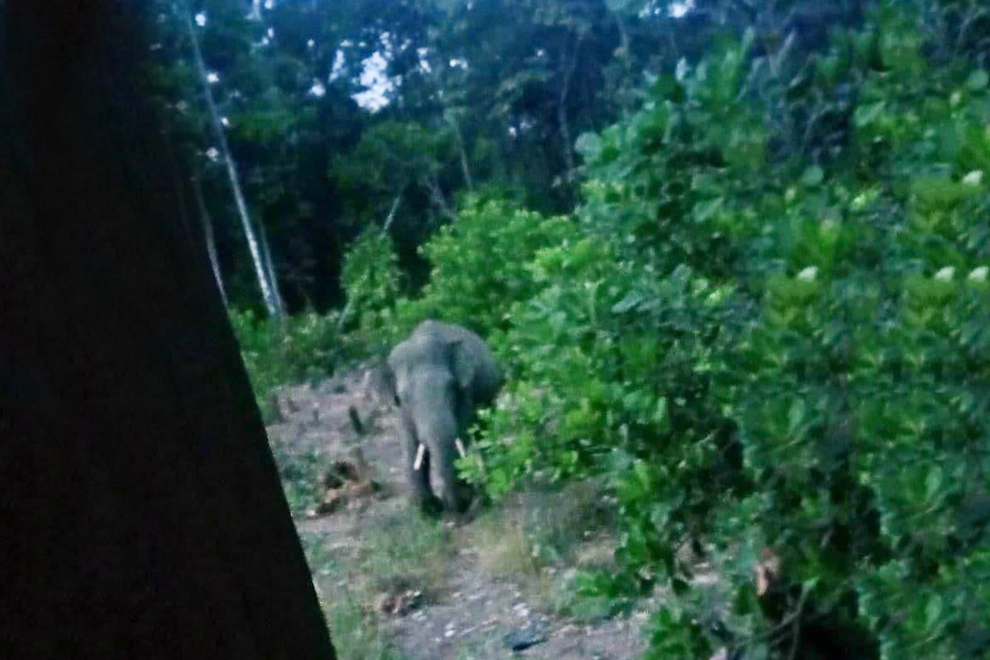 
Ratanakiri: O'Yadao District Unity Command and Ratanakkiri Provincial Department of Environment on January 4 jointly intervened and explained to Farmers in three communes on how to protect and banish wild elephants peacefully.

Sim Lin, deputy governor of O'Yadao district, told the Post on January 4 that two herds of 15 wild elephants had invaded crops. Destroyed 22 plantation huts of farmers in 3 communes, including Pak Nhay, Bor Kham and Yatong communes as of January 4 It's been 5 days.

"According to the farmers, these herds of elephants show up and attack their crops at night and when "During the day, they went down to the streams to hide in the forest."

According to Sim Lin, the farmers who owned the plantation were very angry with the herd of elephants, but they did not dare to fight them. No, for fear of breaking the law. On the other hand, among the herds of elephants, two ferocious males destroyed huts, plantations, equipment and some crops. .

In order to prevent the herd of elephants from invading and destroying crops on the afternoon of January 4, O'Yadao District Unity Command cooperated with professional officers The environment has disseminated the methods of expelling the elephants to the farmers in the three communes.

Phon Khemrin, director of the Ratanakkiri provincial environment department, said on January 4 that the location of the area where the herd had invaded was originally It is a habitat for wild elephants that live and pass through the seasons. The area is rich in vegetation, which is their food, and there are valleys and streams that allow them to drink and play in the water. And its biology. But now people are moving in and enjoying the creation of small villages, which are in conflict with the elephants.

"The method we are disseminating to the villagers now is a lesson in preventing and dismissing elephants peacefully," he said. How to prevent villagers from responding to the herd of elephants with violence that leads to danger to elephants become criminals. .

According to Mr. Khemrin, the method is to increase the surveillance force day and night and to hit or knock with a pot or a bucket or a bamboo pipe. Make a sound to drive the elephants away from encroaching on the fields.

Regarding this case, Mr. Sen Voeun, Police Chief of Yatung Post, said that at this time, the police force of the People's Defense Post and the park rangers cooperated to help the villagers in Surveillance and expulsion of the elephants from the fields or in the village and to allow them to cross to the other side of O Trang Large dense forest.

"We can not catch or shoot the herd, but we can not let them come and destroy," Voeun said. The crops in the fields of our farmers. "The method that the professional officials have introduced is very good."

Currently, Cambodia has about 400 to 600 Asian wild elephants living in the Mondulkiri, Ratanakkiri, Cardamom and Sanctuary protected forest areas. Other animals.