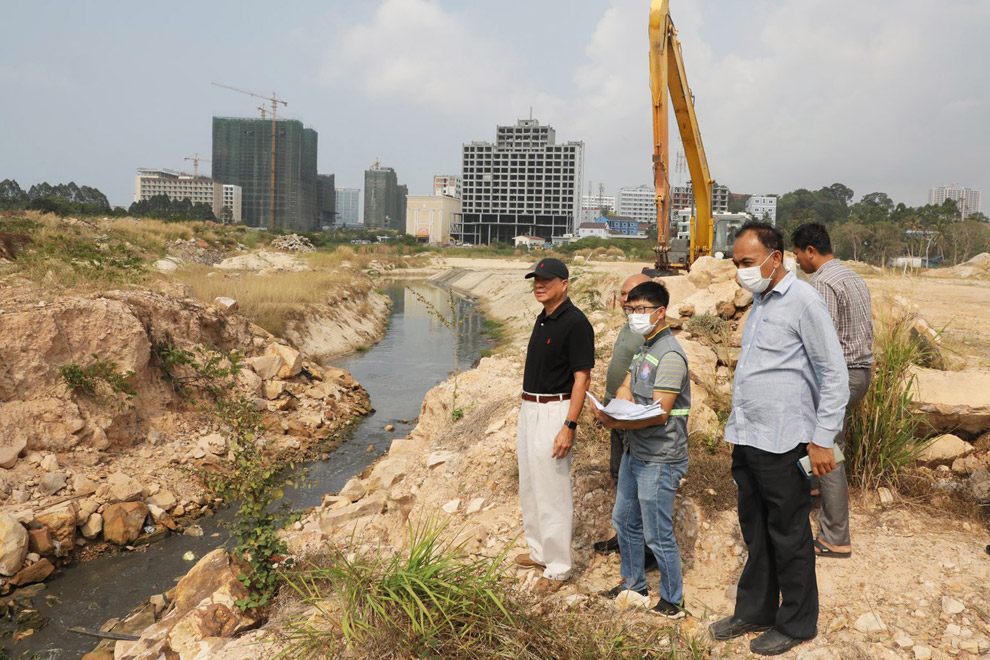 
Sihanouk:27-kilometer natural canal development and rehabilitation project in Sihanoukville that will enhance the beauty through Improve the speed of flood relief so far reached 93.42% so far. This is according to the report of the General Department of Wastewater Treatment System of the Ministry of Public Works and Transport on February 6.

During the visit to check the progress of the restoration of canals, sewage treatment systems and pumping stations in Sihanoukville from the 6th February The Minister of Public Works and Transport, Sun Chanthol, stated that the purpose of rehabilitating the main natural canals in the province was to Protect against flooding in vulnerable areas of the city. At the same time, the city will build a canal system to have a clean and hygienic environment that can attract visitors. The number of national and international tourists has also increased.

According to Mr. Sun Chanthol, the project to develop and restore natural canals was built by the General Department of Wastewater Treatment Systems and BUCG, including There are Boeung Prek, Emio pumping station, pumping station in front of the provincial hall and Sihanoukville wastewater treatment station.

When contacted for further clarification on 7 February, Mr. Heang Sothea Yuth, Spokesman and Director of the Information Technology Department And the ministry's public relations department did not respond. However, according to the report of the Ministry of Affairs, it has reached 93.42 percent, but did not specify when it will end.

Kheang Phearum, spokesman for the Preah Sihanouk provincial administration, said on February 7 that in Sihanoukville Flooding in some low-lying areas, affecting property and homes of living people In that area.

According to Mr. Phearum, the first cause of the flooding was that some canals were shallow and narrow. Others were built by people and fences on the canal land, which made the water flow impossible. Fast because some places are narrow.

Some of the sites are owned by the people, which used to be lowlands, which can help release a large amount of water. People are filling in the ground for the construction of various buildings due to the growth of development in the province. Another problem related to waste falling into canals is also a problem that makes the water flow is not smooth.

“When we rehabilitated the major canals in the province, we saw that the system The water flows fast. When there is moderate to heavy rain, we see that some of the floodplains are still submerged but not submerged for a long time. That's because the flow
The fast water also liberated the flooded area as fast as possible. ”He said the project to develop and restore natural canals in Preah Siha province. This started on December 9, 2020.

Sreng Vanly, Licadho coordinator in Sihanoukville, said that when it rained Extreme levels of flood danger were announced in at least two places, including streams and canals. Some people's houses are built on canals and streams, which is why water supply is not available. Fast.

"I think the rehabilitation of the canal is good, despite the impact," he said. Some people live on or feed on canals, but the provincial government also provides Give some land to those who do not have land to live on.

However, Mr. Vanly said that there are still some places that do not apply equally because they still see There were violations of streams and canals. For this work, the authorities should restore streams and canals in accordance with the plans and blueprints that Determined.