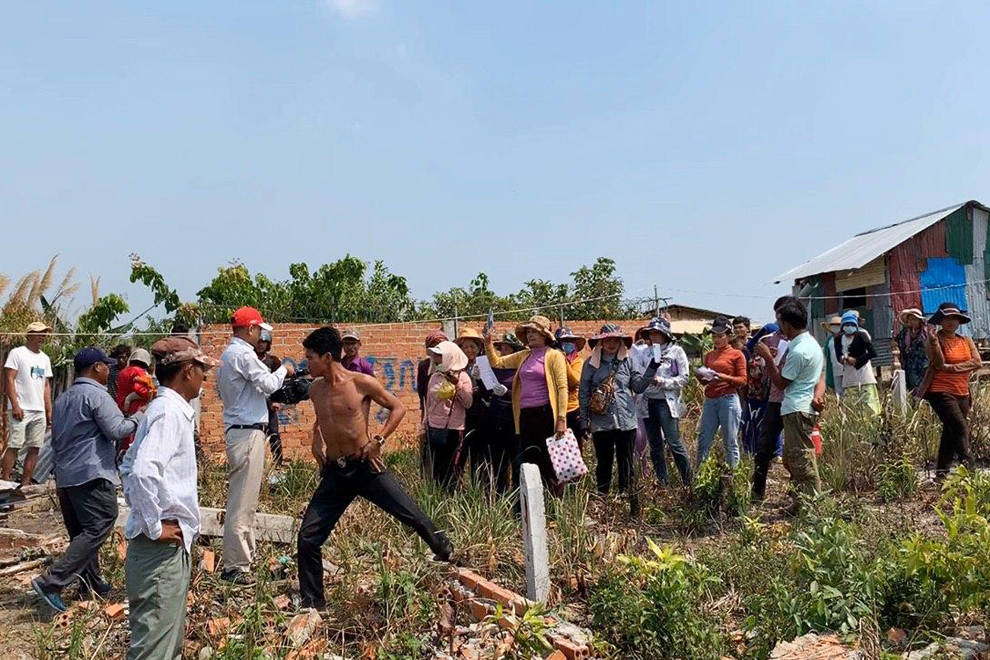 
Sihanouk 50 families claiming to own 5 hectares of land in Korki village, Bat Trang commune, Prey Nop district, Preah Sihanouk province Yesterday, on the site, a letter was submitted to the provincial governor Kuoch Chamroeun claiming that the person, Ouk Sinnet and his accomplices, had violated Take their land with lice The clearing house and gardens at night.

Keo Chantha, a representative of the 50 families, told the Post yesterday that while protesting on the site, residents demanded Ouk Sinnet and his allies came to settle the dispute. But no one came forward to solve the problem for the people, and then asked for intervention from provincial governor Kouch Chamroeun to help with that. .

“They are not coming out to solve the problem, they are using the people they rented to stay on our land,” she said Come back with us. Now there are clashes, push-ups, push-ups, and some threatening to cut us off. If we clash then it can be very dangerous in this morning's protest [Monday morning]. ”

Chantha said that all 50 families submitted a letter of request for intervention to Mr. Kouch Chamroeun in Sihanoukville province on February 16. There was no intervention by the provincial authorities as of Monday.

On request to help the people request Kuoch Chamroeun to help them return to their land. They confirmed that they, 50 families, had been living on the land since 2002.

By request for the same intervention: “In the first week of February, 2020, Mr. Oukneath's and his associates carried the machinery. Clearing the land at night and during the day, removing machinery to confuse people and damage crops and homes. Fifty houses and formed a guard The defense position 5 hectares of land in all directions to check out others.

They state in the intervening application: “We would like to request the intervention of His Excellency the Governor of Preah Sihanouk province to seek justice. Let us all go and live in the crops as before. All the children are suffering, and now powerful people are clearing out 50 houses and houses. So, Your Excellency, the Governor be pleased to help the 50 families with justice. ”

Kheang Phearum, spokesman for the Preah Sihanouk Provincial Government, said yesterday that a letter had not yet been received from the families of 50 families. This is yet. But he said he would look for the application to arrive. Prey Nop district governor Sar July, however, could not be reached for comment yesterday.

Sok Chan Dara, the village chief of Kiri Kei district, confirmed yesterday that the land in the disputed area is mostly forested land in Preah Sihanouk province Fifty families have not yet submitted an intervention to the village.

“They are citizens who do not have data on the commune list yet. They do not know from any province or from any province. They have taken land from 2017-2018 till now, some people have built houses in the area. No action from the top.

The Post has not yet been able to find a source to contact Oukhennet and others involved in the allegations. Yesterday