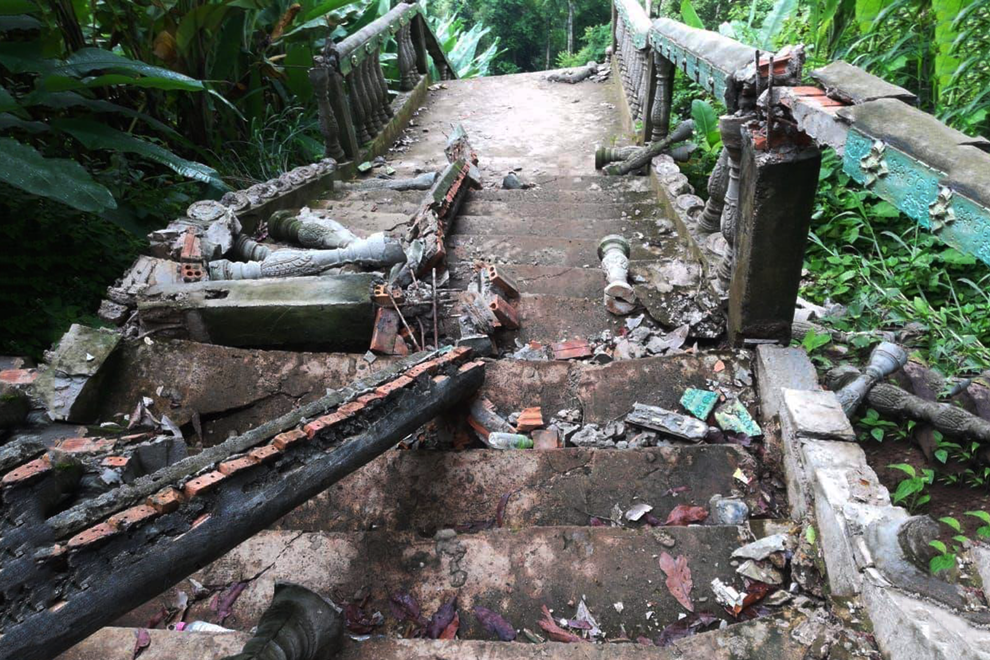 
Preah Vihear: More than 200 stairs to Tbeng Meanchey mountain in Kraing Dong village, Preah Khleang commune, Tbeng Meanchey district, Preah Vihear province, which were damaged by floods Rain last rainy season is being repaired by provincial authorities at a cost of more than $ 140,000.

Sam Leang Try, director of the Preah Vihear Provincial Department of Public Works and Transport, who received the construction, said yesterday that the total number of stairs to Tbeng Meanchey 1,800 beams, of which 203 were damaged by floods during the previous rainy season. This damage makes it very difficult for tourists and locals to climb the mountain.

He added that the Preah Vihear provincial administration, through the provincial Department of Public Works and Transport, has begun reconstruction made of steel and plans to spend more than 14 million dollars. Ten thousand dollars. There are still some materials to be used, such as orders from China.

According to Mr. Leang Try, to facilitate the travel of people and tourists to climb the mountain easily and avoid any accidents. Mr. Prak Sovann, Governor of Preah Vihear Province, led the team to inspect the site. He suggested setting up temporary detours to facilitate travel.

Preah Vihear provincial governor Prak Sovann yesterday declined to comment on the project, referring questions to the provincial director of administration. You answer.

Preah Vihear Provincial Administrative Director Yong Kimheng said yesterday that Phnom Tbeng Meanchey is a natural tourist attraction on the top of the mountain, which is attractive because The top of Tbeng mountain has 3 stone pagodas, Wat Dambok Khmao, Krabao Chrum, waterfalls, as well as many other areas that are related to Lokta Ministry of Sachchum Phnom Tbeng, the great power of ancient Khmer.

"We saw the difficulties of the people and tourists who visited this mountain, so we hurried to fix it," he said. What to do to get ready before our Khmer New Year. "These $ 140,000 is not the state budget, we mobilize from philanthropists to build this project."

According to a report by the Ministry of Environment, Phnom Tbeng Meanchey was declared a natural heritage site by the Cambodian government at the request of the Ministry of Environment. September 2016, covering more than 25,000 hectares of natural land. Phnom Tbeng Meanchey area is more than 400 meters high, there are 1,800 steps with beautiful natural beauty, there are 3 waterfalls Falling Tang Yu or Chak Angre, caves, bats, mountains, Tbeng and 3 stone shrines as well.