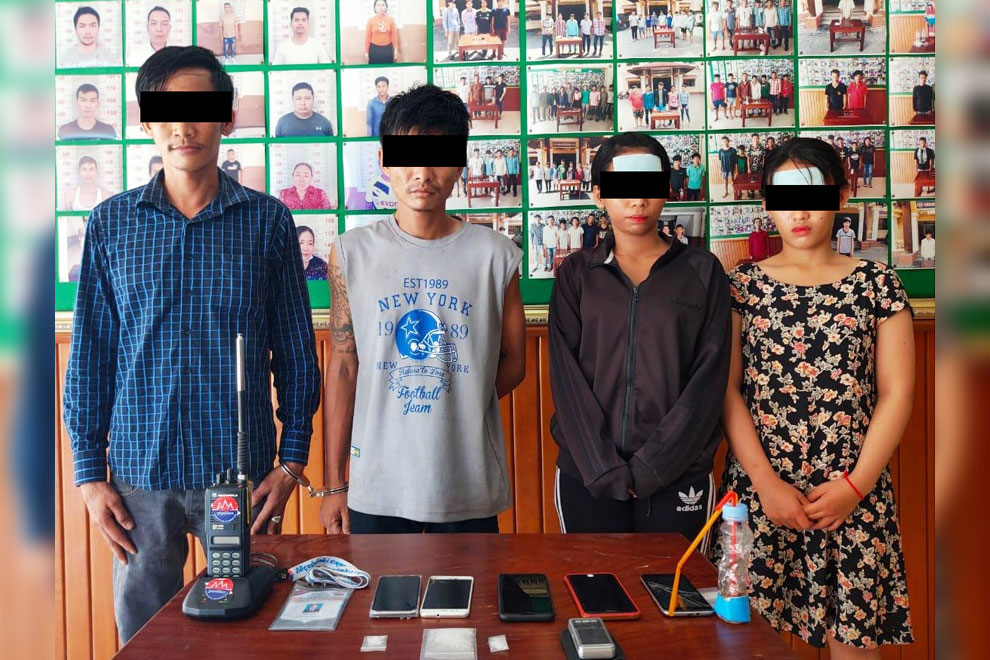 Anti-Drug Bureau of Phnom Penh Municipal Police at 12:30 AM on September 23, 2020 Collaborated with the Chamkar Mon district police force to arrest a Chinese man by confiscating several kilograms of drug exhibits.

Phnom Penh Municipal Police spokesman San Sok Seiha told the Post yesterday that a Chinese man named Ly Meng Sinh had been arrested. Arrested in front of a hotel near the Hang Bridge in Tonle Bassac, Chamkarmon district after a search found a suspicious object 14 pieces of drugs.

"Before arresting the Chinese man, our specialized police force found white gram powder suspected to be a drug," he said. A large bag weighing about 5 kg near a black Lexus GS 300 with license plate Phnom Penh 2W-7669.

On suspicion, authorities spied there, then saw the Chinese man arrive with a large suitcase. 1. When they saw this, the police arrested them and searched the suitcase and found 14 more suspected drugs.

According to Mr. Sok Seiha, at this time, the competent authorities are bringing the suspected drugs to the experiment to find out the truth, while the male suspect The Chinese man is being questioned by officials.

However, a source from the local police officer involved in the operation told the Post on condition of anonymity that the drugs Probably a "heroin" type.

In Siem Reap, the suspect, Yen Soya, 36, was the publisher of Her Menu News and lived in Kork Dong village, Teuk Vil commune. Siem Reap City and three other male and female accomplices, including 29-year-old So Visal, a car mechanic, 18-year-old Chea Srey Pich, a businessman, and Un Srey Pich. The 22-year-old was arrested on the evening of September 21, 2020 at an apartment in Siem Reap's Toek Vil commune. The four were sent by the Siem Reap Provincial Gendarmerie to the Siem Reap Provincial Court yesterday.

Theav Chandara, director of the Anti-Drug Office of the Siem Reap Provincial Gendarmerie, said yesterday: “They were arrested for specific crimes. "They are using and packing drugs into small bags for trafficking."

Prior to the arrest of the four suspects, specialized police forces monitored their activities for more than a year. Months ago. During the operation that day, the police confiscated 3 packs of 9.02 grams of methamphetamine, 5 mobile phones, and a radio. Contact 1, 1 drug scale, and some drug paraphernalia.

After their arrest, the police tested their urine and found that it contained drugs.

"So far, they have refused to cooperate in providing information about the source of the drugs they have purchased," he said. And resell. "However, on Wednesday afternoon, our professional officers decided to send them to court for further legal action."

On Wednesday, the Post contacted the Hero Menu newspaper for comment on the case, but received several calls but no one answered.

Regarding this case, Mr. Nop Vy, Executive Director of the Coalition of Cambodian Journalists, said that Mr. Yen Soya's actions may affect your dignity. The press and the owner of this newspaper unit.

"Journalists play an important role in promoting the betterment of both socio-economic development and the rule of law," he said. Yen Soya's actions are completely contrary to the code of professional journalism. In this case, I would like to support and encourage the authorities and urge the court to punish this person according to the law.