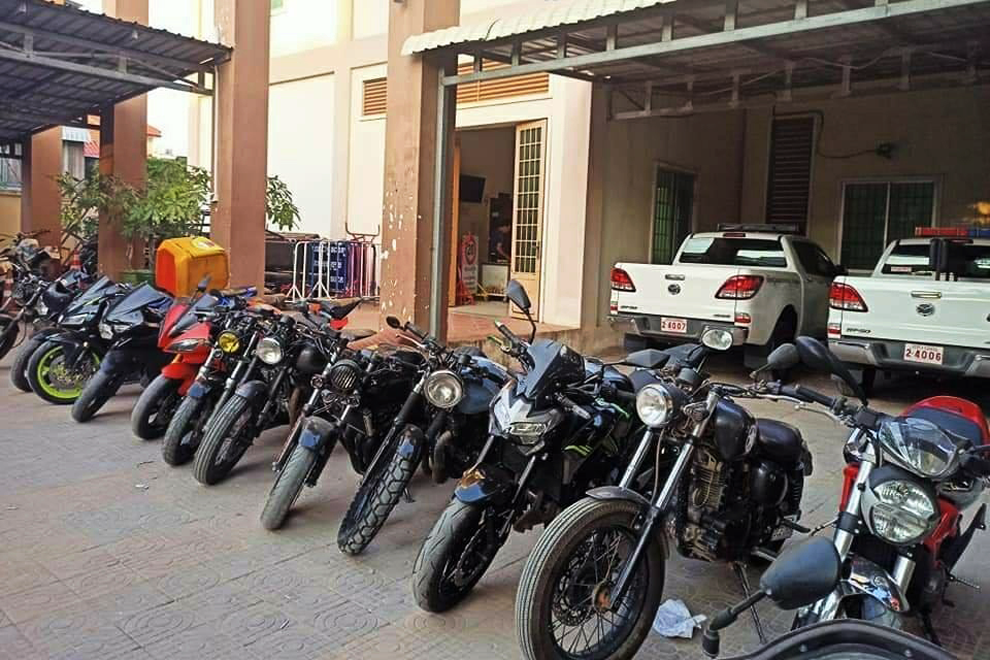 The order came after Phnom Penh police seized a motorcycle equipped with a cement pipe, causing a number of loud noises. 60 vehicles disturbed the people and public order.

Sar Thet said on January 11 that police forces in all 14 districts had been suspended from seizing motorbikes with cement pipes. Heard a lot of people temporarily. He stated that the suspension is waiting to receive a new order from Mr. Neth Savoeun, National Police Commissioner General to avoid any animosity with the people because some motorcycles do not Recycled.

He said: "In all districts, stop to stop big motorbikes, motorbikes with cement, no nests, loud noises, first stop To wait for the new regulations … because some big motorbikes have a hive of cement to drive, no noise, so this type does not exist Wrong. ”

Mr. Khuong Sreng, Governor of Phnom Penh, in the meeting of Phnom Penh Unity Command on the morning of January 11, urged all 14 districts to keep Provide security and public order to the people in Phnom Penh and must prevent noise.

He confirmed that the Capital authorities as well as the competent forces arrested and detained 60 motorcycles related to the big motorcycles that caused Noise as well as motorbikes that process cement disturb the people. He urged the relevant departments, especially the Department of Public Works and Transport and the Department of Environment of Phnom Penh to go directly to the location where the motorcycle was stopped. They are to be inspected for technical characteristics and environmental impact before being returned to the motorcycle owner. However, he confirmed that the motorcycle with the wrong speakers is still kept waiting for instructions from the Ministry of Interior.

Meanwhile, the Battambang Provincial Police also stopped the users of motorcycles equipped with recycled cement pipes, making loud noises to disturb the night. In Battambang city, there were 8 units on the night of January 10, 2020.

Major General Sat Kimsan, Commissioner of Battambang Provincial Police, said that after confiscating the eight motorcycles, they found that These motorcycles, in addition to modifying the cement pipe to make loud noises, are still inaccurate on other points, contrary to the law on Road traffic.

Mr. Kim San assigned the task to the Road Traffic Police to carry out by educating motorcycle owners to stop committing such activities and Required to change the motorcycle cement properly and fine according to the violation of the law on road traffic before returning the motorcycle to its owner .

Chhay Kim Khoeun, deputy commissioner of the National Police and spokesman, said on January 11 that so far no summary data had been collected. As a result of the ban on motorcycles equipped with recycled cement pipes, there will be no noise all over the country as the Ministry is preparing to make instructions . He added: "Currently, the inter-ministerial is preparing to document the instructions, but the upper level has not yet decided whether to put it as a regulation or instructions or something. No, when out, we know … ".

Kim Panha, director of the Asian Injury Prevention Foundation in Cambodia, supported the move. But he also asked the authorities to check in advance because some imported motorcycles already have loud noises from their factories. Mr. Panha suggested that the authorities should also consider the implementation after receiving any regulations or instructions from the management with the publication At least a week or two in advance so that the people know and implement so that there is no discrimination from the people.

On January 8, 2020, Deputy Prime Minister and Minister of Interior Sar Kheng ordered the police force and the Ministry of Public Works and Transport to inspect and identify Big motorbikes that make noise to the people.

Mr. Sar Kheng found that there were some cases of gangsters riding big motorbikes, processing the cement pipes in the wrong way and of loud noises. Disturbance to the people, especially he himself has also been disturbed by the sound of the cement pipe.

Pursuant to the Sub-Decree on the Amendment of Sub-Decree No. 44 dated March 21, 2017 on Transitional Penalties for Violations of the Road Traffic Law It is stated in the new Article 6 that a fine of 100,000 Riels shall be imposed on the driver who makes a loud noise or a lot of smoke. Technical standards.