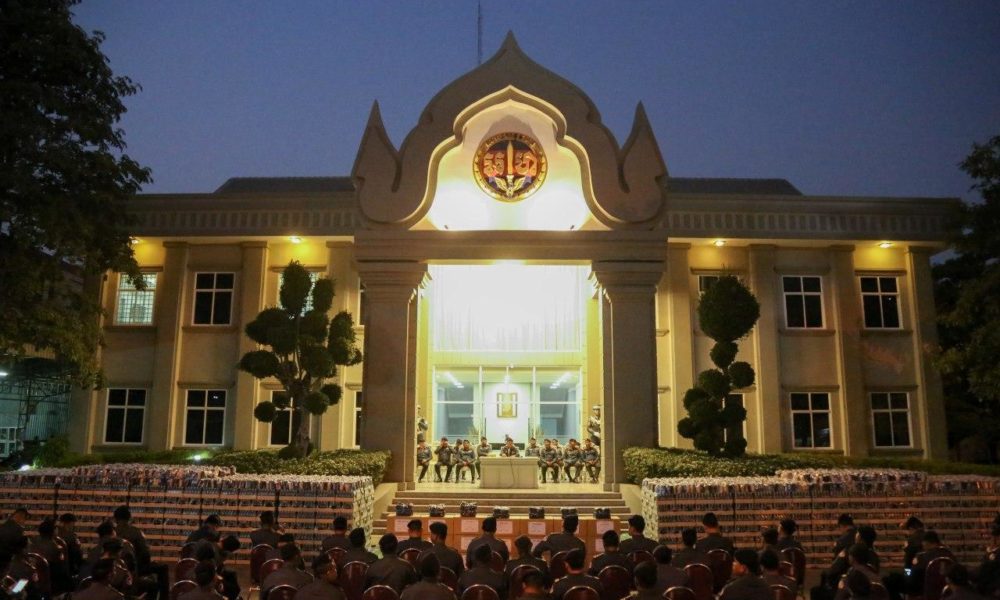 With the permission of General Sao Sokha, Deputy Commander-in-Chief of the Royal Cambodian Armed Forces and Commander-in-Chief of the Royal Gendarmerie, and after taking the time to organize a gathering and give gifts to the armed forces throughout the city each. Get 1 bottle of orange juice, 1 T-shirt and 1 pack of Pure Energy Drink By 2020, on the evening of 03, 2020, Lieutenant General Rath Sreng, Deputy Commander of the Royal Gendarmerie and Commander-in-Chief of the Royal Gendarmerie of Phnom Penh, gathered forces under the capital throughout the capital to celebrate the celebration. New Year's Eve, just before the actual holiday, comes to encourage the officers, deputy officers and soldiers of the regiment Capital police a chance to celebrate the New Year in advance and leave time to care for security and public order to the citizens in the actual holiday is coming in the near future.

At the same time, the Royal Gendarmerie of Phnom Penh also took the opportunity to invite His Excellency Oknha, Oknha, Lok Chumteav, Lok Chumteav, Ladies and Gentlemen, businessmen, businessmen, national and international guests who have always supported the activities of the Royal Gendarmerie so far. There will also be a group of artists and celebrities performing and singing A private cremation.

In a welcoming speech to the President and guests of the event, Lieutenant General Rath Sreng said that the Phnom Penh Armed Forces Meetings which have been ongoing to this day have been held six times and the program was held because But Cambodia was fully peaceful under the win-win policy that ended the entire war in Cambodia on the 29th December 1998.

On behalf of the army officers, deputy commanders and the entire staff of the Royal Gendarmerie, and in the name of Lieutenant General Rath Sreng himself unanimously said, "Thank you peace! And the deepest appreciation of the winning political founder is Samdech Akka Moha Sena Padei Techo HUN SEN, Prime Minister of the Kingdom of Cambodia ”, and Lieutenant General Roth Sreng expressed his warmth and warmth for the high presence of the Prime Minister. Guests who have taken the opportunity to attend the event are also welcome Ke deep thanks and wish Presided guests, happiness, progress, good health, happiness and family longevity, age 4. It is Vann::: Nobility.