People's Letter: "Fall leaves are not far from the base! 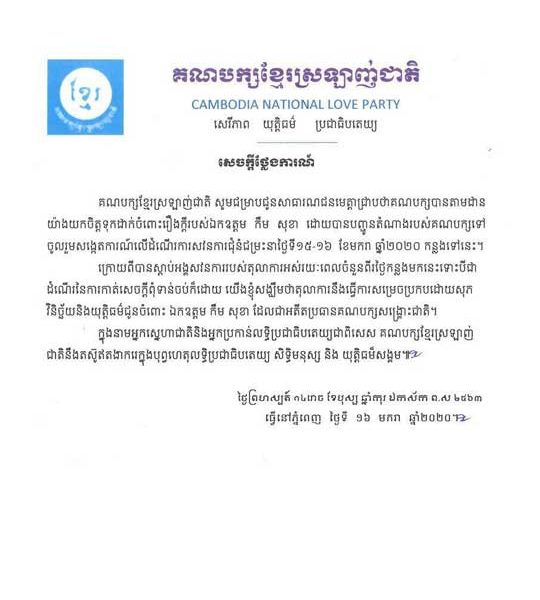 People's Letter: "Fall leaves are not far from the base!

Former Opposition Party, Separate From Opposition CNRP Seeks Ministry of Interior to Create New Opposition and Has Not Received Legal Reconciliation All directions, areas. Therefore, it can be called a 'malnourished' party.

This is truly a fall not far from the base! . Unlike former dissidents who dissolve, the opposition is not afraid to violate the country's laws, and when legal action is taken by the authorities, they will cry out: Speech, etc.
It should be reminded that on January 6, 2020, the Ministry of Interior had just given the green light to allow some former leaders of the former opposition party to regain their political rights, to form a new party, the "Patriotic Khmer Party". But the Ministry of Interior has required party representatives to file for registration in accordance with the Law on the Commission Politicians must first act.

As a law student, I understand that this is not only a bad example for people living in a country that wants a national law, but it is wrong that the law should not be. Be forgiving.
As a law student, I see the former CNRP being right
The court also abolished the former opposition leader and former officials, many of whom have done so in breach or defiance of the law in the past, but so far, those former opposition officials have gained the rule of law. Political re-enactment still stands, acts violated and is contrary to the law. Perhaps this action is characteristic of the opposition, as the old adage says: "The leaves are not far from the base or the lid." That is why the court has just begun the case. The party has also issued a statement seeking justice for Kem Sokha.

I remember that the composition of the leaders of the “Khmer Patriotic Party” was all former CNRP officials and former lawmakers who had favored Kem Sokha, such as Bio Factor, Sim Sovannny, Kang Kim Hak and more. Etc. Therefore, even though the new party scheduled to form has yet to gain legitimacy, the group is against the law, daring to issue abusive statements to protect and support Kem Sokha. So I would say that the former opposition party that created the new party was a good-looking figurine, but in fact was a party that violated the law very much in line with the one that the court had obviously abolished.

As a reflection, the people can evaluate that the "Khmer Patriotic Party" has claimed and positioned itself as the new opposition in Cambodia, a law-abiding party that can find true justice and democracy for the people! But when it does not have the legal right to do so
That action is not violating the law violently through its statement, how can the people trust and support?
However, the country has to have a family law and there must be discipline. All parties
Politics shall operate in accordance with the Law on Political Parties. Civilization requires that every cell in the society, including the legal person, must remain under the law in order to become a society with the rule of law. As I was a law student at the Royal University of Law and Economics and saw the wrong actions of “Khmer Patriotic” party officials who had no right to act politically, it was advisable to break such laws. Very disappointed and hope that the new party will not continue its activities by taking the law for granted. That. Fourth-year law students at the Royal University of Law and Economics (RULE)