One in two drug traffickers is asking for a release 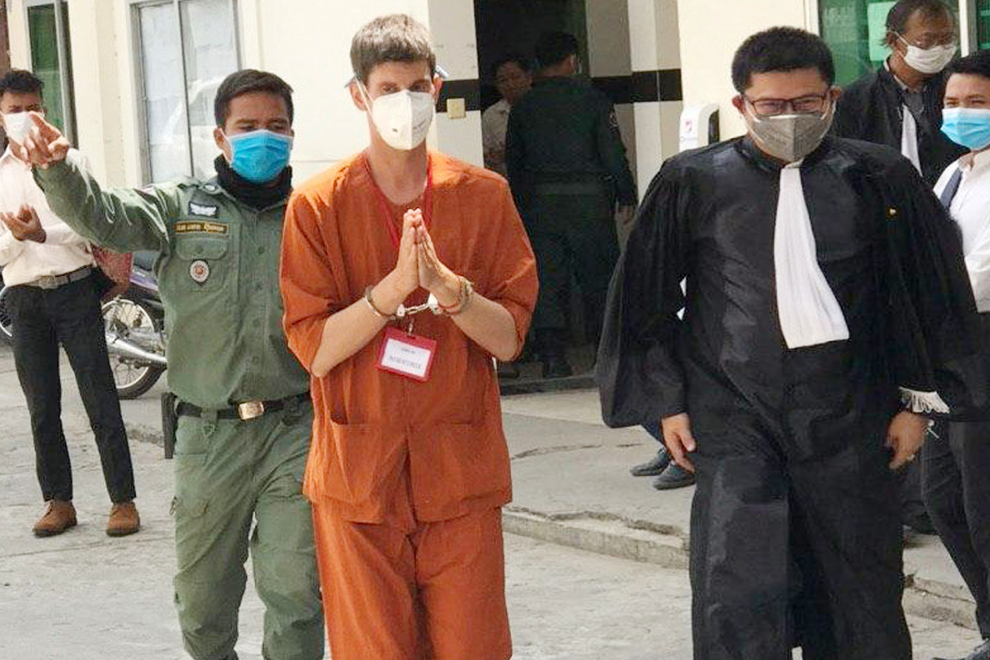 One in two drug traffickers is asking for a release


Photograph: Pha Lina / Phnom Penh Post Belgian drug dealer who appealed to the Court of Appeal asked for his release yesterday Unrelated to the allegation, while another colleague accused of trafficking more than 1,300 grams of cocaine together last year 2018 did not appeal despite the lower court order He was sentenced to life in prison for life.

Court documents show that the Belgian man, TANGUY E-DDIE. 33-year-old J. TALLER has been in Cambodia since 2012. In 2017, he briefly went to Belgium, and he returned because of his wife's birth.

Only during February 2018 did he know a Belgian man, CATRY DAVID NOEL, who was a mobile burger seller. Cars in Phnom Penh. After knowing him for a while, he borrowed his girlfriend's CATRY DAVIDNOEL but forgot the amount and did not repay the woman.

On January 6, 2018 CATRY DAVID NOEL flew from Brazil to Bangkok, Thailand. Then, on January 10, 2018, CATRY DAVID NOEL flew to Cambodia, but was competent at the international airport gate. Phnom Penh found in man's luggage contained two large packages of white gram powder in the bottom of a suitcase and competent He was arrested after finding drugs. Anti-narcotics authorities showed the result of the seizure as 1,300.24 grams of cocaine.

After the arrest, CATRY DAVIDNOEL told the cops that the drug, which he had found, had received a luggage from the man. One Brazilian sent to TANGUY EDDIE .J. TALLER, and the name hired him for $ 30,000 upon arrival in Cambodia. But not even receiving the money, the cops arrested. One year later, Mr. TANGUY EDDIE .J. TALLER was arrested at the Bavet-Cambodia border in Svay Rieng province.

The case was heard by the Phnom Penh Municipal Court on 19 December 2018 in absentia TANGUY EDDIE .J. TALLER will announce a verdict on June 22, 2018, sentenced to two life imprisonment and fines. Each one earns 80 million riels into the state budget.

Both have been charged with trafficking and transporting illegal drugs under Article 40 of the Drug Control Act Issue an order for the arrest of TANGUY EDDIE .J. TALLER.

In the courtroom of the Court of Appeal yesterday, defendant TANGUY EDDIE .J. TALLER told the judge that he only knew the name CATRY DAVID NOEL and had been friends with the Belgian people and that he was not involved. No drugs.

Mr. TANGUY EDDIE .J. TALLER told the judge through a translator: "I did not rent the CATRY DAVID NOEL drug and after 10 months of verdict The authorities arrested me, but I was not aware. I request the court to release me. ”

Tan Senena Rong, the prosecutor's representative, concluded that, in fact, CATRY DAVID NOEL's answer was that TANGUY EDDIE .J. TALLER is a renter. But this seems complicated because the defendant TALLER denies, and CATRY DAVID NOEL does not appeal to the Court of Appeal. It means that if he does not appeal, he may admit that he did.

“I hold a lot of big drug cases like this and have never seen the cops get arrested,” Narong told the hearing. Back but only caught the renters. "But this is the first time that people have been caught in the back."

“I do not believe the accused is TANGUY EDDiE .J. "TALLER is involved. I represent the prosecutor and let the jury consider you clean in this matter."

Lawyers for one of the two defendants concluded that in fact his client was named CATRY DAVID NOEL, but he did not. Not involved in drugs. His client was not even aware of the arrest warrant. Because if he did, then he went to his country and will not wait until ten months after his arrest. No.

“I would like to appeal to the Court of Appeal and release my client,” he told the judge.

After the trial, the trial judge, Judge Seng Sivutha, said the verdict would be announced on April 6.