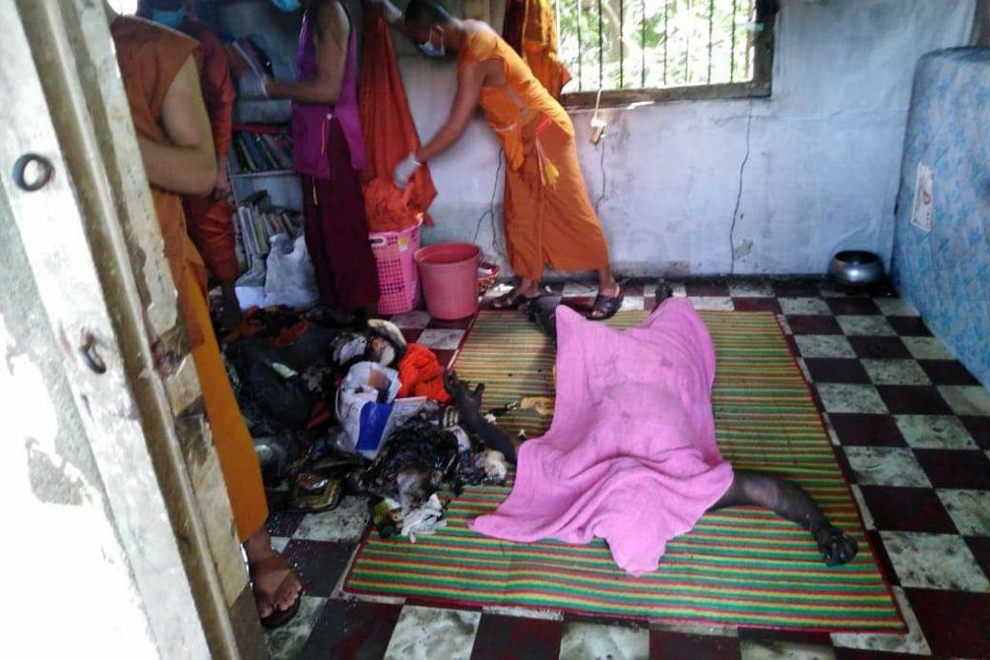 
Battambang: A monk at Wat Kandal in Romchek 4 village, Rattanak commune, Battambang city, committed suicide by setting himself on fire at 11:30 a.m., Sept. 21, by police officers suspected to be caused by the monk having a mental crisis is not It has nothing to do with anything else.

Battambang City Inspector Chhang Van Chhay said yesterday: “We have researched the case and found that he did. He actually committed suicide. ” Mr. Van Chhay urged to ask the technical officer of the Battambang Provincial Police who participated in the suicide case.

He said: "Please ask the provincial technical office to clarify because I am the mayor, so my answer is limited, but The provincial specialization is stronger than the city, however, the conclusion is that.

The director of the Battambang Provincial Technical and Forensic Office, Cheam Champouroth, told the Post yesterday that the monk's suicide was based on facts. That this monk died by committing suicide by burning himself.

He said: "We look at the facts to see that the stove connected to the wire under the bed by the boiler. Electricity, and not just boiling water over time, heats up, causing the paper and biodegradable fire to build up. The victim tied his body to a bed (and set it on fire).

According to Mr. Champouroth, who asked for information from a monk in Siem Reap who is the brother of the victim monk, said that before the Pchum The victim monk always complained about the hardship of not wanting to live anymore, told his brother over the phone and I Educated and advised you not to be upset, especially not to think short, only to commit suicide.

According to the report of the Battambang Provincial Police, the monk committed suicide in the second floor of the second floor. Hat Hak, 21, is from Balang commune, Prasat Bakong district, Siem Reap province, but he went to Kong Kan Ben at Wat Kandal, thinking of his time. It has been five months since the suicide.

According to the chief abbot of Kandal pagoda, Keo Sampong, who went to the scene, he saw a lot of smoke at the time of the incident. He left the victim's room and went up to open the door, but the room was locked and he saw that. They shouted to each other to help clear the door to put out the fire. "I and another student named Heng Hin Wa, when I saw the smoke coming out of the room, the room was set. The key from inside, I screamed for help to put out the fire. We opened the door and saw that the whole room was covered with fire. While the fire was burning, I heard the chanting of Buddha Sarnam Kochchami. We took water to put out the fire and he died at 12:15, the ego called the authorities. Check.