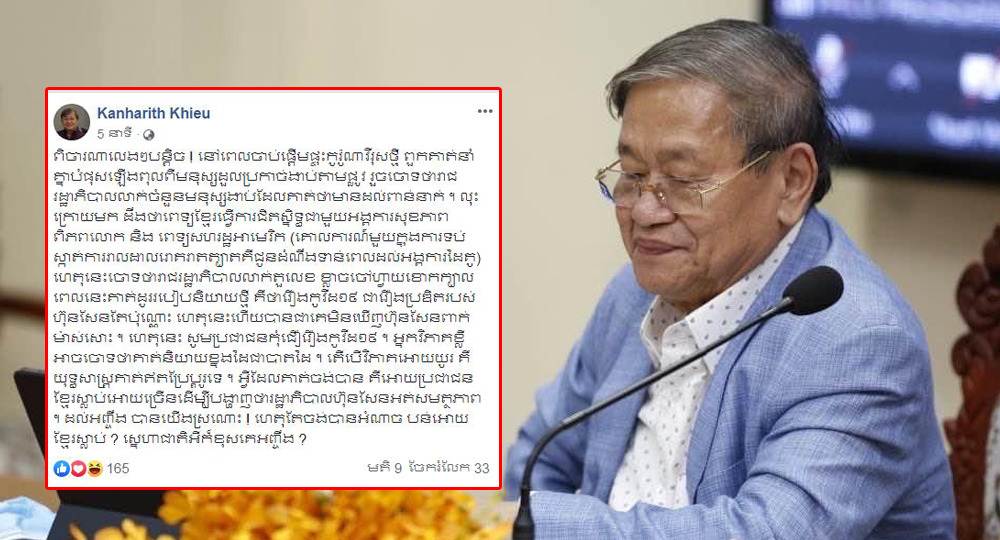 Phnom Penh: Observing the stirring information of a handful of people over the Khmer-Kovar-19 epidemic in Cambodia, Minister of Information Khieu Kanharith has expressed his doubts about the opposition's desire for power to bring the Khmer people to death! Is patriotism different?

"Just a little bit of fun," he wrote on Facebook on April 23, 2020. At the start of the new coronavirus outbreak, they raised poison from people who had died from seizures and accused the government of hiding the number of people he claimed were thousands. It was later learned that Khmer Doctors worked closely with the World Health Organization and the United States (one of the principles to prevent the spread of the epidemic was to notify partners in time), thus accusing the government of hiding the fear of head lice. So he changed his way of saying that Kov 19 is only Hun Sen's fiction, so he didn't see Hun Sen Hamas money. Therefore, please do not believe the Kiv 19 "

The minister emphasized that “The short analyst might accuse him of saying the back of his hand in the palm of his hand. Does the long-term analysis remain unchanged? What he wants is to kill more Cambodians to show that the Hun Sen government is incompetent. How we long for it! Why want Khmer death powers? What's patriotic? What's wrong with that? ”

Having been a taro