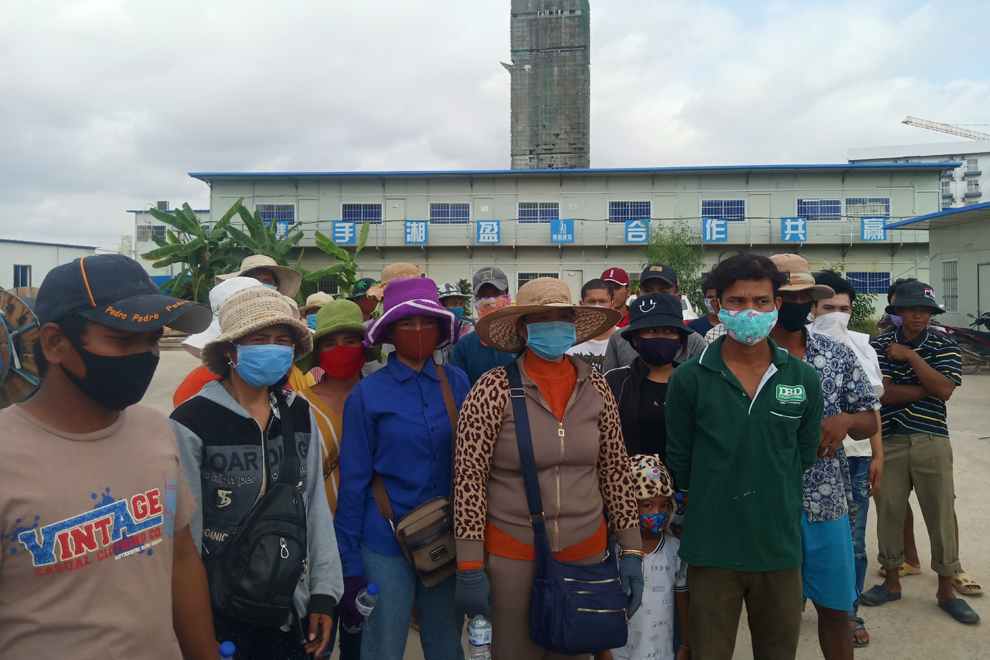 
Sihanouk Nearly 100 construction workers temporarily accept $ 100 to return home after protests at the construction site Thay Soe, who has a Chinese boss in Village 4, Sangkat 4, in Preah Sihanouk province, has fired them and fired them. Do not stay on the job site unopened Bribe wages.

On the afternoon of March 27, 2020, nearly 100 workers gathered in a 12-storey construction site after the owner. The Chinese cut off the water at their temporary residence and forced them to leave without paying them He.

Nhek Sokim, a Battambang-born construction worker, told the Post on Monday that she had been working on more than one construction site. But last year, the company urged workers to overtime and speed up their work That when the job ends, the pay will be white The workers. But at the time of the outbreak, a Chinese employer had announced that workers would be sent home without pay. No more than 2 months left.

“We work for subcontractors that have a continuous workforce, and the company just let us Go ahead and finish it all. When we were working day and night, no one was suspended. The salary we (bosses) have to pay per capita is more than 2,000 and 3,000 more, ”he said.

Piseth Theara, a construction worker who is also taking up the construction of the tile floor, said several workers had said that after workers broke up the protest on both sides. The company has decided to pay each worker $ 100 in return for the house and on April 30th the company will be compensated. More workers.

She expressed concern as the company stated that it was paid only to workers and to subcontractors. There is no solution.

She added: "I have another Chinese boss who receives a direct payment from the company after the company gave $ 6,000 every time. Each and every one of them said, "Just enough to fix the food, wait for Monday to settle again Monday for another $ 3,000." No, all the single workers were $ 100. ”

According to Theara, the money has not yet been opened to them – many contractors, different groups and workers The total is about $ 30,000, which she expects authorities concerned to intervene to provide them with solutions in the event of a crash Deadline has no solution, workers Will continue the protests continued.

Representatives of the Chinese company Thay Soe could not be reached for comment. However, according to Chamroeun Keo, who got the project from Thay Soe, the money was not yet available to her. Her contractor continued to offer more than $ 50,000.

She said she also waited for the money from the company to be dropped, but the company tried to avoid it and refused to open it. Ms. Sok Kea said the money would not be paid and even fired her workers to stay in the works. "All of the workers from the factory are afraid of contracting the virus, but they don't pay any money, they can move." They make use of their labor, no money, no workers. I pity my workers, they are easy to talk to. "The worker came to work. He had a wife with children until he was sent home. He had no money to go home and had something to eat."

Yov Khemara, director of the Preah Sihanouk Provincial Department of Labor, said Monday that Labor Department officials would continue to coordinate the case as the company moved on. Agree some workers compensation and continue to deal in the future. "This is a picture of subcontracting because of the betrayal of the contractor to the subcontractor. When she did not know who to sue, she came to the department and helped her. We look forward to further coordination. ”