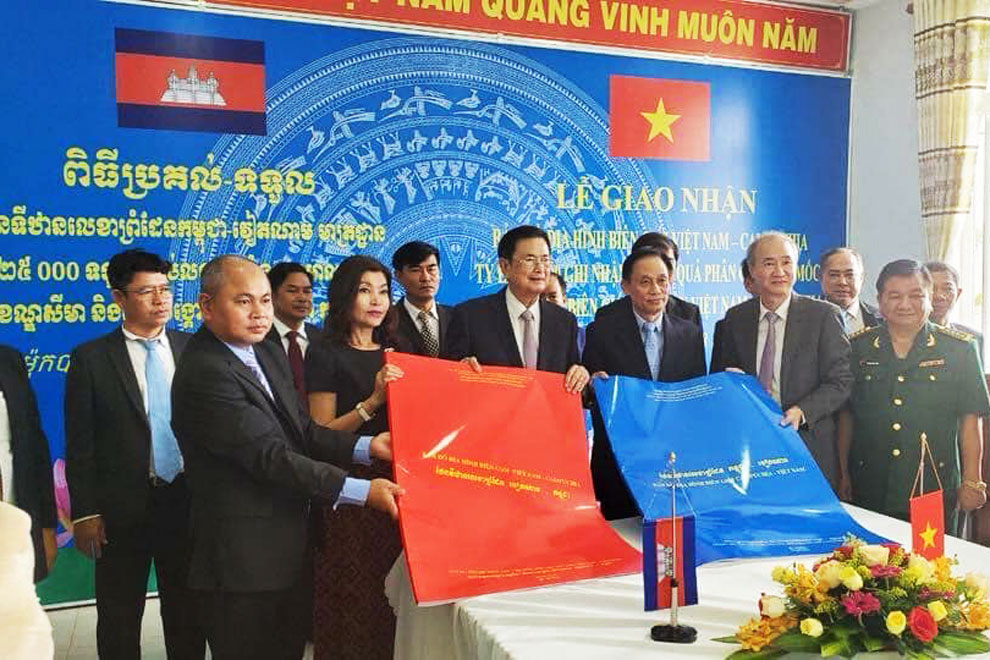 
Phnom Penh: Senior Minister for Border Affairs Var Kimhong, Chairman of the Cambodian Joint Border Affairs Committee, explained the 1 / 25,000 scale mapping and denied the allegations. According to the former CNRP, the map was drawn and provided by Vietnam.

The Cambodian-Vietnamese Border Affairs Committee met with the Vietnamese side on August 1 at the Mok Bai International Border Crossing. Taiwan will hand over a 125,000 scale land border map that demarcates 84% ​​of the borders agreed upon by Cambodia and Vietnam.

Ms. Koy Pisey, Deputy Chairman of the Permanent Secretariat of the National Authority for Border Affairs and Mr. Fong Thelong, Deputy Chairman of the State Boundary Commission of the Ministry of Foreign Affairs of Vietnam During the handover ceremony, after inspecting, verifying and agreeing to accept 500 copies of the boundary book of the Border Secretariat Original. This map book is available in 250 copies in Khmer-Vietnamese and 250 copies in Vietnamese-Khmer, bound as an album for use in Each country.

"This map is a modern digital 4.0 map that clearly shows the boundaries, border posts and geographical location on the ground," she said. "Obviously easy to use, unlike a 1 / 100,000 scale carbon map."

Immediately after the news of the handover of the map was released, the former CNRP, which was dissolved by the Supreme Court, issued a statement. Concerned about this map and claim that this map was drawn by Vietnam through the 1985 Boundary Treaty and the 2005 Supplementary Treaty.

The statement said: "The CNRP sees the acceptance of the new 1 / 25,000 scale map from Vietnam as tantamount. Take a new plot of land of Cambodia drawn by Vietnam. In this sense, the territorial integrity of Cambodia is determined by Vietnam. The former CNRP has refused to recognize the map and 84 percent of the border posts have been set up.

In an interview with the Post on Monday, Var Kimhong, senior minister in charge of border affairs and chairman of the Cambodian Joint Border Affairs Committee, said: Reject the former CNRP's claim that he has no clear basis and has not been researched.

He explained that the 1 / 25,000 scale map was not a simulation of a scale from 1 / 100,000 to 1/25,000, but a new map. This comes after the two prime ministers agreed to sign a map production agreement with map maker Bloom Info. The Danish-based company has won bids from French, Japanese and Finnish companies.

He added that Cambodia and Vietnam were not the makers of the map. Both countries covered the supply of materials for Bloom Info to produce the map in January 2011. But the company later handed over the job to another company, Niras, to continue the work, and completed the job last year. Last year. All stages of the production of this map are closely monitored by the Cambodian side as well as the Vietnamese side.

He explained that before producing the first phase of the map, they used aircraft to fly along the border for a certain length of time to capture Aerial photo or orthophoto map. Both countries and manufacturers then review the orthophoto map for correction.

In the second phase, the company made an orthophoto map and handed it over to both parties to set up the border post together. The two sides then handed over the bilateral agreement, including the location of the posts and border lines, to Bloom Info and Niras for inclusion in the aerial map. And create hierarchical maps showing various aspects, including waterways, roads, fields, and plantations. After installation, the company gives the map to both parties for review, which takes months.

He said that in the third phase, the Cambodian and Vietnamese sides take the map to verify on the ground whether the aerial photographs are accurate as on the ground. No. After agreeing, the two sides determine the location of the poles and let the company map them with the poles and the border line, and check Again to adjust to what the parties have agreed.

The final stage, after a thorough examination, the two parties handed over the work to the manufacturer according to the agreed contract. During the production stage at the printing house, both parties, each with 20 equal members, inspect at the printing house. Once printed correctly, Cambodia accepts all maps to be signed by experts at all levels until he is the final signatory. Later in front of the Prime Minister held in Vietnam last year.

He said: "What we do the handover ceremony on August 1 in Mok Bay is we are done. And Vietnam helps to compile an album like a photo album with a set of 90 tabs, they compile a good album because of their technical skills Help compile for us.

He said that this map is a scale map with a scale of 1 over 25,000, has focal points on all maps and has a demarcated border line. All 84% of the borders agreed.

"The two sides plan to take the results of the changes and submit them to the United Nations in accordance with the charter of the organization," he said. The United Nations as a proof. We keep that as a soft file and a hard file. "But we are doing this after we exchanged the instruments of ratification between our two countries, which are planned to be done soon."