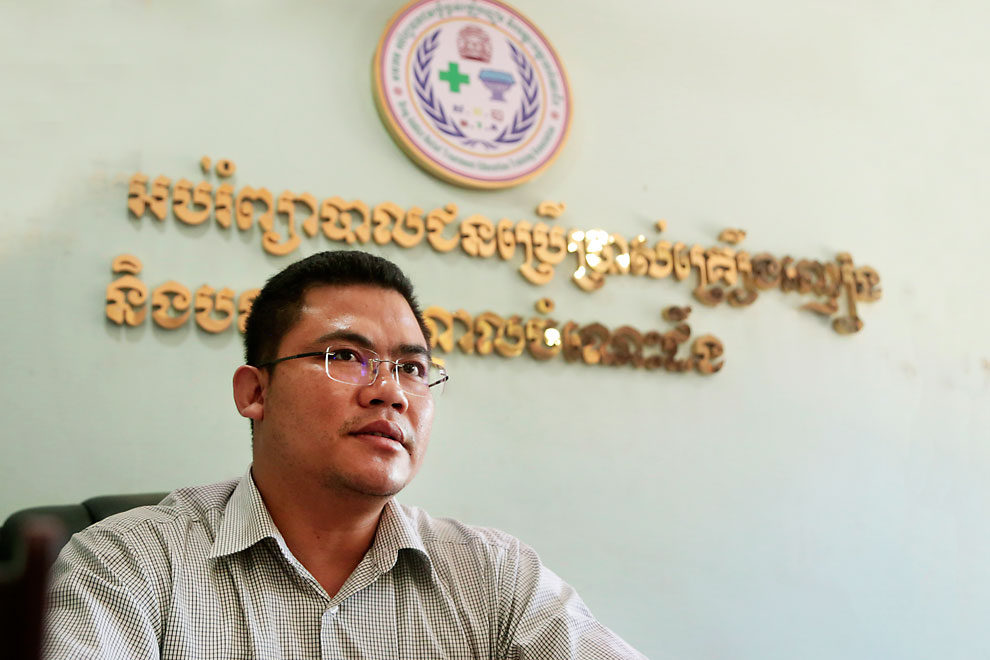 In addition to the government's efforts to treat and rehabilitate, private centers that treat and rehabilitate drug addicts are also involved. A rehabilitation center called "DTA Drug Rehabilitation Center" is located near Dey Huy Market in Sen Sok district. Launched in 2008, it has treated more than 6,000 drug addicts. The center is run by a family with Mr. Hang Choeun as the father and chairman of the center, two sons, Hang Praseur as the deputy chairman and Hang Pito as chairman. Administration.

Mr. Hang Prasor told the Post that the center came from his experience as a drug user when he was in school. High school. He became addicted to drugs at the urging of friends despite his parents' efforts to explain the dangers of drugs This, however. After using drugs for about three years, his parents took him to a drug rehabilitation center in Sen Sok district.

He said the center accepts people with mild to severe drug addiction, saying: "People with hallucinations The drug is so strong that very few other places accept it. Some are almost ambulances from other villages, some are unaware, we treat him until he recovers and can work "Normal."

He described that those who came here for the first time were examined by doctors at the health center to find out the level of addiction and other diseases. Will need to be treated to prevent the disease from spreading to others. They were then incarcerated in a separate room for two weeks for treatment and consultation. Then be added to the group that comes first.

Each room can accommodate up to 30 people with bunk beds, but those who can afford it can stay in expensive rooms. High enough to accommodate 5 people. The center has 9 large rooms and 4 special rooms for the affluent. In addition, there is a separate patient room. For safety, there are about 100 cameras and security guards working 24 hours a day.

Patients here range in age from about 16 to over 30 years and older. Each month, up to 30 or 40 people come for drug treatment. But some months are short and some leave after treatment.

Currently, 346 people (36 women) are on drug treatment. But in total, since this center was opened in 2008, there are 5 patients here. 907 people (469 women). Mr. Praseur said that the number of drug victims has increased significantly by those who come here for treatment from provinces across the country. Including foreigners and some Cambodian expats.

"Because he is warm at DTA, we do not use violence, he has a doctor, a doctor, the right treatment, a long experience," he said. Years and have an education. "The most important thing is psychological education, because the drug addict has a chronic mental illness."

The cost of accommodation here depends on the period: $ 570 for 3 months, $ 960 for 6 months and $ 1620 for one year. He said the price was not expensive considering the cost of the center for residents.

"But plus the hands and feet to the service, 4 or 5 dollars a day for one victim for three meals a day," he said. Learning program unless he pays for overtime. Even soap, laundry, mosquito nets, blankets, clothes, pillows, mats, and drug treatment are all my responsibilities. "Unless he has a drug-related illness, such as toothache, intestinal cancer, appendicitis, which requires external treatment."

He explained that the treatment of drug addicts requires education, medical treatment, exercise, nutritional care and teaching, knowledge, experience, adaptive lifestyle. Stay with family and friends to avoid clutter in the future. "When you use drugs, no matter how big the job, you start to lose responsibility. I have children, I have grandchildren, I don't know anything, I only know how to smoke, I only know how to eat, I only know how to spend, but I do not know how to find, and a family with one member Drugs are not as happy as before, they are all gone. ”

In addition to drug rehabilitation and psychological education, clients receive training in life skills such as hairdressing, blacksmithing, carpentry, lighting, tailoring, and agricultural chefs. Animal husbandry, construction, motorcycle repair and administration. According to the daily schedule from 6 am to 6:30 pm, the center organizes daily activities such as exercise, sports, learning English and Chinese hygiene, mental education, entertainment, law and ethics, self-study and some other programs.

Mr. Praseur says drug rehabilitation centers are a good place for change because those who come to the center are not free to enter and leave. Meet a friend who can get you back to drug use. But they have a clear schedule for activities.

"Our room was monitored, there was a camera, we could not leave him," he said. All victims who come to this place are cared for, monitored and managed by the management. Sometimes we do not get close to him, but we have our staff to help him. "Some of the people who came could not take a bath. We helped them to take a bath, to tie mosquito nets and to eat."

He said that the common factor that makes drug addicts can be cured depends on the individual, treatment, education at the center and help. Support from guardians.

He called on parents with drug-addicted children to be encouraged and not to leave their children in the center because of this. There are no good results. He continued: "For me, this private center is really to add, subtract, multiply, divide, there is not much left, but we have worked This is why, despite the loss, we have to keep trying. ”

Hak, a 28-year-old drug user, has been treated here for more than a year. He had been using drugs in high school since 2008 due to bad friendships. After falling into drugs and dropping out of 11th grade, her parents took her to several centers for treatment but did not have any. Efficiency.

Seems to be improving both physically and mentally, but not 100% confident. "I would like to urge young people to stay away from drugs, to think about the future and Do not associate with bad friends and say no to drugs.

There are 3 private centers, 4 NGO centers and 11 state-run centers. Community-based treatment is provided at national hospitals, referral hospitals and health centers, which currently have 450 facilities, with a population of 3,382. .

Meas Virith, secretary-general of the National Authority for Combating Drugs, said the 2012 law on drug control encourages private centers and communities in Participation in the provision of medical treatment and rehabilitation services for drug addicts. These centers must be accredited by the relevant ministries and must report to the National Anti-Drug Authority.