More than 100 organizations: Microfinance debt should be suspended and returned to title holders as the epidemic spreads 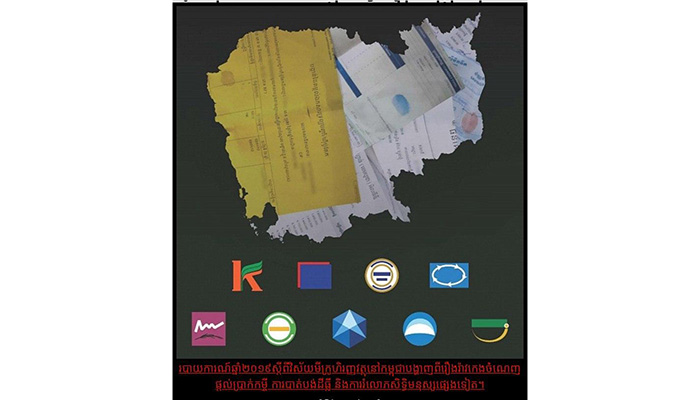 More than 100 organizations: Microfinance debt should be suspended and returned to title holders as the epidemic spreads

PHNOM PENH – A group of 134 civil society groups have issued a statement stating that microfinance debt should be suspended and the title returned to property owners during Cambodia's growing outbreak of the disease.

The statement issued by the April 27, 2020 report says that millions of Cambodians who are struggling with the economic crisis from the outbreak of the disease 19 are further suffering from The ongoing debt crisis in the country stemmed from Microfinance's more than $ 10 billion in loans. Some financiers.

Currently, more than 2.5 million people are stranded on small loans with an average loan rate of $ 3,800, the largest in the world, the letter states.

It says that puts the livelihood, health and safety of land, millions of Cambodians at risk.

Although the government has already taken some measures, they say, “We further request the government to consider ensuring that MFIs are quick to suspend repayment of loans and interest. For a minimum of three months and returned to the millions of land titles concerned The current small loans that were placed as collateral (mortgages) by microfinance institutions. "

134 states that these measures are necessary to ensure that people can continue to live in the crisis without risk to their health or housing, and can avoid risky loans that may lead to employment cases. Debt, human trafficking and other human rights abuses.

According to Minister of Health Mam Bunheng during a press conference on "Update on HIV 19" this morning, only three people are still being treated for the disease, while the number of recoveries has risen to 119.