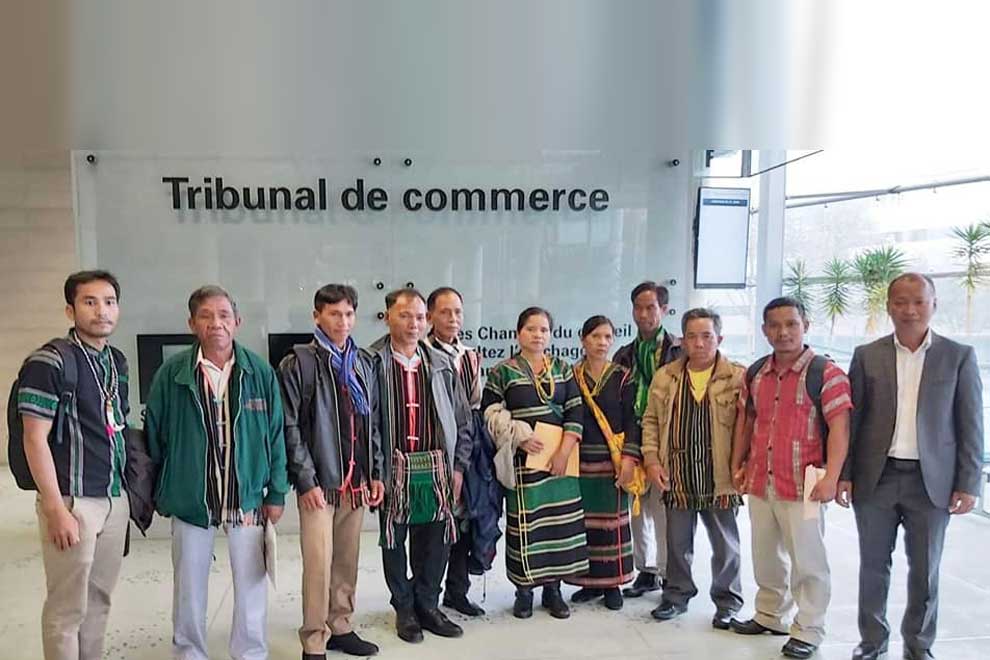 Kreung Tola, a representative of the Pnong indigenous people, told the Post yesterday that in connection with this issue, a French company called Bullerre through Sokfern has been clearing and planting rubber on the land of the Pnong people since 2008 and people have been protesting. Through villages, communes, districts, provinces and national courts did not succeed.

He said that is why the indigenous people decided to protest and file a complaint to the court in France. Expect justice because France has more respect for the law than in Cambodia, but still does not receive justice.

"We were protesting at that time, people were selling chickens, pigs and cows and buffaloes to get justice," said Kreung Tola. Protests are rampant, but still not fair, only recently submitted to France in connection with companies violating the rights of indigenous peoples "But now French courts are also violating citizens' rights."

According to Mr. Kreung Tola, only one case was filed in the French court, but the judge divided the case into two cases. Denied the residents of Busra commune as migrants, not indigenous people, although There is a certificate from the authorities.

The second case claims that the citizen submitted the evidence before the court and, in particular, the court ordered the citizen to pay To the company another 20,000 euros.

However, Mr. Kreung Tola stated that the people have decided to file a further complaint to the French Court of Appeal, expecting justice from the institution. This is for the indigenous Phnong people who have been protesting for many years.

According to a statement issued by the representatives of the Pnong indigenous people on July 14, 2021, all 97 families did not Agree to this decision and will entitle their lawyers in France to continue in accordance with the procedures and procedures that French law Allow appeals.

The statement read: "Once again we are disappointed and angry at the decision to fine us the damages. To 20,000 euros while we lost our land, lost our forest and traditional economy and suffered a lawsuit in Cambodia as well.

The statement added: "We have already complained to the authorities at all levels and there is no solution, so we decided to sue. "To the French court to make Bullerre responsible for the damages of its decision through the Suffolk in the French court."

Neang Vannak, a spokesman for the Mondulkiri provincial administration, said yesterday that he did not receive much specific information regarding the case. But just know that the people who claim to be indigenous to the Pnong went to clear the land in the food stream or other canals To farm or cultivate other crops. In fact, all these lands are state lands.

Regarding the case related to the decision of the French court, Mr. Neang Vannak confirmed that it was a correct decision and the Cambodian court also decided This is because they have their clear reasons before deciding what to do.