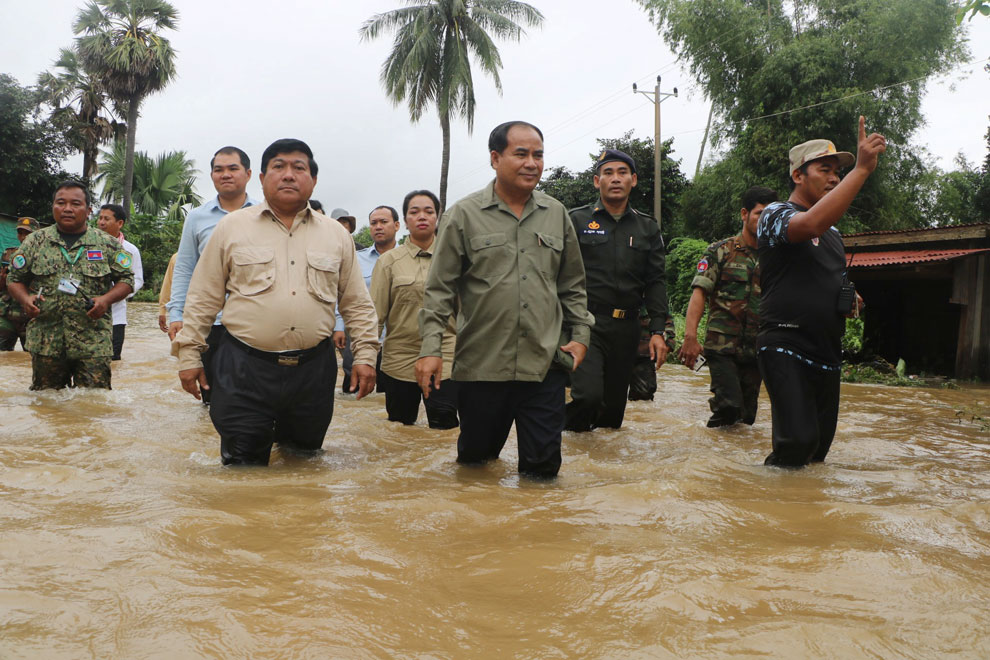 
Phnom Penh: The Ministry of Water Resources and Meteorology yesterday called on people living along the Sekong, Sesan and Sre Pok rivers in Stung Treng province to increase More vigilance for floods caused by these three rivers.

The call was made after reviewing the situation of the three river levels rising after the effects of Typhoon Lin. Linfa and the Low Pressure System (ITCZ) caused heavy rains for several days in a row, causing flash floods in the area. Some of the lowlands adjacent to waterways and in the rainfed areas of some provinces in Cambodia.

"These two influences are pushing up the water levels of the Sekong, Sesan and Srepok rivers in Stung Treng province," the ministry said. "Soon there will be more floods in some parts of the lowlands next to the waterways and the highlands of the province."

With the rise of these three rivers and the distribution of rainfall in the catchment area of ​​the Mekong Basin The upper reaches also pushed up the Mekong River in Stung Treng, Kratie and Kampong Cham provinces, but accelerated. This is below the altitude level for caution yet.

However, the Ministry of Water Resources and Meteorology urged the relevant ministries, institutions, local authorities at all levels and the public, especially people living side by side. The Sekong, Sesan and Srepok rivers increase vigilance and regularly monitor the water level in these three rivers to prevent and reduce Various risks in local communities. For provinces related to the river regime, measures must be taken to open sluice gates to enter canals, reservoirs and lowlands.

"Although the Sekong and Mekong levels have not yet risen to the alarming level, heavy rains have continued to fall," he said. In recent days, floods have flooded the homes of more than 1,000 families in five communes in Thala Parivat district. At the moment, our authorities are intervening to help people in the affected areas.

Mr. Vy Samnang, Governor of Kampong Speu Province, told the Post that the flooding of rainwater and water flowing from the mountains and some streams and rivers The dam collapsed in Thnal Bot village, Omlaing commune, Thpong district on Sunday night.

"The collapse of the dam caused the flooding of 170 families, including 11 houses," he said. Completely damaged by runoff. "But it does not affect the lives of any people."

Looking at the water level in some reservoirs and rivers in the province, the water rose continuously, Mr. Samnang Call on all people, especially those who live in the lower part of Chan Thnal Dam, the upper and lower part of the sluice gate And along all Stung Prek Tnout rivers, increase vigilance and be highly prepared as this flood is likely to occur along The above area eventually. At the same time, he also ordered the Provincial Administrative Unity Command, the three types of armed forces, specialized departments to be responsible for their duties. Respectively.

The collapse of a dam in Kampong Speu province and heavy rains for several days in a row caused flooding. Occurs in parts of western Phnom Penh, causing temporary traffic jams on some roads in the capital city This too.

To solve this crisis, Mr. Lim Kean Hor, Minister of Water Resources and Meteorology, on Sunday night led the Ministry's technical working group to inspect the water situation. On the back of the Stung Prek Tnaot delta dam, which is being disturbed by the flooding of Stung Prek Tnaot in the western part of Phnom Penh and Kandal province.

"The water situation continues to rise, but there is no harassment of Phnom Penh yet," he said. The Ministry's technical team has closed many dragon caves along the back of the dam and guarded 24 hours a day. One week ago.

At the same time, he called on the institutions that are working on the site, as well as private companies and people to maintain the size or waterfront. Old to ensure the effective release of water in a timely manner, otherwise Phnom Penh will be seriously threatened.

From October 1 to 12, 2020, floods caused the flooding of 10 capitals and provinces, including Phnom Penh, Kandal, Kampong Chhnang, Kampong Speu, Pursat, Battambang, Pailin. In Banteay Meanchey, Stung Treng and Svay Rieng, 11 people were killed and more than 1,200 families were evacuated. Safe place. This is according to Mr. Khun Sokha, spokesman for the National Committee for Disaster Management on Monday.