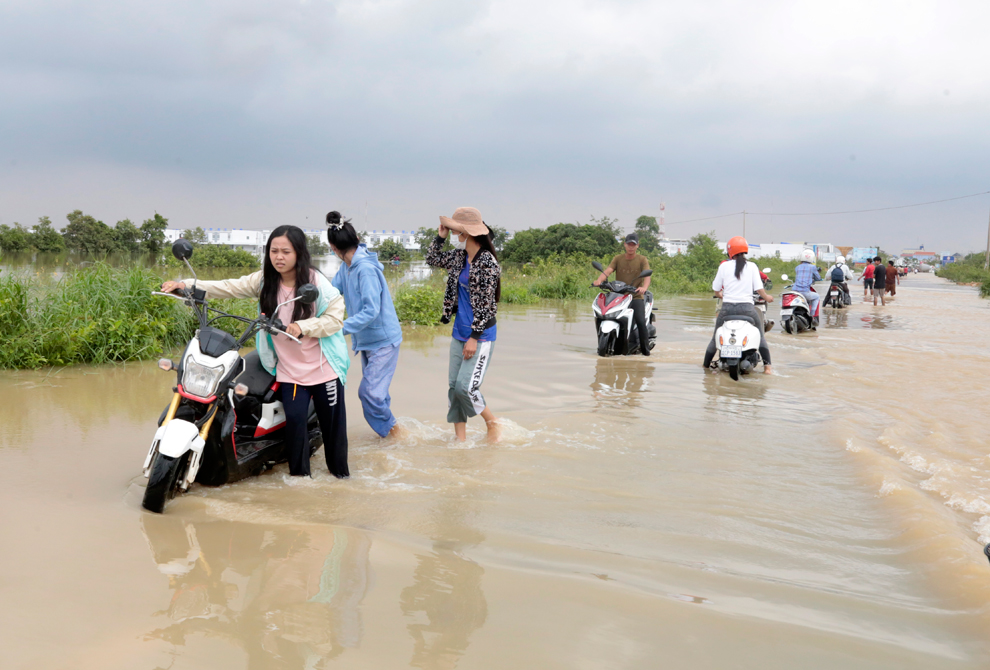 
Phnom Penh: After inspecting the condition of roads flooded by the floods, the Ministry of Public Works instructed the specialized departments in the capitals and provinces that are Flooded, inspected and issued a temporary ban on transit traffic on roads that are flooded and flooded Strong to avoid danger.

Regarding this instruction, Mr. Moeng Youleng, Director of the Department of Public Works and Transport of Kandal Province, told the Post yesterday that on the evening of October 14, he issued a statement Notification 1 on the decision to close the traffic of all types of heavy trucks on National Road No. 2, 3, 4, 5, 20, 20A, 21 , 21A and National Road 21B in Kandal province temporarily.

"The temporary suspension of traffic on those sections is to keep the bridges and bridges from collapsing and to ensure traffic," he said. Safe. "At the moment, those sections of the road are being flooded and flowing at a depth of 2.5 centimeters or more."

At the same time, Takeo Provincial Administrative Director Mr. Moeng Vuthy also told the Post that on National Road No. 2 and National Road No. 3 in the area. Takeo province is also banned from passing through heavy vehicles.

In Phnom Penh, after the collapse of the Stung Stung Prek Tnaot Dam on Wednesday morning, thousands of houses and road sections In the southern district of Dangkor, Phnom Penh was severely flooded and impassable. In this dire situation, Mr. Khuong Sreng, the Governor of Phnom Penh, yesterday morning decided to close Street 217 from Chamkar Dong to the roundabout and the road. Some in this district are temporary.

Sim Tola, administrative director of Dangkor district, told the Post yesterday that 11 out of 12 districts in the district had been flooded. Flooding and flooding of Prek Tnaot. But he did not say how many families were affected by the floods.

"At this time, we do not know exactly how many houses or families have been affected by the floods," he said. No, because the immediate response mechanism now is that we have to take into account the lives of the people by evacuating those who have been severely affected. "Safe place first."

The catastrophic flooding of Prey Sar Prison (M2) in Sangkat Prey Sar, Khan Dangkor, which has about 1,400 women and juveniles. Extreme levels of flood danger were announced in Prey Sar (M1) and PJ prisons. Security.

A spokesman for the Ministry of Interior's General Department of Prisons, Nuth Savana, said yesterday that more than 800 female and juvenile prisoners had been affected by the floods. About 1,400 prisoners of Prey Sar Correctional Center (M2) were transferred to Prey Sar Correctional Center (M1) and more than 500 Others were transferred to the PJ Detention Center of the Phnom Penh Municipal Police.

According to Mr. Savana, in the courtyard of the detention center, the water flooded to almost 1 meter, which can not serve the administration. "Currently, water is also seeping into some parts of the Prey Sar Detention Center (M1), but Our prison guards are using a pump. "Otherwise, we do not know how to evacuate prisoners from this prison."