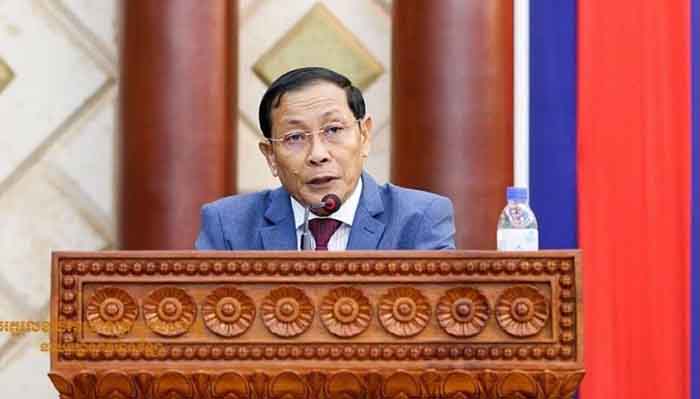 Phnom Penh: Mr. Sak Setha, Permanent Secretary of State of the Ministry of Interior, clarified the Vietnamese side's camp in the border area during March 2020.

Meanwhile, the Vietnamese side responded to the Cambodian authorities that Vietnam would dismantle the tents after Kovid 19 was completely eradicated in the near future.

In addition, the Ministry of Interior requested the Joint Committee on Border Affairs to negotiate with the Vietnamese side to remove the tents and maintain the status quo along the border, which has not yet agreed on the border and set up posts by letter. June 1, 2020.


In connection with the above issue, based on the letter from the Kandal Provincial Administration, the Cambodian Ministry of Foreign Affairs also appointed an ambassador to the Vietnamese side on May 13, 2020 to protest the Vietnamese side's camping activities between the Mekong River and the river. Bassac from border post No. 241-245, and along Prek Chrey Thom-Prek Binh Yi between border post No. 247-253 and demanded that the Vietnamese side remove the tents and request that the situation remain the same in the border area. These are in line with the spirit of the two Prime Ministers' joint press release of 1995 and the 2005 Supplementary Treaty.

Mr. Sak Setha confirmed that as of July 2, 2020, the Vietnamese side had removed eight tents. In that, tents were set up in the border area, which did not agree on the measurement of the border and a total of 42 border posts were set up.

Meanwhile, the Ministry of Interior requested the Vietnamese side to strictly abide by Article 10 of the Cambodia-Vietnam Border Statute of 1983, Point 8 of the Joint Statement of 1995 and Article 5, Article 3 of the 2005 Supplementary Treaty and related agreements. Between the two governments, the situation should remain the same in the disputed area, avoiding any unilateral action that could affect this important task until the two joint border commissions agree on the demarcation and post in that area. .

– Request the provincial administration and the competent forces of Cambodia to continue to cooperate with the Vietnamese side in preventing illegal entry and exit activities along the border in order to prevent the spread of Kovid 19 with high efficiency.

– Propose to the provincial administration and relevant authorities along the Cambodian-Vietnamese border to continue to monitor the activities of the Vietnamese side.