The Ministry of Foreign Affairs and International Cooperation respondsFor criticism of the Office of the United Nations High Commissioner for Human Rights on the rule of "emergency state" Cambodia. Cambodia is committed to fulfilling its obligations in accordance with Article 4 of the International Covenant on Civil and Political Rights, if declared in a state of emergency. The law on "managing a state of emergency" was applied to the public interest.

On 17 April 2020, the Ministry of Foreign Affairs announced that the reaction came after the UN High Commissioner for Refugees. Human rights letter OL KHM 1/2020 dated 9 April 2020 on a joint letter of the UN Special Rapporteur to the Deputy Prime Minister Prak Sokhon, Minister The Ministry of Foreign Affairs and International Cooperation, in its memorandum, the Special Procedures Working Group of the Office of the UN High Commissioner for Human Rights Expressing your own views on the draft “State of Emergency” in Cambodia.


The Permanent Mission of the Kingdom of Cambodia to the United Nations Office in Geneva highlighted the following 11 points:

1: It is only normal when there is growing concern for the threat, danger, and risk of human life By Corona (Kov 19) Many countries are forced to take drastic measures to protect people's lives and public health. With restrictions on freedom of the neck Conversion, assembly and privacy. At least 70 countries around the world have declared a state of emergency and take action to close the country to prevent the spread of the virus. This.

The International Covenant on Civil and Political Rights and the Universal Declaration of Human Rights provide for the temporary restriction of certain rights and freedoms in the situation Emergency. But those restrictions will be imposed by the law for the public good and for the common good.

3. Cambodia has adopted concrete policies and measures to prevent and prevent the outbreak. Among other measures that have been put forward is the drafting of the 'National Emergency Management Act' which is currently under review. By the Senate.

5. This Law is authorized by international and national instruments on human rights such as the Constitution of Cambodia (Articles 22, 31, 86 and 102) Universal Declaration of Human Rights (Article 29), ICCPR (Article 4), UN Human Rights Council Interpretation The International Court of Justice..

6: Like the "State of Emergency" law worldwide, the Draft Law states the procedures and requirements for declaration. Emergencies, introduction of measures by the government, obligations of government reporting and sanctions for blocking and violating government measures . The law must impose penalties for non-compliance to ensure its effectiveness. Compared to the laws of other countries in Asia and Europe, Cambodia's draft law is more relaxed in terms of both powers and penalties. Various.

7. When applying the law, the principles of accountability, proportionality, and necessity shall be applied. The power given to the government for action when a country is in a state of emergency is not an unlimited power. Articles 86 and 102 of the new Constitution provide for mechanisms for oversight by Cambodia's two chambers. In addition, law enforcement officers who follow the will and violate the law will be punished by the court.

8. The law of "state of emergency" shall be applied only in cases where additional measures and needs are needed. To protect and maintain security and public order to protect people's lives, public health, public interests and property. In addition, emergency deployments must be declared within a specific timeframe across the country or in a specific geographical area where the situation is severe and not Manageable.

9. Cambodia vows to fulfill its obligations in accordance with Article 4 of the International Covenant on Civil and Political Rights, if promulgated An emergency and the 'state of emergency' law have been implemented for the benefit of the public.

10: While the epidemic of cholera epidemic 19 is severe, claiming that the emergency rule of the country is a violation Human rights are not only groundless claims but also represent partial and biased human rights practices. This is a global obligation for authorities and institutions, including the World Health Organization and the Office of the UN High Commissioner for Human Rights To ensure and protect the lives of the people.

11 However, without mentioning the concerns referred to only in Cambodia, this should not be detrimental to the government's obligation to do so. Protecting people's lives and public health, protecting national security and maintaining public order. This practice is within the sovereign right of the government, who is responsible to protect and protect its people from threats and harm. Of all kinds to the state of public health and to the spread of disease as a result of wars and foreign invasions. Kolab 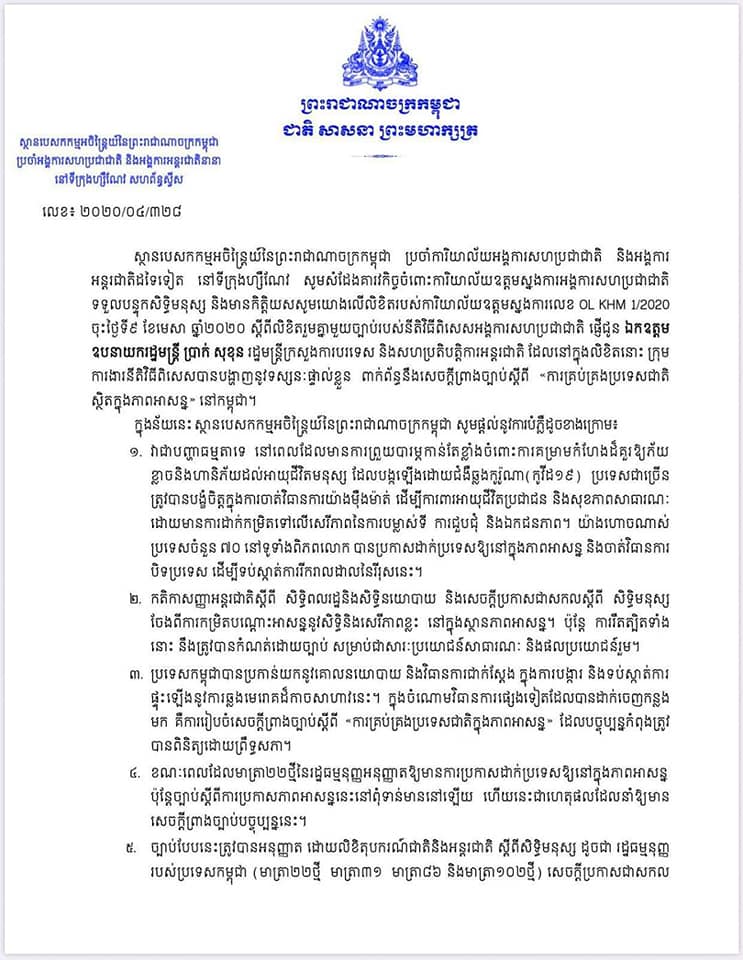 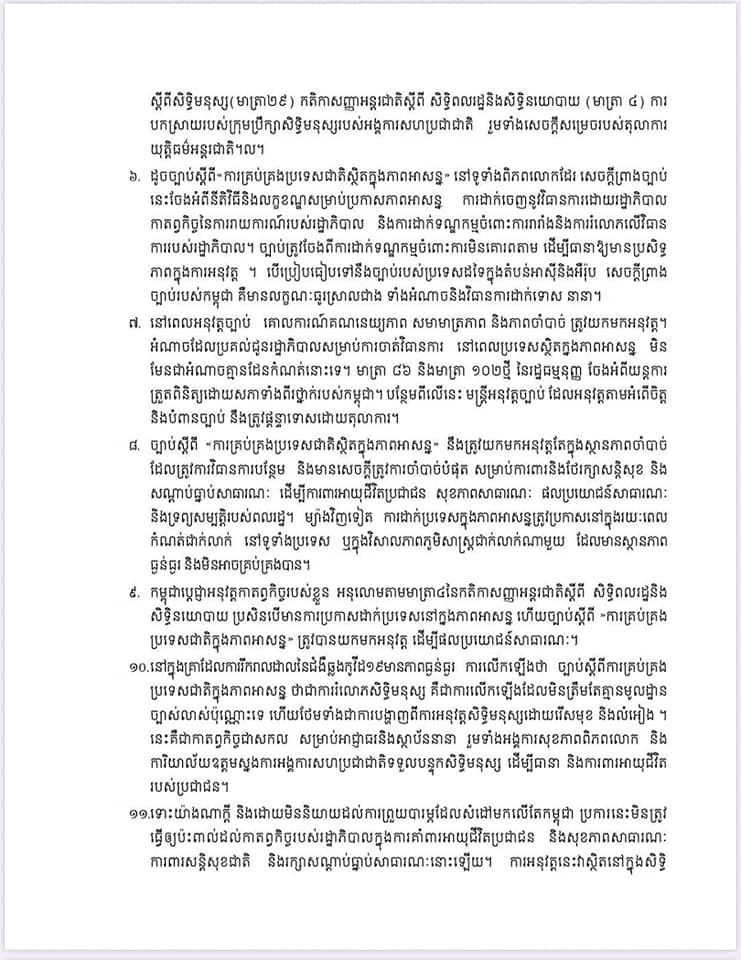 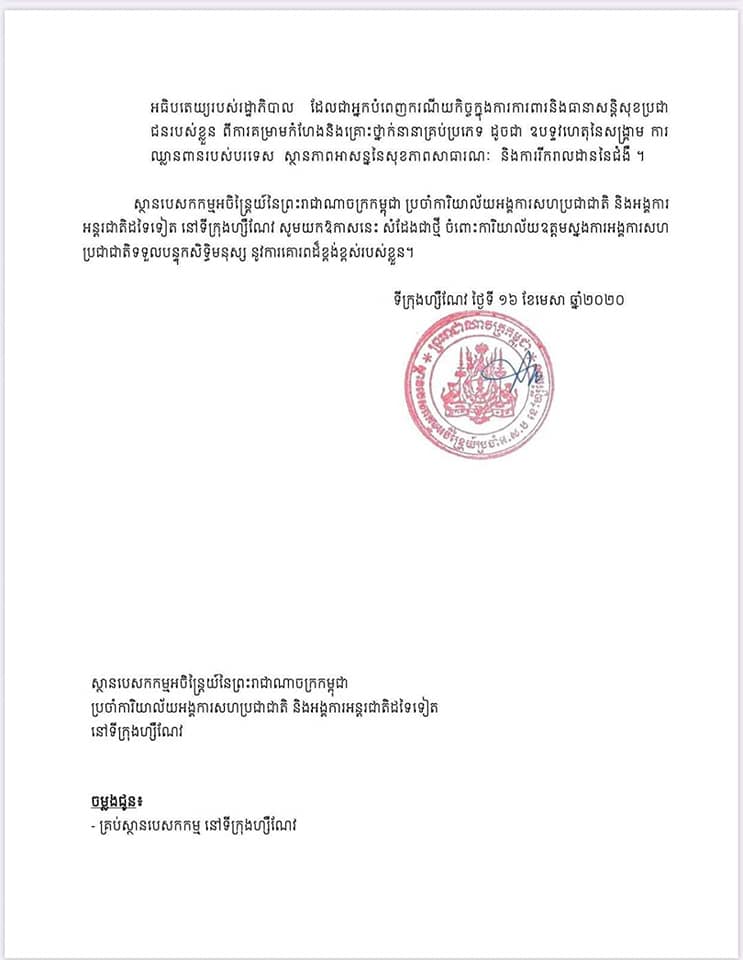