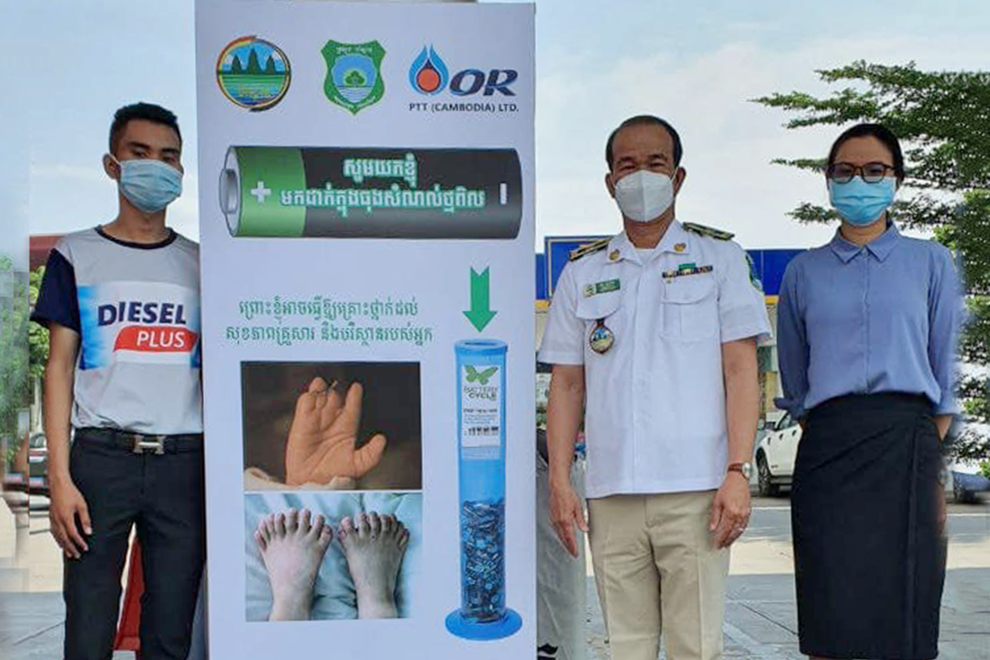 
Phnom Penh: The Ministry of Environment has been implementing a project to collect battery waste in public places to prevent the spread of harmful substances into the environment and to protect health. People from the effects caused by toxins from the battery waste.

The Ministry of Environment announced on July 13 that it is collaborating with private companies to collect used battery waste bins. In public places, including Borey, shopping malls and gas stations. The Ministry continued that the places where the Ministry has placed bins for collecting battery waste include Chip Mong Norom Mall and Chip Mong Bak Touk Borey, Peng Huoth Boeung Sno and PTT gas station, Wat Neak Vorn, Bokor and Phsar Touch.

In addition, the Ministry of Environment would like to thank the site owners and people for their cooperation and participation in the implementation of the waste collection project. Batteries for the environment, we have no battery waste and called on all citizens to participate and help promote the battery waste project This broadly.

Regarding the implementation of this project, Mr. Say Sam Al, Minister of the Environment, wrote on his Facebook page on July 13. "Expired batteries contain dangerous substances," he said. Please give up safely.

Mr. Hour Chhay Ngan, Founder of Crane Cambodia and President of the Clean Environment Project, expressed his support for this project. A great step for public health and the environment.

He said that in order to implement this project more effectively, the Ministry should increase the location of battery storage bins more widely to Make it easy for users to store.

"People need to be more involved by keeping the batteries separate and packing them at a battery storage location," he said. In addition, the Ministry should put buckets in the general market, because the people who use batteries have a lower standard of living, so he Can use a lot of batteries. "Another school bucket is a good scenario because we can get our students to pack their batteries properly. To put in the bin, for example, batteries are a hazardous waste, so teachers can have a program to score points for students and can Explain to the next generation of students that battery waste is dangerous and has health problems, so it must be stored properly.

To join the Ministry of Environment in this work, Mr. Chhay Ngon, along with more than 1,000 members, will participate in disseminating this project to the public. Through social media, and when the situation of Kovid 19 improves, the team will broadcast live on the ground .

According to the Ministry of Environment, waste batteries are considered hazardous because they contain highly toxic substances such as mercury. Nickel and lead ions. Therefore, improper storage or disposal of battery waste will cause the release of hazardous substances into the environment. The place will have a serious impact on human health.

According to the Ministry of Environment, those effects include kidney damage, depletion of nutrients in the bones, causing damage. Nervous system damage, muscle loss, memory loss, cancer, immune system damage, cell damage, miscarriage. Babies are born with abnormalities and cause neonatal malformations or fetuses.