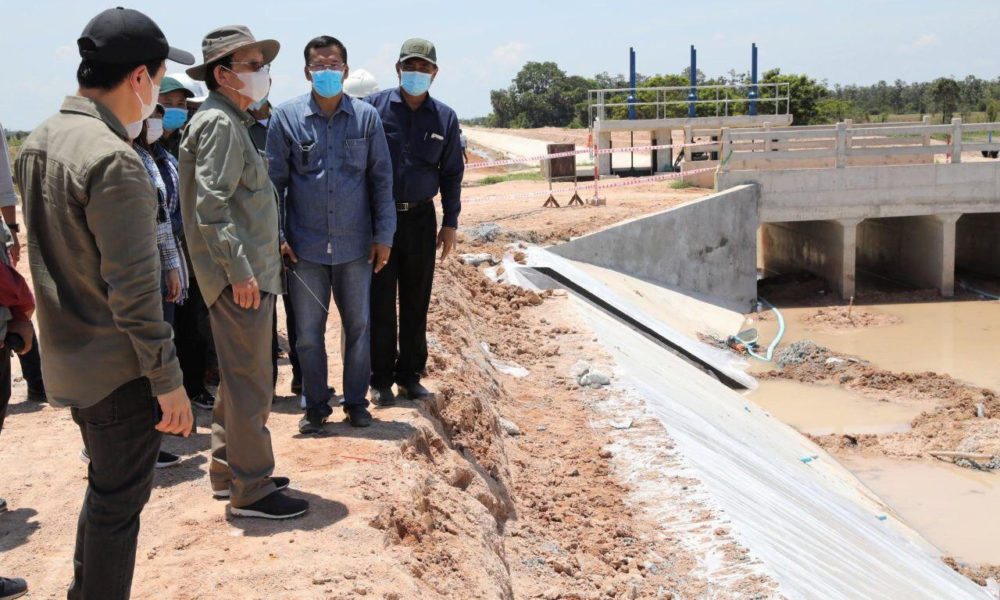 Phnom Penh: Mr. Lim Kean Hor, Minister of Water Resources and Meteorology, inspected the Lumhach project located in Baribo district, Kampong Chhnang province on Friday morning, July 10, 2020. By Mr. Chea, Secretary of State, Undersecretary of State and Technical Officer of the Ministry, together with the Board of Governors of Kampong Chhnang Province, Director of the Department of Water Resources and Meteorology.

The Lumhach project is one of six sub-projects of the West Tonle Sap Irrigation and Irrigation Improvement and Rehabilitation Project under Japanese concession financing. Construction began in March 2016 and is scheduled for completion in late December 2020. As of today, the work has achieved about 84.7% of the total workload of the project.


The Minister informed that what is the technical characteristics of the irrigation system that the Ministry has been implementing at present according to the actual geographical situation, such as this space project, is another new irrigation structure that is not comprehensive. Not only for irrigation work but also for daily use of more than 1,000 families located in Boribo Teuk Phos and Rolea Bier districts of Kampong Chhnang province also benefited from this sub-project. Also. At the same time, the Minister also recommended to the working group to find any job that uses labor cash to provide employment to unemployed workers to facilitate daily life in this stage of Kovit 19 in accordance with the strategy of the Royal Government.

All these achievements show the attention of the Royal Government under the most wise leadership of Samdech Akka Moha Sena Padei Techo Hun Sen, Prime Minister of the Kingdom of Cambodia, starting from the restoration, construction and development and progress. To expand and strengthen water management capacity to ensure adequate water supply for growing all types of rice and for daily consumption, as part of promoting the national policy on effective food security and rice export strategies. Issued by the Royal Government during the phase of climate change.

At the same time, the Minister would like to thank Japan for always assisting the Royal Government of Cambodia in building and developing infrastructure in almost all areas and praised and appreciated the efforts of the working group to implement the improvement and rehabilitation project. Re-irrigation and drainage system west of Tonle Sap Lake, Department of Water Resources and Meteorology and local authorities related to the work achieved as planned and please adhere to sanitation as announced by the Ministry of Health. The second wave of Kovit 19.