Minister instructs alumni and clerks to strive for justice for citizens 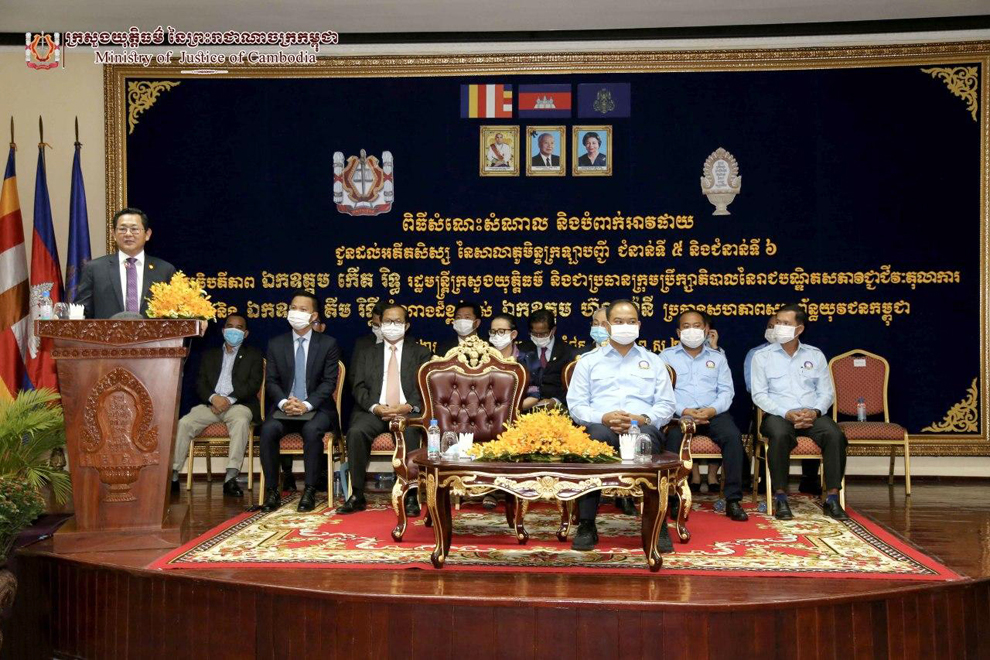 Minister instructs alumni and clerks to strive for justice for citizens


Phnom Penh: The Minister of Justice, Mr. Keut Rith, instructed the alumni and students of the Royal School, registrar of the Royal Academy of Judicial Professions to strive to provide justice services. Good for the people, while currently there are a total of 688 registrar students.

Mr. Keut Rith said this while presiding over the ceremony and wearing official uniforms to the alumni of the Royal School of the 5th generation and The sixth generation of the 210-member Royal Academy of Judicial Professions on Tuesday, October 13.

Mr. Keut Rith praised the efforts of the leaders and officials at all levels of the Royal Academy of Legal and Judicial Professions in producing resources. People in the field of justice, including judges, prosecutors, clerks, bailiffs and notaries, with quality and knowledge to provide justice to the people.

"The important role of the clerk in all aspects of the procedure is indispensable as an aid to the judiciary and Prosecution. "Students must strive to provide justice, which is a good public service to the people."

The Minister also thanked all the clerks who actively participated in the campaign to resolve the congestion in the court. Capital-Province in the past and instructed all students and alumni to adhere to the three principles when performing work.

Those principles include: To perform their duties and responsibilities properly and strictly in accordance with the law and with professional ethics. 2 Respect the noble approach of Prime Minister Hun Sen, which is the core of governance: "mirror, bathe, scrub, treat and operate" And 3 respect the working approach set out through the case congestion resolution campaign "fast, accurate, fair and non-corrupt". Must be implemented regularly to provide justice services to the people and be implemented forever, that is, not only during the campaign period.

According to the report of Mr. Chhorn Proleung, President of the Royal Academy of Judicial Professions, the Royal School of Registration has shown that since the beginning of training the second generation of clerical students From 2008 to the present, a total of 688 clerk students and 116 7th generation clerk students are receiving training.

Justice Ministry spokesman Chin Malin said yesterday that the Minister of Justice's instructions were not in the past. The work is not good. But as a reminder to the clerk alumni to strive to fulfill their duties.

"The duties and responsibilities of the clerk are to provide technical assistance to judges and prosecutors in carrying out procedures related to Proceedings, so his role is important. "Without a clerk to help, some cases may be delayed and congested."

Mr. Sok Sam Oeun, President of the Legal Aid Council, said that the clerk has a very important role to play in speeding up the case process. Reach out to judges and prosecutors soon.

"If his clerk works in a transparent and clean manner and is not involved in soliciting money from citizens, the court will not exist," he said. Problems and there can be no delay in resolving the case. "His judge relies on the clerk to expedite each case."