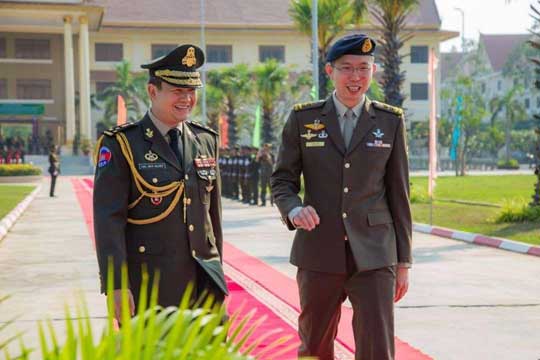 In this meeting, on behalf of the Royal Cambodian Armed Forces, Lieutenant General Hun Manet welcomed the first official visit of the Singapore ground commander to the Kingdom of Cambodia, which can be seen as a symbol of continued strengthening. The two countries' naval cooperation strengthened. Lieutenant General Hun Manet also took the opportunity to thank the Singaporean Army for always helping to train Cambodian young officers and requested that Singapore continue to provide more support in the field of HR training in the Royal Cambodian Armed Forces. .

Lieutenant General GOH SI HOU thanked the hospitality and warm hospitality of the temples in Siem Reap and noted the rapid development of Phnom Penh in a peaceful environment. . Lieutenant General GOH SI HOU also confirmed that the recent visit of the Cambodian ground commander and his first official visit is a positive sign. For further enhancing the cooperation of the two armies, they will continue to carry out the tasks discussed and agreed to in the future. The result is better.