Full Story: During his visit to Cambodia, the two sides focused on border issues 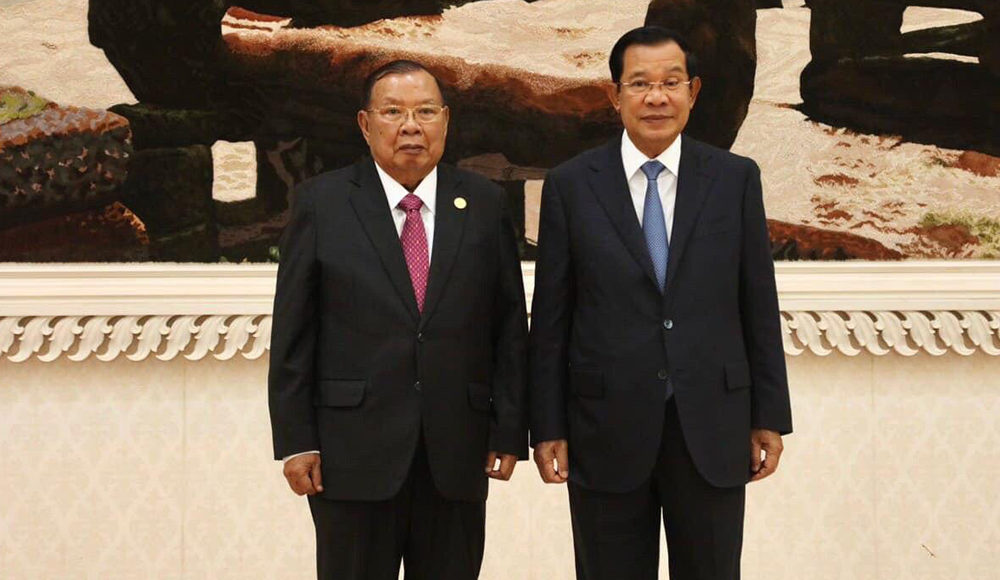 Full Story: During his visit to Cambodia, the two sides focused on border issues

Phnom Penh: During the visit of Bounnhang VORACHITH, Secretary General and President of the Lao People's Democratic Republic to Cambodia, for two days from 9-10 February 2020, the two sides focused on On the border issue, to become a peaceful border after the two countries have had border issues in the past.

The border dispute between the two countries lies near Ola Ai and Ou Tavao border areas of Stung Treng and Attapeu province, after Laos deployed troops at the end of 2017. It was agreed to withdraw the troops. Due to clashes on the border, the two leaders also asked the French president to send experts to help.

Cambodia and Laos have already demarcated 86% of the border, with 14% remaining. Both sides are committed to finalizing soon.

Bun Nheveng is on a trip to Cambodia at the invitation of His Majesty King Norodom Sihamoni.

During a working meeting between Mr. Bun Nheanvor on February 9, 2020 with the President of the Senate, Say Chhum, the two sides pledged together to turn the border into a peaceful, friendly, cooperative and development frontier The sector in particular brings peace to the people.

He also congratulated 86% of the demarcation and border demarcation, while 14% of the two countries are paying close attention.

"This ambitious result demonstrates the full commitment of the goodwill and goodwill to resolve border issues between the two countries to turn the border into a peaceful, peaceful, friendly and cooperative border," he said. And development in all fields brings lasting peace to the nation and its people To be an heir to the next generation. ”

He said that Laos and Cambodia always work together to maintain solidarity, friendship and cooperation, despite the challenges the two countries have been striving for in harmony with their lives. The people are getting better.

Samdech Heng Samrin expressed his satisfaction with the progress of the traditional friendship and comprehensive cooperation between the two parties, the government and people of the two countries. Nations on both sides.

"It is important that on both sides of the border, local authorities play a vital role in fostering close ties and joint sports programs that enable this relationship to solve all problems," he said. Other things happening along the border. ”

At the same time, he stressed that not only the territorial authorities, the two armies of the two countries should foster closer relations because when there is a close and whatever issues can be resolved and discussed.

For his part, Bun Nang Vichit said that Cambodia and Laos have always been close friends and help each other. In this sense, the two countries are the same neighbor, the same fence, the good neighbor, and the growth of the mutual trade better and more secure. Also on the border.

He said that over the past two years, he has seen that Cambodia has been growing very fast, and Cambodians are living a better life.