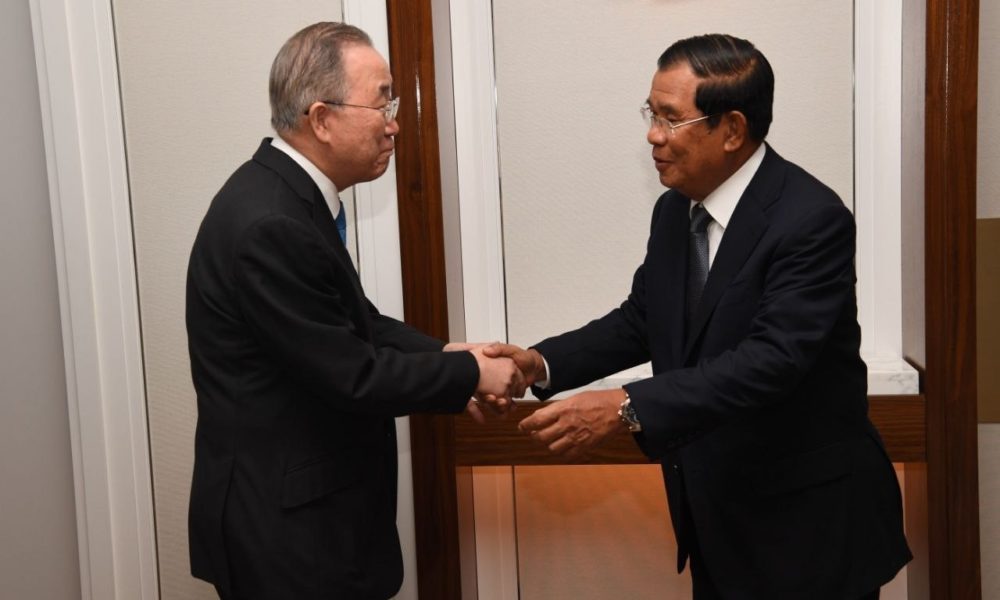 Phnom Penh: Former UN Secretary-General Ban Ki-moon, who is now president of the Green Growth Institute, expressed his appreciation for the leadership and involvement of Cambodia's Prime Minister Samdech Akka Moha Sena Padei Techo Hun Sen, who led the country to continuous growth. According to the AKP.

During a working meeting with Prime Minister Hun Sen on the afternoon of February 4, 2020, Ban Ki-moon indicated that he was always pleased with what the Prime Minister has done, which has had a positive effect on the country and its leadership. At many global forums, Samdech's attitude has always been positive.

He emphasized that he had always respected the leadership of Samdech Techo since he was Foreign Minister of the Republic of Korea until becoming Secretary-General of the United Nations.

Samdech Akka Moha Sena Padei Techo Hun Sen always remembered that the Secretary-General had joined Cambodia in facilitating the sending of peacekeepers under the UN umbrella and the process of prosecuting Khmer Rouge leaders.

During Ban Ki-moon's tenure as UN Secretary-General, there has been a lot of change in the work between Cambodia-UN cooperation and the United Nations.

He noted that not only was Cambodia preparing for the trial of the Khmer Rouge leaders, it had also borne the costs of national security and the sending of UN peacekeepers.

He said that the Koreans and he personally were pleased to see the increased cooperation between Cambodia and Korea, especially with the support of Cambodia for the stability of the Korean Peninsula.

He wants to see Cambodia continue to support climate change, especially in promoting sustainable use of green energy.

Samdech Techo Hun Sen has asked Ban Ki-moon to send a special official from the Global Institute of Green Growth to help Cambodia catch up with the green economy.