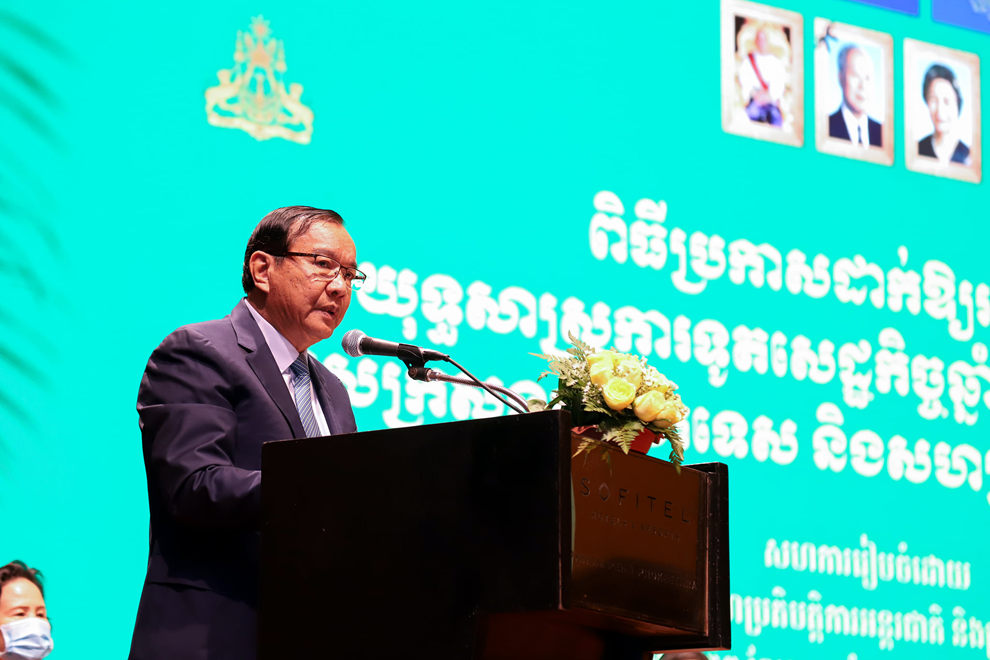 
Phnom Penh: Foreign Minister Prak Sokhon inaugurates the 2021-2023 Economic Diplomacy Strategy, which focuses on four areas and the “Taste of Angkor” cookbook Or The Taste of Angkor for Cambodian diplomats to practice and diversify the economy beyond traditional diplomacy.

Speaking at the launch of the strategy on January 18, Mr. Prak Sokhon confirmed that the economic diplomacy strategy focuses on a number of major goals. These include promoting international trade, attracting foreign direct investment, promoting tourism and promoting cultural exchanges, as well as promoting In front of Khmer food as well. This strategy has been in place for more than two years.

Implementing this strategy, the Ministry of Foreign Affairs acts as a facilitator and promotes existing mechanisms to attract foreign direct investment, boosting growth. Do bilateral and multilateral trade and attract tourists by strengthening Cambodian cultural values ​​abroad. The Ministry is also the developer of a new generation of professional diplomats with high capacity, active in protecting and promoting national interests in all fields.

For more than two years, the Ministry of Foreign Affairs and International Cooperation has been working to promote economic diplomacy through capacity building, human resources training, Professional diplomacy, collection and compilation of information on economics, trade, investment and tourism. This is according to Mr. Prak Sokhon.

He said that all this is for diplomats to use and communicate with guests, business people, citizens and leaders of friendly host countries. In addition, the bulletin board will be used when attending trade fairs, cultural events, presentations, attracting investment and facilitating trips and proposals. Of foreign businessmen and companies.

He described Cambodia as being affected by the Kovid 19, the influence of the superpowers' competition, as well as the removal of the 20 percent EBA By the European Union. But Cambodia has put in place sharp strategies and reforms to help investors and revive the economy.

"The situation described above further underscores the accuracy and urgency of changing the way we work," he said. Traditional diplomacy is the focus of economic, cultural and tourism promotion, ie the implementation of a foreign policy that takes Economic prosperity is at the core. "No country can succeed without making economic issues its main agenda."

He also asked Cambodian embassy officials to choose dishes from The Taste of Angkor to receive guests with more than 30 dishes, including prahok. Puff and Amok. This book will also be given as a souvenir to guests so that they can try Khmer food.

Mr. Long Dimanche, Cambodian Ambassador to the Republic of Korea, stated that under the assistance of the Ministry of Foreign Affairs of the Kingdom of Cambodia, he himself and diplomats in Other embassies have gradually implemented this strategy. His work includes providing information and coordinating with the private sector in Korea to understand the investment climate in Cambodia. According to Mr. Prak Sokhon, the embassy official is a sales agent. However, with this strategy book, it will become a much clearer compass.

"Well, for all of us to work towards the four goals, it is up to all of our diplomats," he said. "There are clear bases, such as guidelines, policies, on what areas of economic diplomacy do."

Mr. Kin Phea, President of the Institute of International Relations of the Royal Academy of Cambodia, said that such a strategy is a reform of diplomacy from traditional to diplomatic. The economy in which Cambodian diplomats are abroad not only represents Cambodia politically, but also attracts investors. Eat in Cambodia.

"Finally, we see the Ministry of Foreign Affairs working to encourage more capable diplomats to represent Cambodia's interests in all areas," he said. "Political, economic, cultural, educational and other fields."

He said the reforms stemmed from the political will of the government, the efforts of the foreign ministers and in line with the evolving situation in the region. And the world.