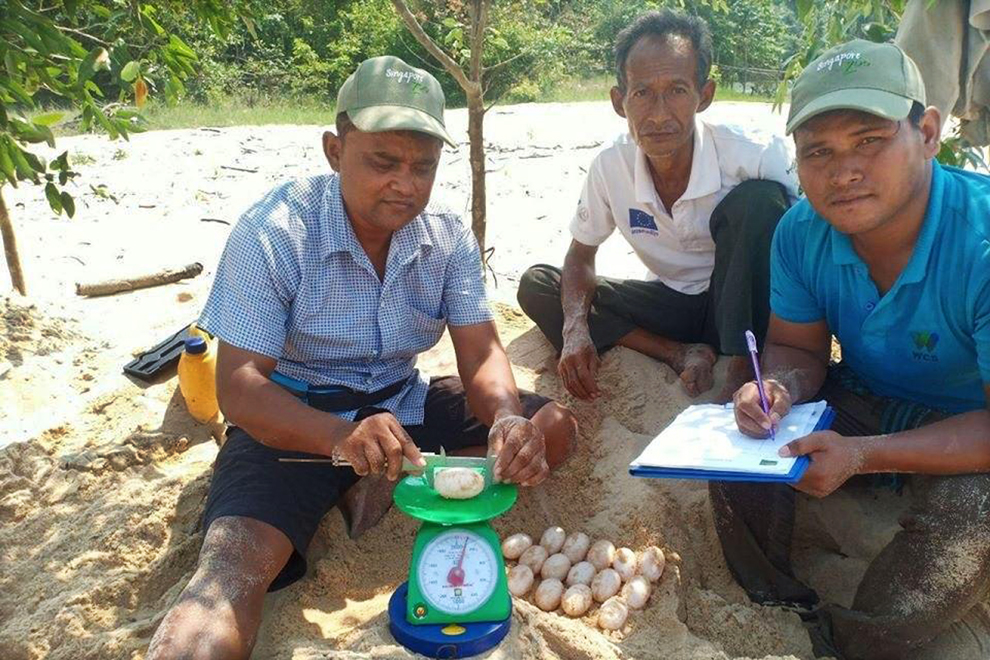 
Koh Kong: Wildlife Conservation Society (WCS), conservationists from local communities and fisheries administration officials have found turtle nesting, or turtle nests. A total of 51 nests are equal to 51 eggs in Prek Ambel salt farm, which experts are monitoring for health and safety. Officials and civil society also called for the participation of the turtle.

Ken Serey Ratha, president of the Cambodian Wildlife Conservation Society, said yesterday that fishermen in the area saw traces of the turtle's feet. This comes into its nest and then reports to fisheries officials and WCS for review and research. Meanwhile, specialists are working to maintain the eggs for a period of time to monitor the health and safety of the eggs. Self or need technical assistance. After hatching, they wait for it to feed itself, then take it out to the salt marsh.

He added that following the circular and announcement on July 10, 2017, the Ministry of Mines and Energy stopped all dredging activities along the system. Prek Sre Ambel Observe By January 2020, the number of turtle nesting has increased compared to four years ago, which was only 1 year. Only.

“Today we have no technical constraints, but we face development problems, which means sand development. That leaves turtles and some other rare animals at risk of loss. But now the dredging business is banned in the area, so turtles can breed. I want all of us to consider development and conservation issues together. Because it's the same thing, I'm not opposed to development, but let's think about conservation. ”

Inhul, deputy director of the Fisheries Conservation Department at the Fisheries Administration, said his team has been working with the WCS from 2000 to present. So far, the royal egg has been found, but only one or two nests. By 2020, the team has found three nests at once.

So far, there have been many dredging activities which have resulted in a decrease in the number of rare wildlife and challenges in the area of ​​the creek, he said. This salt field.

“In the past, we didn't really find the royal turtle because last year there was a lot of sand business, so it affected Fertility of the turtle. Last year we found one or two nests a year, but when it was banned from dredging in Sre Ambel. "We just found three nests at once, so I think it is more than last year."

Remarkably, the turtle was included as a reptile representing Cambodia on March 21, 2005. The animal was previously thought to be extinct, but in 2000, the Koh Kong Fisheries Administration and the WCS conducted a search and search. Very little is found on the Prek Ambel Prek system in Koh Kong.

Following its discovery in 2001, the Fisheries Administration and the WCS organized a nest protection program by recruiting former turtle egg collectors. Come and work as a project worker to find and protect nests instead of collecting eggs for sale.