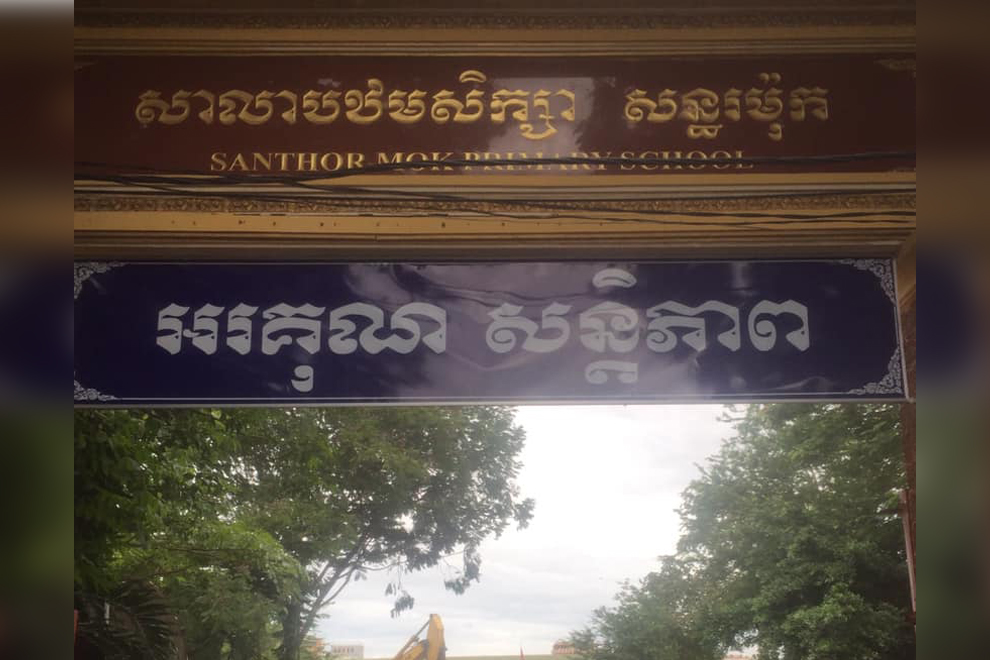 
Phnom Penh: Phnom Penh Department of Education, Youth and Sports plans to change a teacher to work elsewhere after being found to be involved in irregularities demanding money from students At Santhor Mok Primary School. The move comes after a Facebook post criticized parents by students that teachers only care about money and not virtue. Take 60,000 riel per month.

The director of the Phnom Penh Department of Education, Youth and Sports, Mr. Hem Sinareth, said yesterday that the Department of Education and the management of Santhor Mok Primary School will take measures to change the workplace of A teacher involved in taking money from students to work elsewhere. But he did not confirm the teacher's identity.

"We can only tell you that the department has changed administrative measures, but do not use their names when using their names," he said. "They are not worthy."

On February 1, the director of the department said that he told the team to take one step to solve the problem and go to an educational meeting to introduce Legal issues for all teachers in Santhor Mok Primary School. He said that if such cases are found, there will be measures without exception.

Iv Bunthoeun, a parent of a child at Santhor Mok Primary School, wrote on his Facebook account on January 28 that his daughter The teacher was expelled from the class, saying that if he did not study, he should go to another teacher at Santhor Mok School. Not studying should also be paid. He stated in the letter that the tuition fee should be 60,000 riels per month.

Srey Net, another student's guardian, posted on Facebook on January 30 that her youngest son was in sixth grade at school. Santhor Mok, the teacher demanded 60,000 riel from the first day of school. She asked about the payment and received the answer that it was a payment of parental gratitude to the teacher she watched and taught. .

"Oh! I'm upset because I do not want to talk to him much," she said. There is more that he said to me. Loss of respect for Aling, then asked for 20,000 riel each to buy a fan, and his class of more than 30 students. I would like to ask stupid questions about the money to buy a fan, buy it every year, as long as you go to school, collect it and do not understand.

6th grade student of Santhor Mok Primary School said that there is a case of teachers taking monthly money in exchange for teaching more knowledge . The group of children said that the payment for the teacher can be paid once every half month or once a month.

A group of students who met directly with the Post on February 1 said on condition of anonymity: All of them can not enter and can not attend school without paying money, they have to pay 60,000 Riel per month for study Should be for the fifth grade to study or not, but the sixth grade can not study.

Teachers and principals of Santhor Mok Primary School did not comment on this issue, but Mr. Preap Kompheak, director of the primary office of the Phnom Penh Department of Education. He said after the meeting closed in the morning at the school on February 1 that in the meeting he showed the law to the staff All education, especially teachers.

"We presented him with legal laws, such as the education law, the anti-corruption law, the general statute, the civil service, the instructions," he said. Other of the Ministry of Education, which recommends to prevent abnormalities and the Department of Education's guidelines to prevent teachers from affecting students. "

According to Mr. Preap Kumpheak, for those who have committed legal wrongdoing, it is stated according to the level of wrongdoing that the person has committed. He continued: "First, whoever commits any mistake can only be educated, instructed and contracted to stop that act. . The second point can be to force him to move to work, the third is to freeze his salary, and another point if it is serious is Stop from the framework.